Is Britney Spears the Esther of our time? 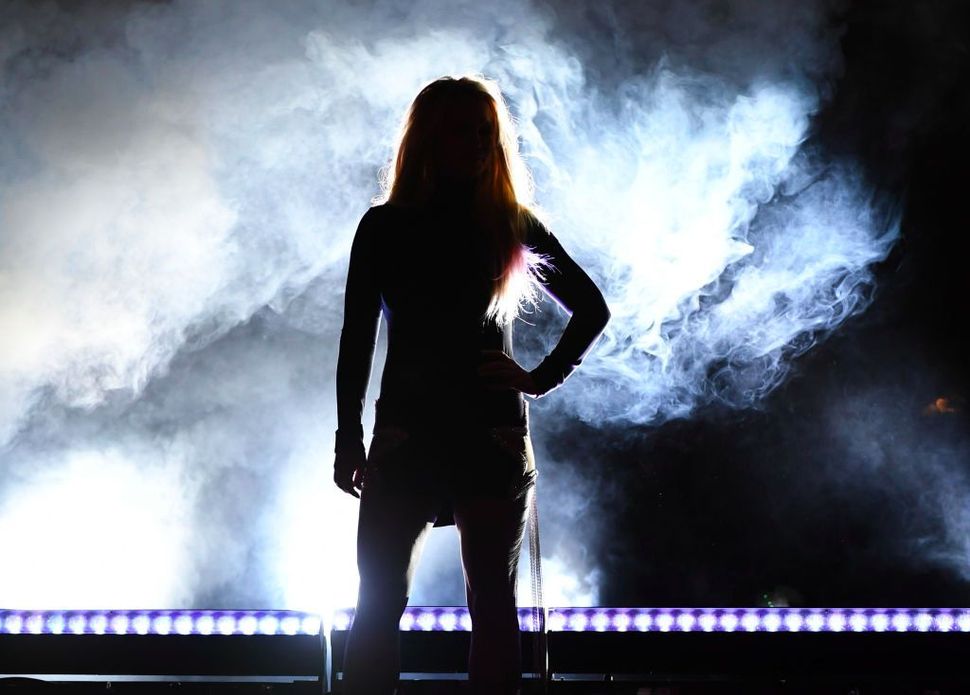 The pop star is a person, not an archetype. Image by Getty

The year was 2004. I was nine years old, and my access to pop culture was, in a word, limited: I consumed only the most age-appropriate public television programs and labored under a delusion that car stereos were exclusively intended for playing the “1776” soundtrack.

But when Britney Spears got hitched in a pair of blue jeans, I somehow still found out about it.

I have no idea how news of Britney’s short-lived Las Vegas marriage made its way to me. But I clearly remember concluding, like every callous tabloid and talk show host, that she was “crazy,” out of control, a walking contradiction to the household maxim with which I grew up: “Think for yourself.”

That didn’t mean I didn’t love her. I begged my parents for her CDs. I mouthed her lyrics, cryptic but obviously transgressive, on the bus. With my best friend, I devoured the music video for “Baby One More Time,” in which Britney, dressed as a sexy schoolgirl, struts the halls of a pretend campus. We imitated her by choreographing our own dance routines, which we then forced our nonplussed mothers to watch.

Dancing to Britney was thrilling and extremely weird, because she was both a role model and a “bad influence.” In her music videos, she presented one vision — romanticized, alluring, intimidating — of what it meant to move through the world in a female body. And I, as a future woman, had to decide how to relate to it. Would I be best served by emulating this archetype or repudiating it? What kind of statement would I be making, either way? In Britney, I was looking for some sort of parable. But I grew out of my choreography phase before I could find it.

I revisited that childhood moment with the release of “Framing Britney Spears,” a New York Times documentary about the incessant and exploitative media coverage that eroded the pop star’s mental health and precipitated the controversial conservatorship that now governs her life. I doubt that Samantha Stark, the film’s director, timed its release to coincide with Purim, but the documentary has undoubtedly arrived in time for hamantashen season. Maybe that’s why the singer’s legacy seems to echo that of another woman whose sexuality has beguiled and discomfited for millennia: Esther.

In her own time and long after, Esther’s use of beauty and charm to save the Jews constituted a model of womanhood. Possessing feminine virtues in abundance, she used them as directed by the men around her to strengthen the position of her people — what could be better? The Talmud elevated Esther at the expense of Vashti, her predecessor, who was banished by Ahasuerus after refusing to dance naked for his friends. In centuries of commentary, she emerges as Esther’s sexual foil, a licentious woman in whom malice and sexuality were inextricably entwined.

But Vashti’s disobedience, her refusal to make herself sexually available, made her a compelling figure for feminists as early in the 19th century. As her star rose, Esther’s fell. The deployment of feminine wiles, no matter how noble the ends, was outmoded and unfashionable; As Rabbi Susan Schnur wrote in a 1998 feature for Lilith, Esther’s intercession with Ahasuerus only showed that she had “no power for herself.”

Recently, feminists have returned more sympathetically to Esther. In the wake of #MeToo, some have pointed out that she was a victim of what we would now call sexual abuse. (Like many other Jewish kids, I learned in Hebrew school that Esther competed in a beauty contest to win Ahasuerus’s hand; in fact, the Megillah describes something more like sexual trafficking.) Others see her as a canny strategist, someone who embraced her sexuality not to please men around her but to achieve her own ends.

Britney has spent far less time than Esther in the public eye. But, albeit in a much-condensed timeline, her image has undergone a similar series of reversals. As a young star flashing her midriff in “Baby One More Time,” she telegraphed a brand of femininity — sexually “pure” yet available for public consumption — that has retained popularity since Esther’s day. Like Esther, she suffered a fall from favor when people started to see her as contravening, rather than reinforcing, preferred norms. For some, she typified the disintegration of so-called family values: decrying Britney as a bad influence in 2003, Kendel Ehrlich, then the first lady of Maryland, said she’d “shoot” Britney if given the opportunity. For women craving a less completely sexualized pop culture, derision for Britney also came easily. I was one of them — by the time I was a teenager, my days of dancing to “Baby One More Time” were a mere pitstop in the feminist autobiography I was crafting for myself.

Now, the tide has turned once again. A grassroots movement going by the hashtag #FreeBritney is advocating for the end of her conservatorship. After watching “Framing Britney Spears,” hundreds of celebrities and ordinary people posted in solidarity. Even Britney’s former boyfriend, Justin Timberlake, who for years boosted his own profile with locker-room jokes about their relationship, issued a mealy-mouthed apology.

We are sorry Britney. For the horrible tabloids, the uncomfortable interviews, the scathing remarks, and the dehumanizing stares. We’re sorry for the scary experiences, and we’re sorry you can’t fully be who you want to be. #FreeBritney

As Esther has come to embody modern feminist concerns, current commentators now see in Britney’s life hallmarks of both agency and abuse. “Framing Britney Spears” steers towards the former narrative, portraying Britney as knowingly and unashamedly embracing her own sexuality in a way that uplifted female fans. Reflecting on her popularity, Times critic Wesley Morris hypothesized that “it isn’t the sex part that seems cool. It’s the control and command over herself and her space that seems cool.” Women like Mara Wilson and Tavi Gevinson, both of whom who enjoyed-slash-endured fame at a young age, critiqued that perspective. In an essay for The Cut, Gevinson argued that it’s hard to see much personal agency in the story of a teenager navigating “an economy where young women’s sexuality is rapidly commodified until they are old enough to be discarded.”

Changing perceptions of Esther reflect social change, but they also demonstrate our tendency towards totalizing narratives about women — our desire to reduce a complex character to an empowered agent or a passive victim, to assert once and for all that female sexuality is suspect or sacred.

The beauty in Britney’s unconcluded story is that it refutes the notion that we can find moral parables in women’s lives. After finishing “Framing Britney Spears,” I watched the “Baby One More Time” music video for the first time in over a decade. It’s a cultural artifact in which a young woman both refracts and riffs on old tropes. It’s a performance that highlights an artist brimming with talent and poise, yet obviously enmeshed in a money-making apparatus that must complicate her every action. It will not tell you anything about what kinds of women think for themselves.

Watching Britney dance, I thought of the impossibility, in a culture with such stern and conflicting ideas of how a woman should be, of neatly categorizing one’s actions as “empowered” or “disempowered.” I thought of the unending analysis of her outfit, which is not dissimilar to the suspicious way I interrogate my own quotidian choices — how I dress, how I walk, button up, button down. Like most other women, I make these little decisions constantly. I’m usually happy with them. But I don’t quite know how much personal agency is involved, and I doubt I ever will.

If there is some sort of “meaning” in Britney’s life and work, it’s one that’s simultaneously sobering and freeing. It’s something that I must have sensed as a nine-year-old, gyrating ungracefully to her music with trepidation and delight: There’s no way, in this world, to swivel your hips without subtext.

Is Britney Spears the Esther of our time?