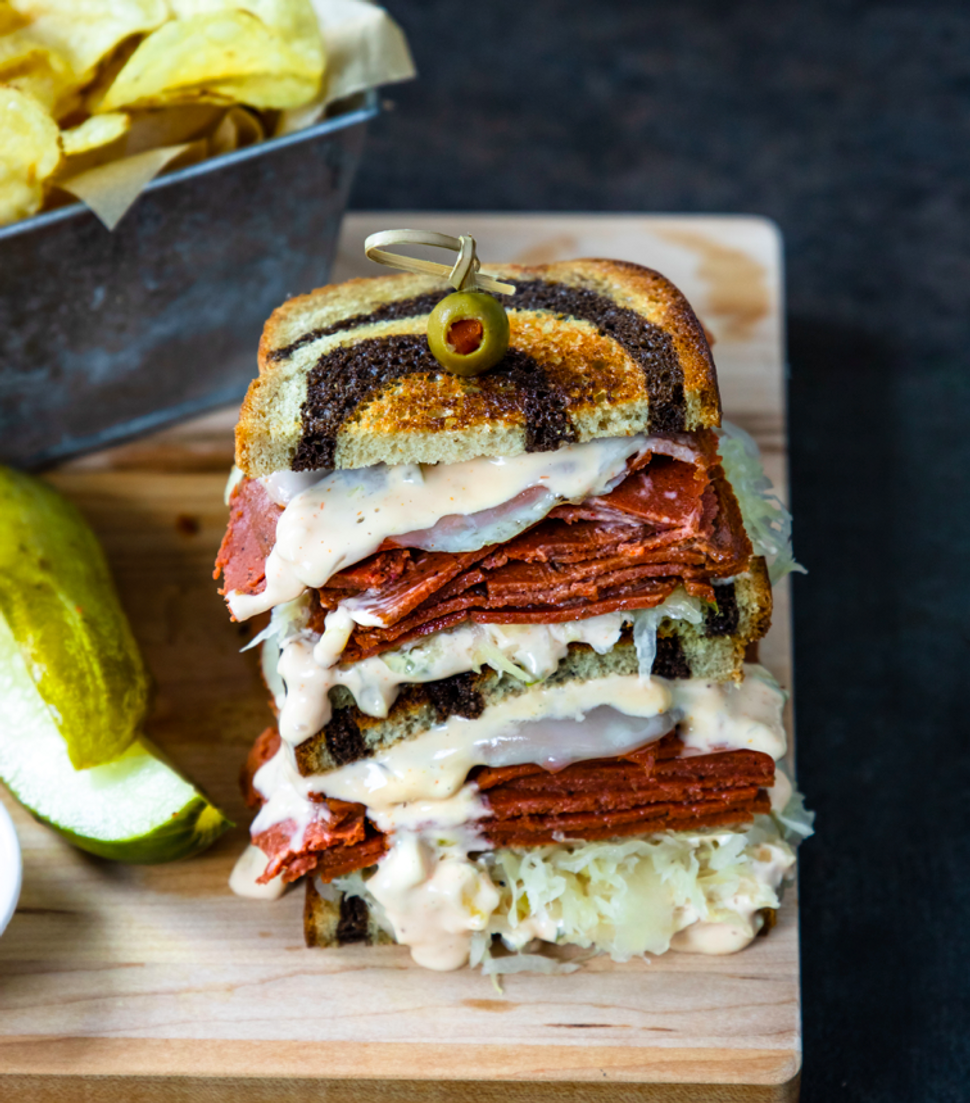 I had an unreal Reuben last night.

The Reuben was very good, but I’m using the word in its literal sense, because this was one seriously devious sandwich. Nestled between the sauerkraut and melted cheese were slices not of corned beef but “Corn’d Beef,” the signature product of Mrs. Goldfarb’s Unreal Deli, an upstart line of substitute meats infiltrating deli counters across America.

We’ve had our fair share of seitan debacles at the Schmooze, and we’re well aware that there’s no turn of phrase that will make an item called “Corn’d Beef” sound remotely appealing. But we’re here to tell you it’s actually pretty good. And although you really should trust us when it comes to the world of novelty Jewish foods, you don’t have to take our word for it — because if Mrs. Goldfarb has her way, Unreal Deli will be making its way to a supermarket near you.

Mrs. Goldfarb, whose smiling visage adorns every Unreal Deli package, is a culinary ideal, a metaphorical melding of classic Jewish foodways and a wellness-era distaste for sandwiches that dribble trans fats on the table. Outfitted in a Mrs. Maisel get-up, she offers modern-day Jews a way to enjoy mid-century staples without abandoning ethical and environmental concerns about the meat industry.

She’s also a person: 39-year-old Jenny Goldfarb, an accidental entrepreneur with exactly the New York accent and kabbalistic wisdom you’d expect from a woman who has devoted her life to vegan deli. 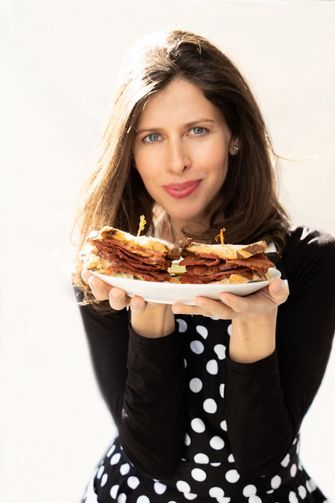 The descendent of a Lower East Side deli owner, Goldfarb grew up as a self-described “Seinfeld-and-bagels type Jew,” cultivating a taste for cold cuts without connecting them to her heritage or thinking that much about how they were made. But a year studying Kabbalah in Israel made her more “sensitive to the universe.” When, as a young mother living in Los Angeles, she started researching the devastation of factory farming, she felt personally responsible to change what she saw.

“My heart was broken,” she said in an interview. “And I felt like I was hoodwinked, duped into thinking this was normal.”

Neither Goldfarb’s husband nor her two toddlers were enthusiastic about the prospect of going vegan. To make the change more palatable to them, Goldfarb threw herself into creating faux protein at home, using vegetable purees mixed with wheat gluten. Her take on deli meat, which she brined in traditional spices, was especially successful — even her initially suspicious in-laws gave their blessing.

Encouraged by friends to turn her hobby into a business, Goldfarb rented the tiniest commercial kitchen she could find in Los Angeles. There, she cooked up batches of vegan meat and drove them around to the city’s major delis. Later that year she got a boost by appearing on the investment reality show “Shark Tank,” where Mark Cuban decided to take a chance on the company.

The coronavirus pandemic wreaked havoc on the business’s plans for expansion. But with deli dining on pause, Goldfarb shifted her focus to supermarkets, placing Unreal Deli in Wegmans and Whole Foods and lining up future contracts with other major chains.

“We turned a bit of an obstacle into an opportunity,” Goldfarb said.

I found my vegan Reuben at Sarge’s, one of the few New York delicatessens that currently offers Corn’d Beef and its sister protein, Roasted Turk’y. Its texture was seriously impressive: While I knew that “Corn’d Beef” consists primarily of chickpeas, beets, and tomatoes, I felt like I was biting into meat that had been hand-sliced by a seasoned deli employee.

That’s not to say that Unreal Deli perfectly approximates an old-fashioned Reuben. Missing from the vegan experience were the piquant, peppery flavors I associate with Jewish deli, as well as the grease that sets a Reuben apart from pedestrian club sandwiches. If an open-faced deli sandwich is a weekend treat, Unreal Deli is its sober, weeknight-friendly cousin, best served with extra helpings of sauerkraut and Russian dressing.

Even after my experience with Unreal Deli, I remain an only-sort-of-repentant carnivore. But Goldfarb’s ability to get on the menu at New York’s legacy delicatessens, a notoriously tradition-bound segment of the city’s culinary scene, is a testament to the uncannily meat-like quality of her creations. I’ll be happy to add Corn’d Beef into my deli rotation — that is, until I’m ready to quit meat cold “turk’y.”