The Jewish Netflix show you haven’t heard about yet 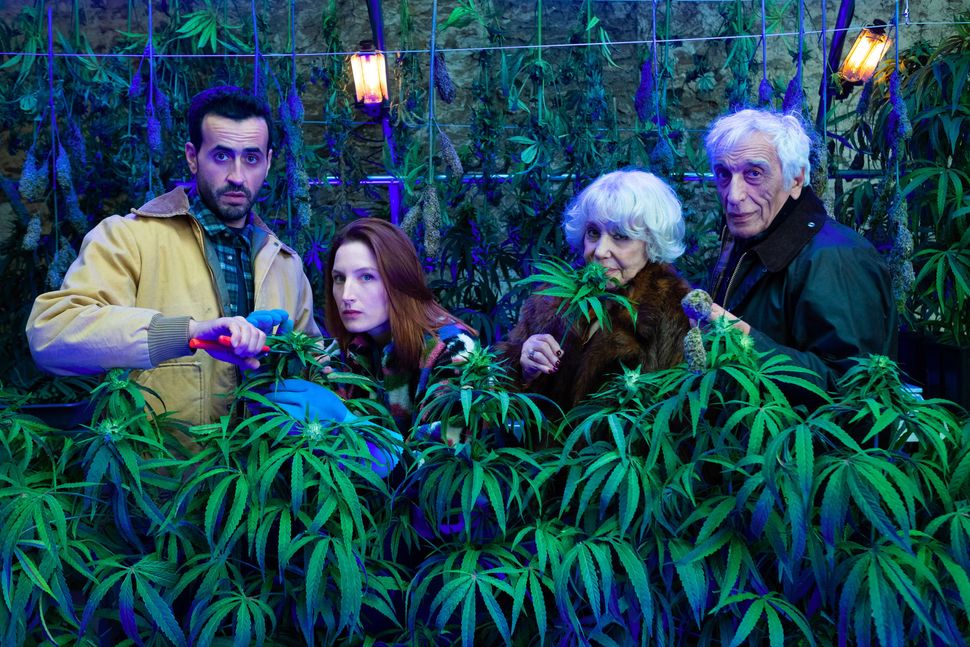 Note the proliferation of barn jackets. Image by netflix

“Family Business,” Netflix’s latest and most valiant stab at the Jewish sitcom, is many things. It’s a sort-of-kind-of compelling portrait of a family in crisis. It’s a confused comment on the current state of French Jewry. It is, depending on how you look at it, an argument for or against the legalization of marijuana.

But mostly — and this is probably the most important thing you need to know about the show — it’s a six-hour advertisement for Carhartt outerwear.

While watching the show, which follows a family of Parisian Jews as they try to convert their kosher butcher shop into an underground marijuana operation, I tried to keep track of the number of Carhartt garments appearing on the screen. But 15 minutes into the first episode, I had already lost track. Whether they are disowning their children, procuring marijuana cuttings from their erstwhile lovers, or banging down the doors of their estranged-but-secretly pregnant girlfriends, every single character in this show is clad in a hardy barn jacket or a hardy indoor-outdoor fleece. There are also, it goes without saying, a number of beanies in circulation.

The sophomore effort of French screenwriter Igor Gotesman (known for a previous French series “Castings”), “Family Business” may be most notable for its reflection of Carhartt’s evolving cultural status: once the purview of non-toxically masculine dads who always have extra flashlights on hand to the hallmark of hipsters who wouldn’t know an allen wrench from an adjustable spanner.

But alongside all this sponcon, there’s something like a plot unfolding as well. The show revolves around the Hazan family, who can’t decide what to do with their ailing kosher butcher shop. Gérard (played by Gérard Darmon, himself of Algerian-Jewish origin), the family’s stubborn and toxically masculine patriarch (seriously, this man does all Carhartt wearers a disservice) lives in financial denial and refuses to change a thing. Aure (Julia Piaton), the daughter whose rebellious nature is signified by a) her queerness, which is never explored in any meaningful way, and b) the fact that she sometimes wears a North Face parka, wants to get out of the business altogether. Meanwhile, prodigal son Joseph (Jonathan Cohen), a fount of get-rich-quick schemes who spends 80% of his time saying “Let me explain,” argues that with rumors of cannabis legalization flying about, the family should transform the butchery into a marijuana cafe.

Every sitcom needs its plucky sidekicks, and the Hazans have Enrico Macias, a real-life Algerian singer and legendary figure among French Jewry who plays himself, and Clémentine (Louise Coldefy) a crazy-influencer-with-a-heart-of-gold. (Yes, this is a trope now and we all have to live with it.) Together, this unlikely team embarks on a vexed quest to turn “Hazan’s Meats” into “Hazan’s Weeds.”

“Family Business” is studded with casual Jewish references and symbols, which feel like little gifts in a cinematic world that rarely features workaday Jewish life onscreen. In the Hazans’ delivery truck, a hamsa hangs from the rearview mirror. The Hazans eat kishke made by their Ashkenazi grandmother but also mloukhiya, a North African vegetable inherited from their Sephardic ancestors. They name their strain of marijuana “Pastraweed.” Pretty much every interior shot contains a tray of kiddush cups and a menorah. (Oddly, the show’s creators chose six-branched menorahs, which are more common as early Israeli memorabilia than ritual objects in modern Jewish homes.) As the show ramps up, the Yiddishkeit only gets weirder: In one scene, the mourner’s kaddish is recited over several garbage bags of waterlogged marijuana, a moment that is supposed to convey catharsis and familial unity but in fact resembles a stress nightmare I might have had while preparing for my bat mitzvah.

But while the show delights in Jewish culture, it never goes beyond gesturing at the problems facing French Jewry today. It doesn’t explain why a kosher butcher shop that once flourished in Le Marais is no longer viable. It doesn’t contextualize the powerful old-country nostalgia that Macias induces in immigrant Jews like Gérard. The Hazans’ oldest friends are a family of French Arabs including the accomplished lawyer Aïda, whose on-again-off-again relationship with Joseph is a prominent subplot. But “Family Business” has nothing to say about what it means for Jews and Arabs to form families at a time of increased antisemitism and hostility towards religious Muslims. (The show’s first season takes place in 2019, but this question feels especially relevant now, when the French government is weighing legislation that would bar Muslim minors from wearing hijabs.

I wanted the show to take on all (or any) of these issues. Instead, I was just tempted into buying a barn jacket.

The Jewish Netflix show you haven’t heard about yet