Being famous comes with obligations — meet-and-greets, red carpets, late night shows. It might sound glamorous, but also, sometimes, you’d rather curl up on the couch and watch “Curb Your Enthusiasm” and fall asleep.

At least, that seems to be how Larry David feels about it. During New York Fashion Week, which concluded on Sunday, David was seen by The Cut’s Emilia Petrarca plugging his ears in the front row of a runway show for the brand STAUD.

“Larry David should come to fashion week more often, I really think he’d enjoy it,” Petrarca captioned a video of him posted to Instagram.

According to my brother, who used to do lighting for NYFW, runway shows are rarely longer than 12-15 minutes, and sometimes even shorter — not a lot of time to endure loud music or bright lights. Yet David couldn’t make it through without hunching over to cover his ears with both hands, staring at the floor. Why bother attending at all if 10 minutes is too much to tolerate?

Some people have hypothesized that David might have been plugging his ears to take a phone call, as we can’t see his other ear in the video — but what phone call can’t wait 10 minutes?

The grumpiness, however, does not indicate that David has no interest in fashion — in fact, he has a fully-fleshed out style that he’s quite particular about; he is, after all, the son of a garment-district salesman. His fashion may look plain, but he has strong opinions — his undershirts go for $65 a pop, and the collars have to sit just right, according to Leslie Schilling, series costumer for “Curb Your Enthusiasm.” And, of course, his trademark Oliver Peoples glasses are iconic.

“He prefers neutral colors and solids, not patterns; he likes to be warm, hence his penchant for layering; he prefers long sleeves over short sleeves,” Schilling told Vulture. “He loves to feel the fabrics, so he definitely bases a lot of his choices on that.”

But the models at the STAUD show were frequently wearing bold, tropical prints and bright colors, with nary a long sleeve to be seen. A fashion faux-pas! Perhaps David couldn’t bear the horror.

Plus, many of the outfits featured cleavage and some were even completely see-through. These, too, would be no-nos for David, who tells a prostitute in season nine of “Curb,” that “people like a mystery,” and advises her to “put the tits away.”

Despite his passion for fashion, NYFW seems like the wrong place for someone like David, who told GQ that his fashion philosophy is that “one should wear only one ‘nice’ piece of clothing at a time.”

“Otherwise it’s too much,” he said. “Too dressed. You have to be half-dressed.” (One has to wonder what he thought of Jared Leto, who was seated close by in head-to-toe tie-dye.) 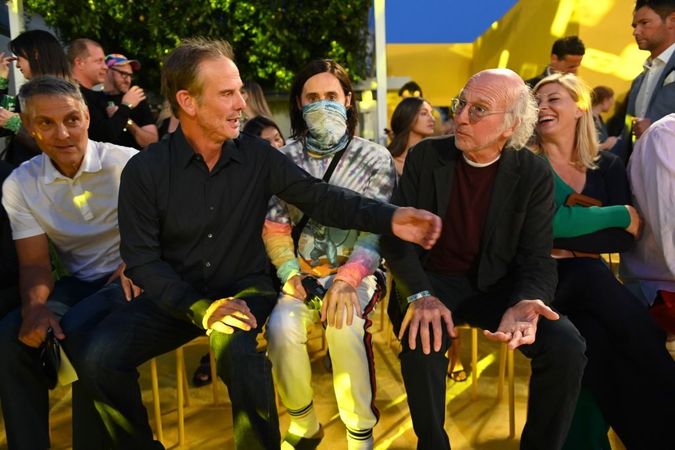 That philosophy is more or less the exact opposite of a runway show, where designers are trying to cram as many pieces as possible from their new collections into an incredibly short period of time. Bold looks, whether clothing, makeup or hair are generally the name of the day — they’re not generally looks that the average person would flaunt. The STAUD show was, relatively speaking, tame.

This is not the first instance of David seeming cranky at a public event. He was also seen plugging his ears during the applause at the U.S. Open, though he watched with a frown during quieter moments.

It’s all such quintessential Larry David behavior that some people on Twitter even hypothesized that he was filming for “Curb Your Enthusiasm.”

But it’s hard to say; the show is semi-autobiographical, after all, and it doesn’t seem like David is acting much at all.