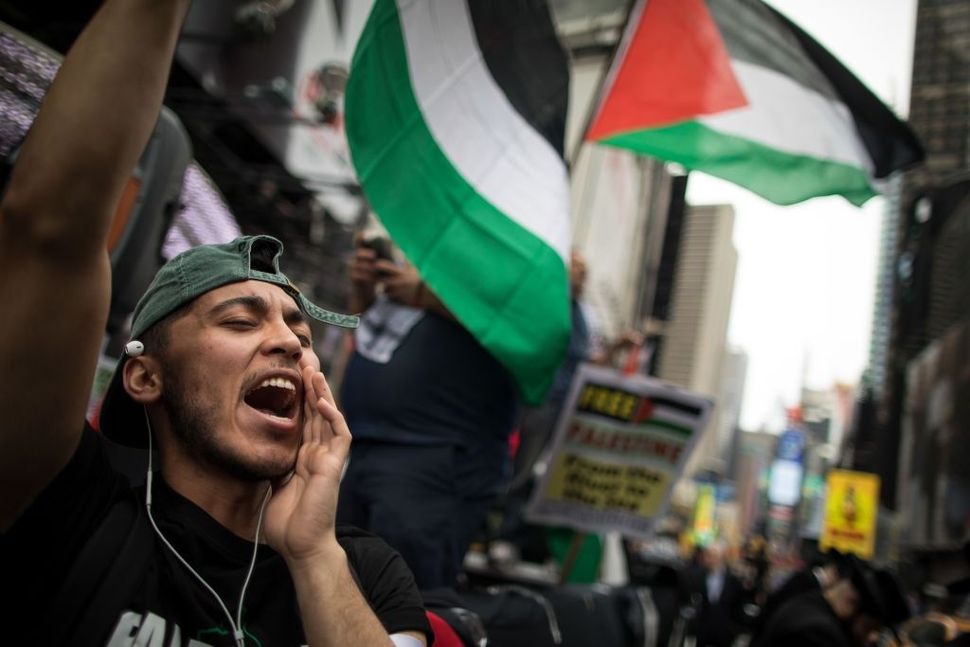 Members of the Palestinian community, fellow Muslims and their supporters rally in support of the Palestinian people in the wake of the recent violence in the Gaza Strip, during a rally in Times Square, May 18, 2018 in New York City. Image by Getty Images

In April, Barnard College’s student body and George Washington University’s student government both voted to encourage their respective Boards of Trustees to divest from companies affiliated with Israel. They joined over thirty other campuses who have passed similar resolutions aligned with the Boycott, Divestment and Sanctions movement.

The BDS movement was founded in 2005 and endorses “ending Israel’s occupation and colonization of all Arab lands and dismantling the Wall,” recognizing the “fundamental rights of the Arab-Palestinian citizens of Israel to full equality” and “promoting the right of Palestinian refugees to return to their homes and properties.” In the past decade, BDS has spread across the country, and numerous student organizations such as Students for Justice in Palestine and Jewish Voice for Peace advocate for universities to divest from companies affiliated with Israel. Their campus activities include erecting apartheid walls to mimic the separation barrier in the West Bank and building mock checkpoints on main campus quads. Such forms of campus protest have affected Jewish students to varying degrees, and have pushed many Jewish institutions to respond. Pro-Israel organizations such as the Committee for Accuracy in Middle East Reporting in America and StandWithUs, in addition to the civil rights group the Anti-Defamation League, classify BDS as anti-Semitic. “The campaign is founded on a rejection of Israel’s very existence as a Jewish state. It denies the Jewish people the right to self-determination — a right universally afforded to other groups. In ADL’s view, this differs from legitimate criticism of Israel and is anti-Semitic,” the organization writes in its definitions of the terms “anti-Israel,” “anti-Semitic” and “anti-Zionist.”. Echoing this sentiment, Hannah Katz, a first year at Barnard, put it simply: “[BDS] is basically anti-Semitism in disguise as anti-Israel activity.”

But the impact of BDS — and its professed anti-Semitic undertones — on a student’s college experience is highly individualized, both to the student and to the campus. The Forward College Guide, which I’ve spent the past few weeks updating, measures the presence of BDS by tracking the status of BDS resolutions and whether they’ve passed or failed.

While this is the only concrete way to objectively monitor BDS on over 200 college campuses, the checkboxes do not provide a complete picture. There could be vocal anti-Israel activity on campus without a formal BDS resolution, for example, which would go unnoted in the College Guide. After speaking to student leaders on various college campuses of different sizes and in different regions, it became clear that anti-Israel activity does not create a uniform (presumably hostile) environment for Jewish students. A Jewish student’s experience on campus vis-a-vis Israel is influenced by multiple factors, ranging from their identification with the state, the incumbent student leaders promoting and opposing Israel and a student’s personality. While on-campus and virtual campaigns for and against BDS continue to rage, they should not be a factor in a prospective Jewish college student’s decision to attend one school over another.

One university Hillel president who asked to remain anonymous commented that the presence of numerous pro- and anti-Israel organizations on campus offer Jewish students an opportunity to contemplate numerous perspectives on the conflict. “I think it benefits people not to exist in an echo chamber — to be in the real world with a variety of opinions and to develop one’s own Israel opinions without being stuck in the AIPAC model,” they commented.

For one, there are some Jewish students excluded from the “pro-Israel” category entirely: those who support BDS. JVP, for example, is a visibly Jewish organization that promotes BDS on campuses across the country. Abigail Brook, founder of George Washington University’s JVP chapter, pinpointed the reason for her support of BDS. “People frequently misconstrue [the goals of BDS] as anti-Semitic or intending to remove Israelis from the land or cause harm to the state of Israel.” When discussing the effects of BDS on Israel or on Jewish students, she explained, “The problem is that we’re still focusing our narrative around Israel, but BDS is about Palestinians and protecting the human rights of Palestinians and the way we can make that happen.”

Addressing Jewish students concerned about BDS on campus, students I spoke to on numerous college campuses, including liberal arts colleges, state schools and elite private universities, urged prospective students to know the status of BDS on their campus without letting it influence their ultimate college decision.

Students on different campuses had varied personal responses to anti-Israel sentiment. Elan Kainen, a former Hillel President at Davidson College, highlighted a distinction between his identification with Israel and his response to attacks on Israel. “Having Israel makes me feel more strongly and passionately about my Jewish identity than going through all of the religious motions,” he said of his Jewish identity. Nonetheless, despite his connection to the state, anti-Israel activity on Davidson’s campus does not strike Kainen as particularly personal. “As Elan,” he said, “I never feel like I’m being attacked [by anti-Israel sentiment], but I sometimes feel that what I hold dear to me — what it means to be Jewish and to have a right to our own state and to defend it and not be treated with a double standard — is being attacked.”

Katz, on the other hand, felt that certain events hosted by Columbia/Barnard’s SJP and JVP chapters jeopardized her status as a Jewish student on campus. She recalled two events this year that resonated with her particularly — one asserting that “Zionists are racists,” and another called “‘I’ is for intifada,” as she described.“When I see somebody promoting BDS and participating in SJP and JVP’s activities, I feel personally targeted because they say that Zionists are racists and glorify the intifada,” she said of the occurences. “I personally don’t feel in danger, but I do think that BDS endangers pro-Israel students because it validates a movement that delegitimizes and denounces the only state of the Jewish people, which directly endangers Jews and pro-Israel students.”

Naomi Rosen, a second year at the University of Chicago, feels differently. “BDS doesn’t affect my life at all as a Jewish or pro-Israel student,” she commented.

All three students, in chorus with virtually all of the other students I spoke with, don’t feel that the presence of BDS should deter Jewish and pro-Israel college students from attending a particular school. Kainen remains staunch in his opinion that the presence of anti-Israel activity “shouldn’t get in the way” of a student choosing a college, and Katz highlighted the vibrant pro-Israel and Jewish life that exists on Columbia/Barnard’s campus. At the University of Chicago, Rosen noted that the effect of the BDS resolution, which passed in the spring of 2016, on Jewish students attending the college “is zero to none.”

Other students cited a sense of obligation to attend certain campuses so that they could defend Israel on campus despite the presence of BDS. Lara Tessler, Hillel president at Florida State University, feels that it is the “job” of proud Jewish and pro-Israel students to defend Israel. Other campus leaders also highlighted the importance of the presence of Jewish students on campuses that are seen as hostile to Israel, warning of a potential vacuum that could appear if Jewish students stopped attending campuses that host particularly intense anti-Israel activity: If Jewish students consciously avoided those campuses, there would be less opposition to anti-Israel activity that would only help BDS initiatives succeed on-campus.

Other campuses are known to have robust pro- and anti-Israel groups despite the presence of BDS. On Columbia and Barnard’s shared campus, BDS “puts a dent in the pro-Israel community and casts a shadow on our efforts,” Katz commented. “However, it shows that our work has a reason — to educate people about Israel.”

BDS activity on campus can also be fleeting, ending upon the graduation of a certain anti-Israel leader or a shift in campus priorities. Different campuses have come to be known as particularly hostile to Israel only to have thriving pro-Israel activity a few years later. Alternatively, a campus known for being free of BDS could change after a particularly passionate student enters.

The presence of BDS is by no means a perfect metric to gauge Jewish student life, or even pro-Israel activity, on a certain campus. Instead, a student may prefer to look for a club that aligns with their beliefs, or a variety of them to be able to sample different ideas. While it is important to be mindful of the presence of BDS, it should not be a deciding factor in a student’s college decision.