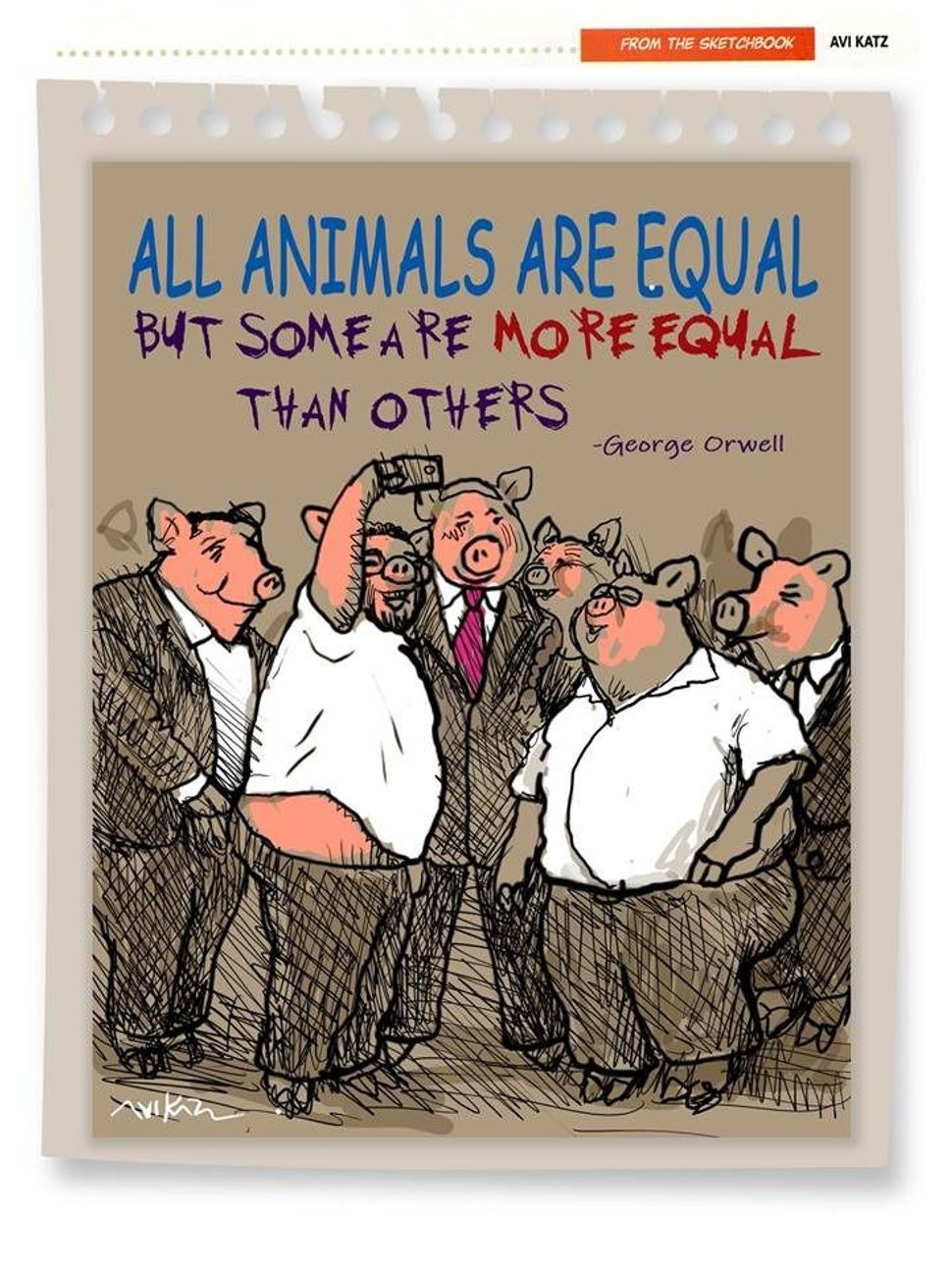 In a democracy, the media is responsible for providing the public with the information and context it needs to make informed political decisions. Last week, when The Jerusalem Post terminated its relationship with veteran illustrator and political cartoonist Avi Katz, it revealed that it has abdicated that responsibility.

Katz, who grew up in the U.S., is a world-renowned, award-winning illustrator and political cartoonist. Much of his work, and some of his most striking cartoons, are based in fine art or carry biblical references. He joined The Jerusalem Report (which has been owned by the Post since 1998) when it was founded in 1990, and has been there ever since.

After working for several years at the Post, I served as editor-in-chief of the Report from 2005-11. (Disclosure: I, too, was dismissed, and the reasons for my dismissal were never made clear to me.) As one of my first editorial decisions, I asked Katz to produce “From the Sketchbook,” a full-page political cartoon that showcased his talents and well-articulated political and social opinions; he continued to draw the cartoon until last week.

Katz’s drawings have always been strong, reflecting his deep commitment to social justice and equality and his deep hope for a better society. When a piece of his made me uncomfortable, he would patiently remind me that that a political cartoon is supposed to be thought-provoking and hard-hitting. When I thought a drawing was too hard-hitting, he would calmly note that a political cartoon is supposed to make us consider, and then reconsider, our political opinions, confront our biases and leave our comfort-zones.

Yet, as bold as his drawings were, Katz was always humble about the clout of his keyboard and pens. His drawings were never insensitive or provocative just for the sake of it, and there was always a reason for his often-jarring rhyme.

That cartoon is a parody of a widely-circulated photo by photo-journalist Olivier Fitoussi, in which a group of boisterous and triumphant MKs are taking a selfie immediately after the contentious Nation-State law was passed in the Knesset. In the eyes of many (including mine), this law has ensconced discrimination in Israel, making Israeli Jews “more equal” than non-Jewish Israelis.

In his cartoon, Katz reproduced the photo, caricaturing the politicians as pigs and adding the quote from George Orwell’s Animal Farm: “All animals are created equal, but some are more equal than others.”

Was the drawing tasteless? Apparently, in the eyes of some. Was it quintessentially Katz-in-your-face? Completely. Was it grounds for dismissal? Of course not.

At the time of writing, the public still does not know the reasons for Katz’s dismissal. An unidentified source was quoted in local media as saying that the dismissal was based on “editorial considerations.”

And the editor-in-chief, Steve Linde, who is presumably responsible for “editorial considerations” and presumably approved the publication of the cartoon, has not responded to this writer’s requests for comment. Apparently, the heads of the Report do not feel the need to explain the dismissal of a talented, award-winning, veteran illustrator and cartoonist.

From my terms working at both publications, and from reading the social media maelstrom over the past few days, I can suggest some possible reasons.

The cartoon, responders wrote on social media, is “offensive” and “anti-Semitic” because it makes a connection between Jews and pigs.

But by their nature, political cartoons draw on well-known cultural symbols to connect with their readers. The readers of the Report, according to its own data, have above-average educations and certainly must have read — or at least know about — Animal Farm.

Yet in the spirit of the Nation-State law, which sets Jewishness above all, those readers who complained were unwilling to connect to that association. They appear to be so ethnocentric and insular that, just like this current government, they cannot see that “not everything is about us.”

They were unwilling to accept that Jewish sensitivity to pig references doesn’t cancel out Orwell’s warning. Orwell’s allegory uses pigs. So Katz used pigs. I’m sure that if Orwell had written about aardvarks, Avi would have drawn aardvarks.

In a mature democracy, citizens must be able to make informed decisions based on information that they may not want to hear or read. It is the media’s responsibility to give them that opportunity, even if the readers and viewers don’t like it, and even if they threaten to cancel their subscriptions.

But the bottom line of income seems to be more important than higher democratic values. Real leaders should never pander to their publics and should bravely stand up for principles. Israel, however, is not a mature democracy and too many of the owners, publishers and editors of Israeli media are not brave.

I am also quite sure that the politicians portrayed in Fitoussi’s photograph and Katz’s drawing were less than pleased. Perhaps some of them complained to the owners? The Israeli police have recommended that Prime Minister Benjamin Netanyahu be indicted for his alleged attempts to illegally control the Israeli press and sway coverage in his favor, so it is clear that he expects the media to toe the line. But instead of standing up courageously and speaking truth to power, media moguls are kowtowing to prevailing political winds.

This pandering also creates a chill factor for all journalists and makes it much more difficult for us to do our jobs. Katz was dismissed over a single cartoon. Other journalists have been dismissed, warned or censured in similar ways in other media outlets.

Sadly, it isn’t Katz’s cartoon that’s offensive. It’s the reality that it reveals.