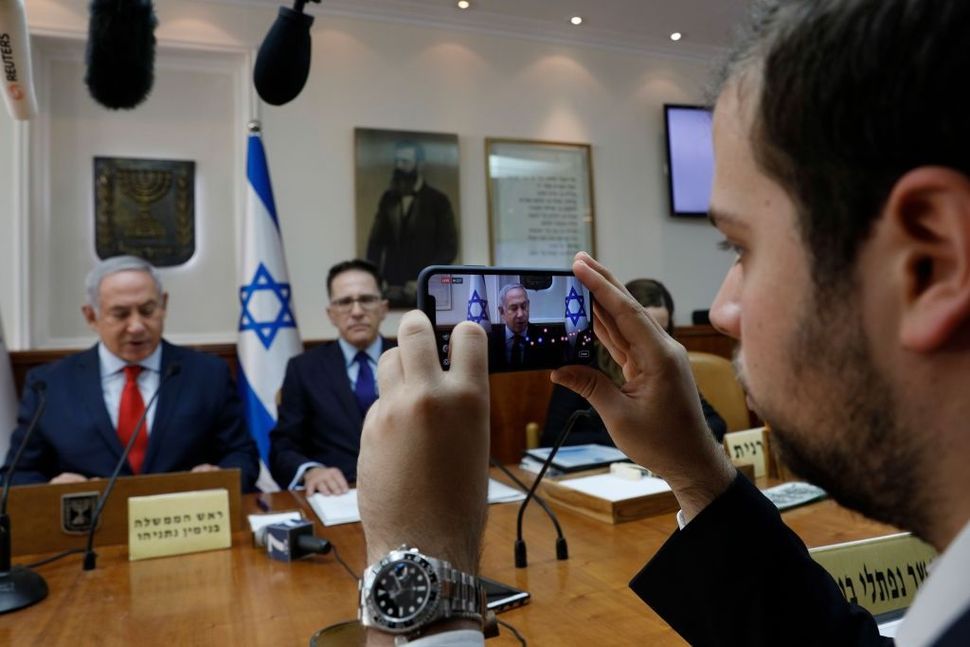 A media advisor of Israeli Prime Minister Benjamin Netanyahu makes a facebook live broadcast as he opens the weekly cabinet meeting at his Jerusalem office on January 21, 2018. Image by Getty Images 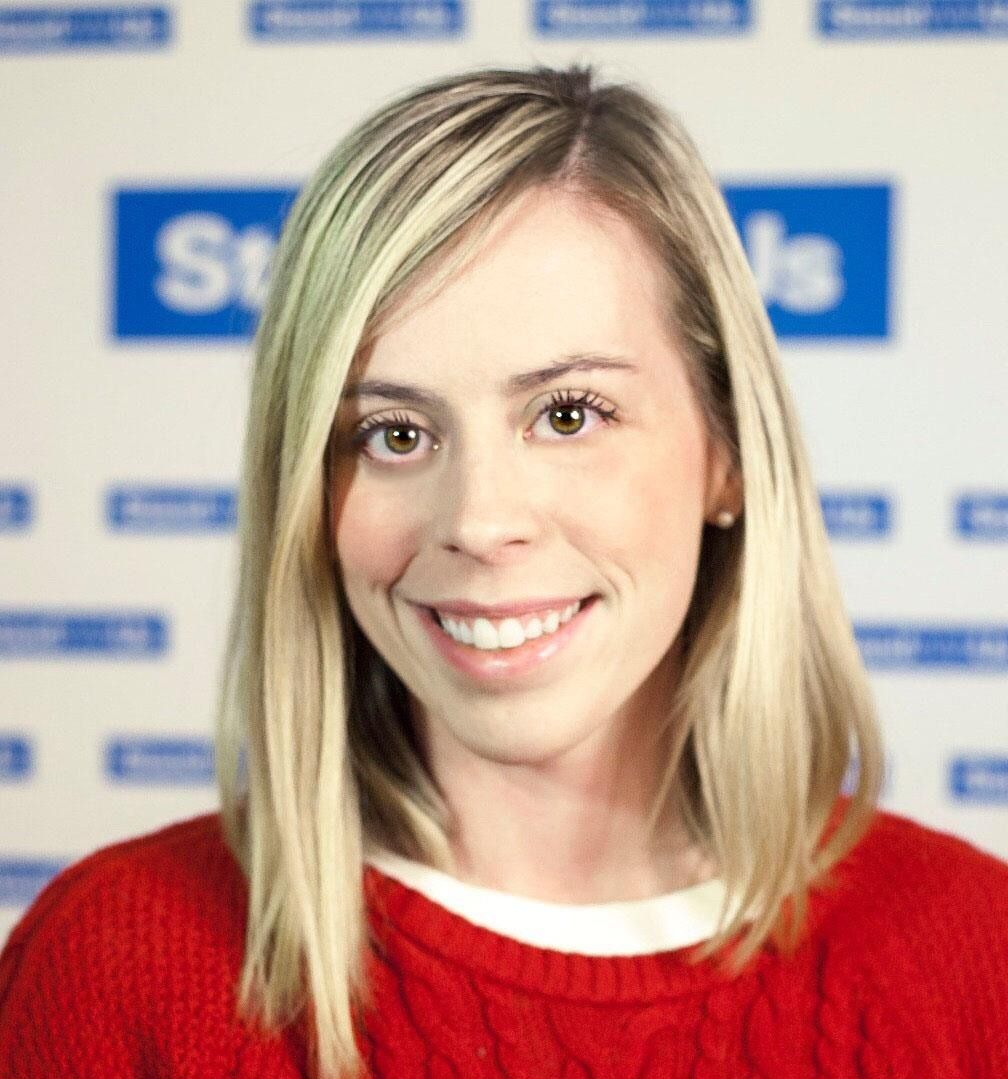 Facebook CEO and founder Mark Zuckerberg once said, “The question isn’t, What do we want to know about people?, It’s, ‘What do people want to tell about themselves?’” When it comes to the state of Israel and its representatives, there is a lot they want to tell about themselves. From PR crises like multiple wars with Gaza, waves of stabbing attacks and never-ending global political tensions, I’ve seen firsthand over the last seven years how Israel utilizes social media as a tool for combatting international media bias. Yet in Israel and in the global Jewish community, there is fierce criticism of Israel’s so-called “PR failures.” I believe this criticism is unwarranted. Having been a critical observer of both the Israeli government and the Israel Defense Forces from the perspective of an outsider, I believe the state of Israel, and more specifically the IDF, have completely changed the game when it comes to nation branding and public relations.

Despite unrelenting bias in the international media, the Israel Defense Forces has revolutionized modern warfare in the public sphere. In 2012, Israel was the first state to declare the beginning of an operation, before even holding a press conference, by launching the operation using Twitter — explaining why, how, when and where in under 140 characters. In 2014, the IDF provided data and evidence (photos and videos) within minutes of carrying out activities in order to stop the rocket-fire from Gaza. What other army in the world does this? Last I checked, the United States was not sending out photographic evidence of the terrorist weapons facilities they hit in real time on social media or on any other platform.

Since then, the IDF has only become more effective at distributing facts in real time. Whereas Palestinian terrorist organizations like Hamas have repeatedly distributed false and misleading information and even falsified photos and videos, the IDF is prompt, professional and highly effective at distributing photographic and video evidence, including detailed explanations. In the recent riots at the border of Gaza, the IDF released video footage within minutes of terrorists firing guns across the border in a riot which the Palestinians had claimed to the international press was “non-violent” (an incident that unfortunately occurred repeatedly).

That is not to say every action of the IDF is justifiable and morally correct — that would not be true of any army in the world. But there is no question that the IDF goes above and beyond to distribute factual information in a way that no other army in the world would do, could do or has to do to comply with international law. Indeed, even when mistakes are made, the IDF is clear and professional about the aftermath — investigating incidents of civilian casualties quickly and releasing the findings of the investigations to the public.

Few in the Western world are aware, but the IDF has a massive following in Arabic — and their Arabic spokesman, Avichay Adraee, is an extremely well-known public figure in the Arab world. Whether they love him or hate him, Adraee is getting the message out loudly and clearly on networks like Al Jazeera Arabic, and through his massive social media following of over one million on Facebook.

As the digital director of one of the few pro-Israel organizations that operates on social media in Arabic, I can testify to the fact that the impact of having an Israeli voice from the IDF, who is ”reachable” on Twitter and Facebook, is tremendous. What other army in the world has that advantage? The average citizens that Adraee is reaching on a day-to-day basis are being faced with the reality that what they have been taught about the alleged inhumanity of the IDF is simply not the case.

The army is not alone in their prompt and efficient PR strategy. The Ministry of Foreign Affairs as well as the Prime Minister’s Office have a different focus in terms of advocating for the state of Israel — as they should.

The Prime Minister’s Office (PMO) has also been effective in public relations — using social media as a means to cut through the international press bias that Israel often faces. Prime Minister Benjamin Netanyahu, love him or hate him, is a pioneer in digital media as a world leader, boasting millions upon millions of views across a variety of issues. The PMO also operates in Arabic, with spokesman Ofir Gendelman giving a face to the government body and having tremendous impact via social media, as well. The very fact that Netanyahu is one of the most well-known international world leaders is at least partially due to his effective use of communication channels that allow him to speak directly to millions of individuals.

When it comes to Israel’s security, all these Israeli bodies work together, as I personally witnessed in both 2012 and 2014. From the coordinated use of the #IsraelUnderFire hashtag to the dissemination of important updates translated into dozens of other languages by the Ministry of Foreign Affairs, this was an intentional and organized approach — which is precisely what an effective PR and digital strategy looks like.

Critics claim that it is a weakness that the state of Israel has no single body which addresses PR complaints. Others claim the IDF or various bodies are “unprepared” for various crises. These criticisms don’t stand up under scrutiny, however; Israel and its various government bodies, as well as the IDF, have done more to accurately and effectively communicate their position than any other nation in the world, primarily because they are forced to answer for more than any other nation.

So why the perceived “PR problem”? Despite the strength of the modern state of Israel, the narrative that sells is the “neighborhood bully,” as Bob Dylan so eloquently wrote. While the military inferiority of a terrorist group like Hamas, for example, does not equal moral superiority, it does make for a better newspaper headline, especially when there is little interest in delving into historical context or present-day realities that counter that narrative.

Israel will always face criticism because of the international obsession with the Israeli-Palestinian conflict. What greater story can there be than the return of the Jewish people to their ancestral and historic homeland, overcoming all odds and enemies on every front? On the flip side, the Palestinian narrative is also passionately compelling: people who were displaced from what became their home, too, yearning to return and facing immense hardship (whether it be from their own leadership, Israel or others). As with any other story, the media tends to sensationalize, and the Palestinian terror organizations play to that as they seek to maximize casualties of their own to further their cause; in contrast to Israel, which continues to value human life above public perception.

And so, as long as that remains the case, these challenges will continue. The state of Israel’s PR strategy should seek to grow even stronger, continuing to demonstrate transparent and direct communication using different bodies, different platforms and different perspectives. Speaking directly to people, after all, is how we change hearts and minds.

Emily Schrader made aliyah in 2015 from Los Angeles, California, and is the Director of Social Media for StandWithUs, an international Israel education organization in Jerusalem.