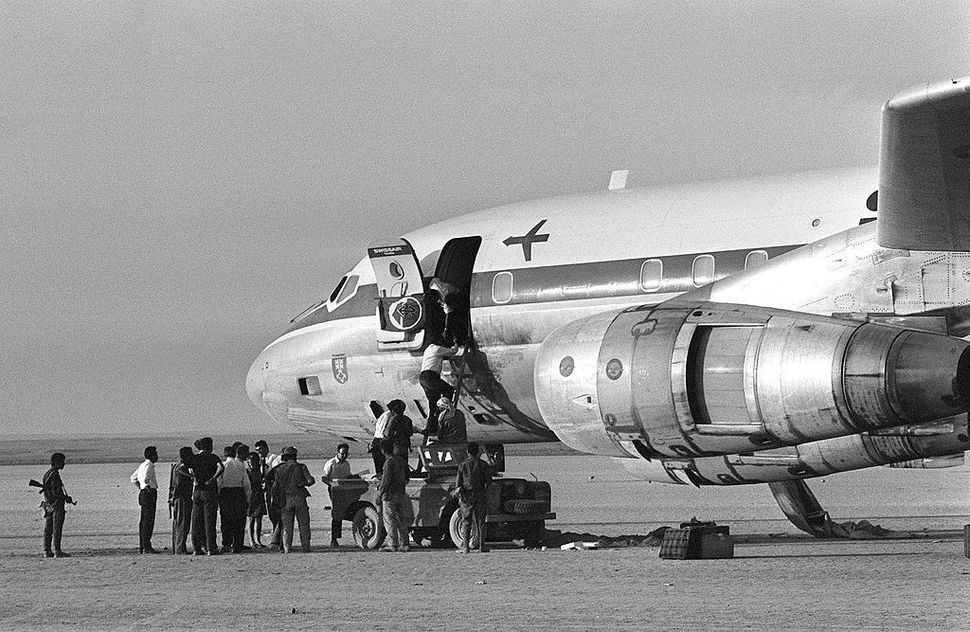 Recently, an article in The Forward that caught my attention. It was an article about Uri Bar Lev, a pilot who thwarted an attempted hijacking by Leila Khaled and Patrick Aguerllo. I was a 9-year-old passenger on that plane.

The rest of my family members and I have told our story of the attempted hijacking many times through the past 50 years. However, it only dawned on me to contact the pilot of the plane after reading the article in the Forward. The Forward made introductions, and Mr. Bar Lev agreed to join a Zoom call with me, as well as a few of the family members who had been on the flight with me: my mother Judith and sister Taal.

In the moments before the call, I felt butterflies in my stomach. After all this was the person who not only saved our lives, but hundreds of others that were on his plane.

And then, there he was on my screen: an elderly man with wild white hair and a red shirt. He was sitting in what appeared to be his study or office; his wife, Nava, was hugging him

The conversation lasted two very quick hours. I thanked him, on behalf of my family. And I told him I hadn’t known of the struggles he had endured as a result of his brave actions.

Uri explained in detail what he had trained for, what thoughts went through his mind in those critical moments, and all the conflicting messages he was getting on the radio. His description took us back to that dramatic day; we were shaking with adrenaline as we listened. The sentence that stood out to me most was that all pilots are to, “look out for the welfare of their passengers.”

Israel’s approach to hijackers at that time was to not be a “hero” and risk your passenger’s safety; instead, the recommendation was to give in to the hijackers’ demands. When the Chief Purser told Uri that there was a gentleman holding a gun to his head who wanted to access the cockpit, Uri was unsurprised; he’d known there were suspicious passengers on board and had invited the Air Marshall into the cockpit for additional protection. One crew member had passed out upon hearing that there was a hijacking and the other advised Uri to let the hijacker in so as not to risk the passengers’ safety.

Uri’s response was simple: “They will not hijack my plane.” Uri took the plane into a nosedive, causing anyone who was not strapped into their seats to lose their balance, including the hijackers; since we were still ascending, he knew that all the passengers were still strapped in.

Uri’s bravery should have put him in unique company with other Israeli heros. But Uri had broken protocol with his daring. He also refused Israeli authorities’ demands to immediately return to Israel because the Chief Purser Vider, had jumped with his bare hands at the terrorist Patrick Aguerllo, who shot him twice. He was bleeding profusely and a doctor on the plane said that he needed immediate medical attention. Uri insisted on landing the plane in Heathrow airport, 20 minutes away, rather than turn the plane around and fly five hours back to Israel, a decision which saved Mr. Vider’s life.

But upon his return to Israel, he was summoned by El Al management and the authorities. He was asked to explain his decision making and actions, and told to resign by El Al management; authorities warned that El Al would pay dearly if they refused to fire him. Even 40% of his fellow pilots demanded that he resign.

But we are lucky that Uri’s definition of watching out for “his passengers’ welfare” was not in line with the authoritiesThe results could have been much more tragic.

The demand to fire Uri was never publicized in Israel. After feeling that the country he loves so much has basically turned its collective back on him, he finally reached out to Prime Minister Golda Meir. Turns out that Uri is also quite the negotiator; Uri was flying a week after their meeting.

Uri is your typical sabra. He has a very rough exterior, but a soft heart. He never sought the limelight or to become a celebrity, only to save lives. But the way he was treated upon his return was not what he expected nor what he deserved.

He still is the only pilot, not only in Israel but across the world, to ever thwart an attempted hijacking. His place should be alongside all the other Israeli heros. The State of Israel should recognize him for his bravery and courage in the line of duty; I hope he now knows that I, at least, will consider him a hero forever.

Amit Hasak was a passenger on one of the planes in the Dawson Field Hijackings.