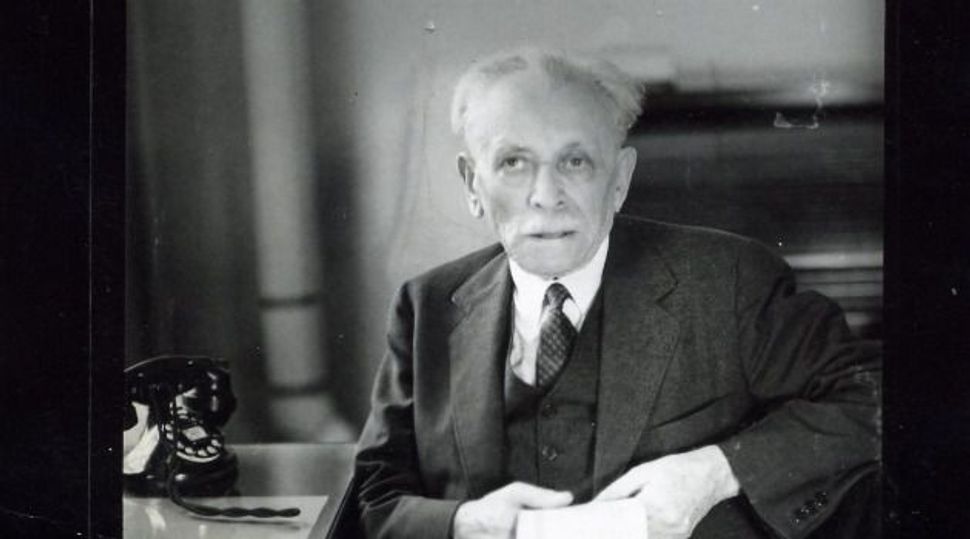 The Politics of Transformation: In his Vilna youth, Abraham Cahan had been fervently religious before discovering secular literature and radical politics. Image by Forward Association

The Rise of Abraham Cahan
By Seth Lipsky
Schocken, 240 pages, $26

On the morning of August 24, 1929, an Arab mob attacked the Jewish population of Hebron. Homes were pillaged, synagogues were desecrated, and scores of people were murdered or maimed. In the final tally, some 67 Jews were killed.

A few days later, Abraham Cahan, then at the height of his power as editor of the Yiddish-language Forverts, editorialized on the massacre. Although his words stood in contrast to those of the Communist newspaper Frayhayt, which considered the attack a revolt against British and Zionist imperialism, they expressed a nuanced point of view. The underlying cause of the massacre, he wrote, was a universal failing — a “dark chauvinism” that was at “the root of all wars, of all misfortunes.” But he also compared the tragedy to a “Third Destruction,” invoking the sacking of the temples in Jerusalem and placing the event in a history of specifically Jewish suffering. National identity could be the cause of conflict, he realized, but also its target. 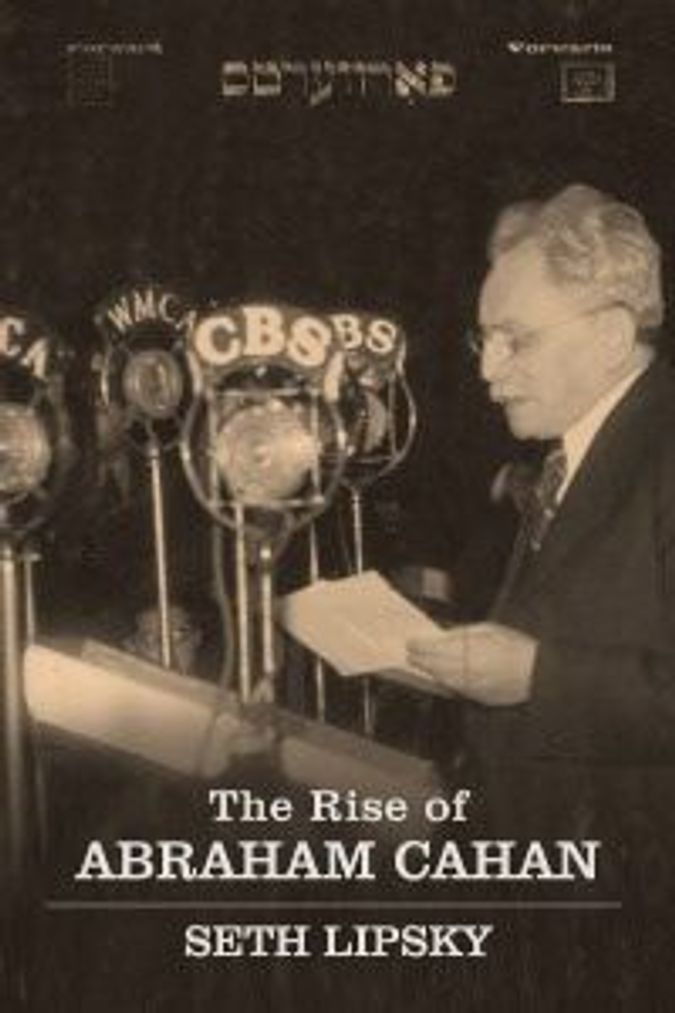 Cahan had not always been so sensitive to Jewish trauma; 48 years earlier, when pogroms broke out in Ukraine after the assassination of Czar Alexander II, he was downright indifferent. “Even though the pogrom brought dread into the heart of every Jew, I must admit that the members of my group were not disturbed by it,” he later wrote in his autobiography, “The Education of Abraham Cahan.” “We regarded ourselves as human beings, not as Jews. There was only one remedy for the world’s ills, and that was socialism.”

By 1929, Cahan had evidently rethought this position. But as Seth Lipsky details in his short and engaging new biography, “The Rise of Abraham Cahan,” the contest between universal values and Jewish interests was a struggle throughout his life. While Cahan’s early encounter with revolutionary politics impressed him with the ideal of class solidarity transcending national or ethnic divisions, later experiences put this high-mindedness to the test. Judging with the benefit of hindsight, and bringing his own neo-Conservative politics to bear, Lipsky has his own thoughts on such subjects. But he does justice to Cahan’s forcefully articulated, and frequently shifting, views. 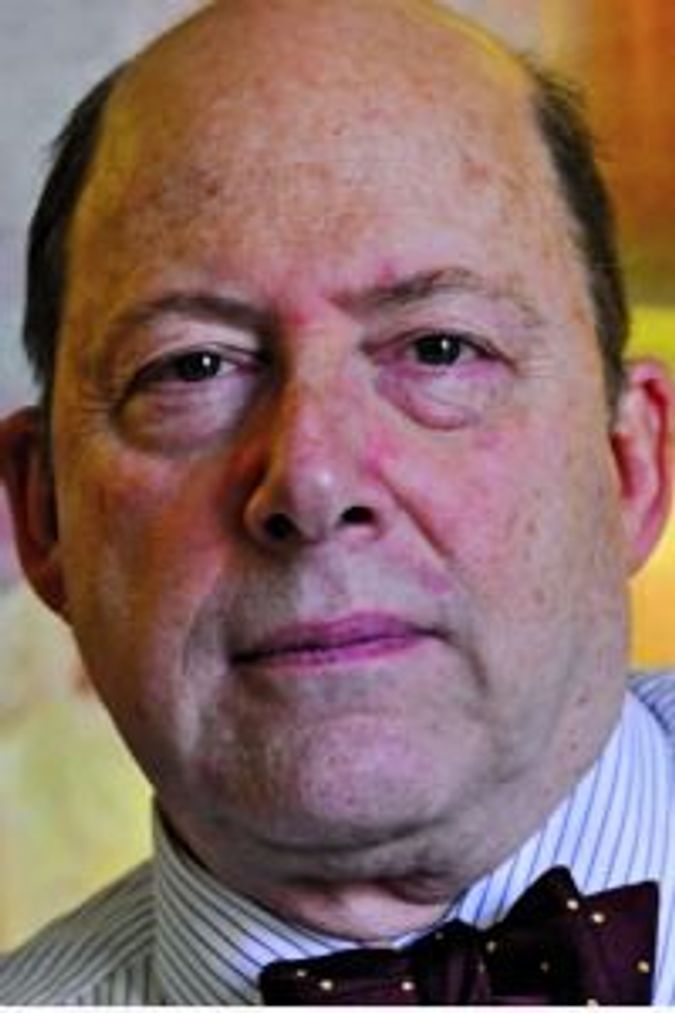 Cahan’s ideological transformations were similar to those of many Jewish socialists of his day. In his Vilna youth he had been fervently religious before discovering secular literature and radical politics. During his first years in New York City he considered himself an anarchist, but he became disillusioned with the inconsistencies of anarchism (as he saw them) and switched to democratic socialism.

He initially welcomed the 1917 Russian Revolution as the fulfillment of socialist dreams, but soon recognized the tyranny of Bolshevism and became a staunch anti-Communist, penning editorials that, as Lipsky puts it, “sounded as though they had been written by members of the John Birch Society.” And though he never really became a Zionist, he came to accept Jewish settlement in Palestine and was impressed by its achievements.

Throughout these evolutions, Cahan performed a balancing act between his belief in universal principals and his concern for Jewish well-being. In the summer of 1891, Cahan, by then a leading intellectual on Manhattan’s Lower East Side, traveled to Brussels for the Second Congress of the Second International as a representative of United Hebrew Trades, a confederation of Jewish unions.

Not content to merely observe the proceedings, he insisted on submitting a question for the agenda, asking, “What shall be the stand of the organized workers of all countries concerning the Jewish Question?” The move met unanimous opposition from both Jewish and non-Jewish delegates, who thought it inappropriate to focus on the concerns of a single national-ethnic group. But unlike his younger self, Cahan was no longer willing to throw Jewish concerns under the socialist bus. The issue at stake wasn’t whether Jews could be socialists, but whether socialists could also be Jews.

To say that such provocations made Cahan a nationalist, however, would be an exaggeration. Lipsky, more than previous biographers, focuses on Cahan’s relationship with Zionism, drawing attention to the fact that Cahan was born in the same year as Theodor Herzl and that he corresponded with such Zionist thinkers as Vladimir Jabotinsky. But like many Jewish socialists, Cahan didn’t consider Zionism a practical solution to the problems of Diaspora Jewry.

While the rejection of Zionism by such a prominent Jewish leader may strike us as radical, Cahan’s position was not unusual for its time. Indeed, his occasional sympathies for the movement — he once told the Hebrew newspaper Davar that “I do not believe in it, but there is no hatred for it in my heart” — struck some of his peers as heretical. And like countless skeptics, he wasn’t above being charmed by a free trip.

In 1925, Cahan traveled to Palestine on behalf of the Forverts, visiting holy sites and kibbutzim and meeting with leaders like David Ben-Gurion, whom he described as “a genuine labor leader and… a man of strong character.” During his visit, he marveled at the accomplishments of agricultural pioneers, telling an audience at Kibbutz Ein Harod that “you are bringing true the best of my dreams and the dreams of my friends of 40 years ago.” When he visited the Western Wall on Yom Kippur, he wept.

Yet Cahan remained convinced of Zionism’s limitations. While elsewhere he had objected to the tendency of international socialism to stifle Jewish concerns, in Palestine he saw working-class interests being sacrificed on the altar of Jewish nationalism. In the Forverts, he wrote:

When you tell a revolutionary in Palestine that you are going to write about the greed of the property owners in Tel Aviv… he finds himself in a quandary. As a socialist he has to insist that you do write about these matters, but as a Zionist he is afraid that to do so may harm the endeavor in Palestine…. In the end, he is first of all a Zionist, and all the other “ims” only come afterwards.

Lipsky considers Cahan’s skepticism a failure of historical foresight, and given the ultimate successes of Zionism, that might seem reasonable. (Cahan also tended to downplay the conflict between Palestine’s Arab and Jewish populations, arguing that economic development would eventually smooth everything out.) But Cahan was more perceptive than Lipsky gives him credit for. He understood that Zionism might fix some problems — and significant ones — but that it wouldn’t resolve the socioeconomic issues facing his Diaspora readers. In the words of B. Charney Vladeck, then general manager of the Forverts, Cahan opposed a philosophy of “Palestine alone” in favor of “Palestine also.” Nearly 90 years later, the reality for most Diaspora Jews, even the most Zionist among them, is indeed “Israel also.”

Today, Cahan’s views on Zionism can still provoke debate. But other issues that occupied him ­— like the clashes between leftist universalism and Jewish particularism — seem less pressing. With the rise of multiculturalism and identity politics, ethnic and cultural identities no longer need to be checked at the meeting hall door. And whereas in Cahan’s day, socialist causes and Jewish needs were overlapping (the struggle of most immigrant workers was simply to defend themselves in the battle for economic survival) the concept of a shared Jewish politics has now largely evaporated. The question is no longer whether socialists can also be Jews, but whether Jews have any reason to be socialists.

For his part, Cahan never argued that socialism was inherently Jewish, even though he was inclined to write about it in Jewish terms. (One of his early newspaper personae was the “Proletarian Preacher,” in which he adopted the voice of a traditional magid, or preacher, for rhetorical effect.) If anything, he adhered to socialism despite its antipathy to Jewishness because he believed it to be right, and because it served Jewish interests. Still, it was at one time a binding element of Jewish experience, supplanting, as historian Tony Michels has pointed out, traditional Judaism itself. Given socialism’s onetime strength, perhaps it didn’t seem necessary to think about a Jewish identity that could take its place.

Here a critique of Cahan’s ambivalence toward Zionism, along with other articulations of Jewish nationhood, is justified. As the editor of the largest and most successful Yiddish newspaper in history, the kind of questions that bother us today — Can there be a substantive Jewish connection without invoking Israel or the Holocaust? Is Jewish identity based solely on religion or history? Can we make something Jewish by calling it tikkun olam? — may have seemed irrelevant to him. He was of a generation that could take Jewish belonging for granted. Yet other thinkers did address such issues. These included Zionists, who ultimately succeeded in creating a national Jewish framework that could encompass a range of political and social values, as well as thinkers like Chaim Zhitlowsky, who formulated a template for Jewish life based on a secular, diasporic, Yiddish-speaking identity.

But if Cahan didn’t tackle the problem in theory, with the Forverts he solved it in practice, at least for a time. Granted, he had the advantage of writing for an audience with a shared cultural background and, of course, he wrote in Yiddish. But his newspaper was remarkably broad, taking in high literature alongside pulp romance, and steel-toothed polemic together with rank sensationalism. (Consider a headline like, “Pittsburgh Millionaire, Bachelor, Gets 2 Wives After Death.”) And then there was the famed Bintel Brief advice column, which forged an intimacy between writer and reader that few journalists are ever privileged to know.

All this made the Forverts wildly successful and earned Cahan, as Lipsky argues, “a place in the pantheon of America’s greatest newspaper editors.” Most of all, Cahan’s inclusive spirit demonstrated a radical confidence in his own cultural position. After all, identity is largely about self-perception, and Cahan (youthful enthusiasms aside), never failed to perceive his activities as Jewish, whether he was giving socialist speeches, traveling to Palestine or writing about the problems of immigrants. As a writer, editor and journalist, the Jewish angle started with his byline.