Behind the Small Screen at Jon Stewart’s Gig 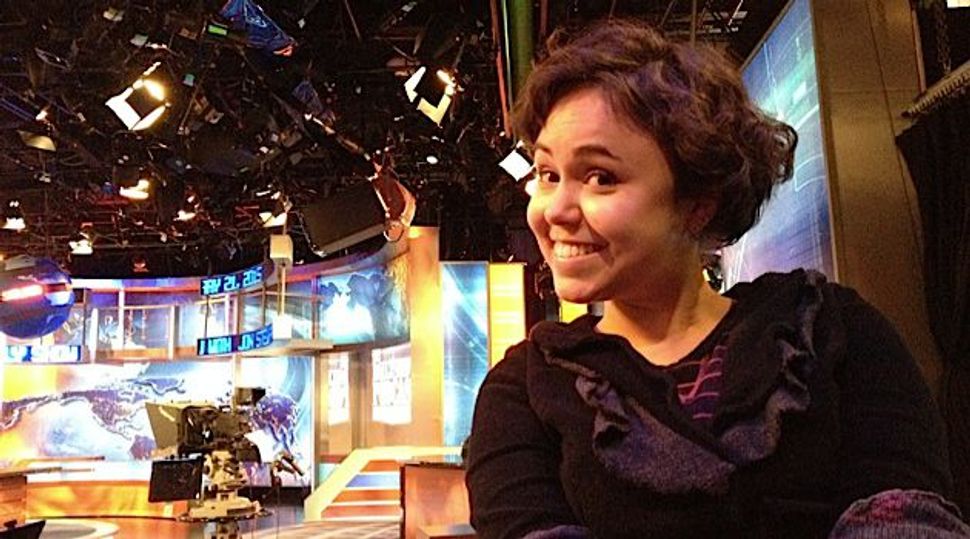 Serious Workout: The author at the live-to-tape production of the Daily Show with Jon Stewart on January 21, 2015. Image by Anna Goldenberg

Forget bagels, Katz’s Deli and Crown Heights — New York City doesn’t get any Jewy-er than at the Daily Show: The taping of the fake news comedy show from Comedy Central has a) Jon Stewart, b) free tickets and c) did I mention Jon Stewart?

Located in a nondescript building on 11th Avenue near West 52nd Street, the show is produced Mondays through Thursdays at 6pm with a live audience in the studio. Laughing and clapping when prompted in exchange for being in the same room as Stewart as well as countless selfie opportunities seemed like a good deal for me, so when new slots opened up online at the beginning of the year, I signed up for studio tickets for Wednesday, January 21, 2015.

Having distributed multiple print-outs of my ticket between my bag, my desk at home, and my desk at the Forward’s office (just in case of… I’m actually not quite sure), I ventured to Manhattan’s west side on a chilly day. Here’s what happened.

12:15 On my walk to 11th Avenue, I find myself anxiously looking for signs. Which of the people on the streets of Hell’s Kitchen might also be heading to the taping of the Daily Show, thus jeopardizing my chance for a free ticket? Perhaps the blond woman with the blue gloves (clearly the same blue as the logo of Jon Stewart’s comedy show)?

12:18 And how about the group of youngsters bundled up with hats and gloves, clutching Starbucks cups — probably to brace themselves for the hour-long wait for free tickets?

12:25 I try to fight my anxiety by reminding myself of the instructions on the homepage. Yes, they read that the taping of the show is overbooked, and that even those lucky enough to have signed up for free tickets online aren’t guaranteed entry. But it also says that guests are advised to line up well in advance to 2:30, when tickets are issued on a first-come, first-serve basis. Breathe, Anna, breathe.

12:27 Where’s the middle-aged man with his dog going? Are pets allowed in the studio?

12:27 I start to find myself as obnoxious as those visitors to my native Austria who are on the constant hunt for Nazi references (like “wow, they’re using the word Anschluss in train announcements!”).

12:30 I arrive at the windowless, concrete building that is home to the fake news show — recognizable through large banners with photos of Jon Stewart and his “correspondents” Samantha Bee, Jordan Klepper, Jason Jones. Aasif Mandvi and Jessica Williams. My own relief about the complete absence of a crowd is topped by a twenty-something couple, who is overjoyed about the fact that we seem to be first in line — if we’re at the right place.

12:32 We google the Daily Show, and compare images of the ticket line with our location. Yep, we’re at the right place.

12:47 Only one hour and forty-three minutes to go.

12:48 One hour and forty-two minutes. Almost there, in other words.

13:01 I take a selfie with the ticket and send it to our family Whatsapp group. “Who is Jon Stewart?” my grandmother responds.

13:20 Cold and hungry after an exhausting half-hour wait, I stumble into the tiny Azuri Café, a falafel shop owned by Jerusalem-born Ezra Cohen.

15:00 Cohen, who has run the place for 25 years, tells me that Stewart comes by every now and then.

16:30 I arrive back at the Daily Show building, ready to line up by ticket number. If you’d put the crowd that goes through the security screening with me into a time machine, you’d probably get the audience of “The Death of Klinghoffer” at the Met.

17:45 An announcer asks for “100% participation” and advises us to store our bags under our seats. I’m told to remove my notebook from my lap. What exactly are we expected to do? Then we’re told to laugh “outside our heads.” This is beginning to sound exhausting.

18:05 I used to find what various sports coaches termed “warm-up” exhausting enough to count as legitimate exercise. Same holds true for Paul Mecurio, the warm-up comic at the Daily Show. My abs hurt a bit from laughing. I make a mental note to award myself with some extra chocolate to compensate for this strenuous task.

18:15 Stewart appears. Hiii Jon. Can we hang out soon? I’m Jewish, so we’re bound to be BFFs, right? We wouldn’t have to talk about “Rosewater,” would we?

18:17 Stewart takes questions from the audience. Someone wants to know what his spiritual animal might be. “I don’t know, but it’s likely old and Jewish,” he replies.

18:25 Can you determine the seniority of the security guards by their reaction to the show’s jokes? One of them seems to struggle, as he tries not to laugh.

18:30 The crowd is clearly more enthusiastic than at “The Death of Klinghoffer.” Might be because Stewart is poking fun at the Republican and Tea Party responses to Obama’s State of the Union address, and not singing about terrorism on a cruise ship.

18:40 Anne Hathaway has come to talk about her new movie. She’s wearing sneakers that match the white t-shirt of her suit. I should try that. Wearing sporty shoes surely counts as exercise, right?

18:50 Stewart hopes we found the free tickets well worth it, and come again.

Anna Goldenberg is the Forward’s arts and culture fellow and edits the Fast page. Follow her on Twitter @angoldna.

Behind the Small Screen at Jon Stewart’s Gig