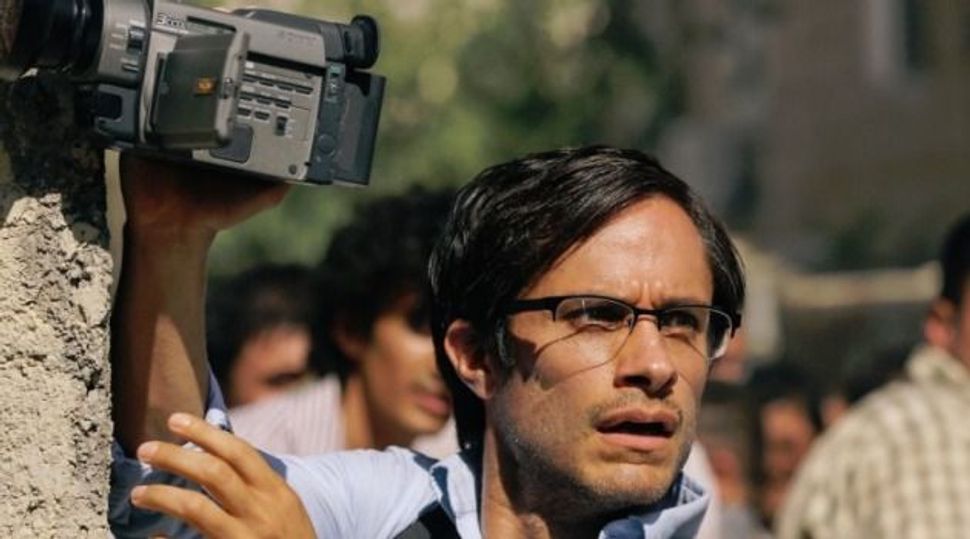 “Listen, Jews do a lot of things out of guilt. Generally it has to do with visiting people, not making movies.” That was everyone’s favorite Jon Stewart (née Jonathan Stuart Leibovitz) talking to New York Magazine last month.

Stewart, 51, writer, producer and award-winning host of the satirical “The Daily Show” was referring to his latest project, which is also his first excursion into filmmaking: The full-length feature film “Rosewater” opens in cinemas nationwide on Friday. It’s based on the autobiography of Iranian-born, London-based journalist Maziar Bahari, who went to Iran to cover the Iranian presidential elections and the protests that followed. Voters believed that Mahmoud Ahmadinejad’s victory against the moderate Mir-Hossein Moussavi was due to election fraud in 2009.

Shortly after being interviewed by “Daily Show” correspondent Jason Jones in Tehran, a scene that is reenacted in the film, Bahari is arrested, and spends 118 days in Evin prison, accused of being a spy for America. Bahari is tortured and interrogated by a so-called “specialist” whose perfume preferences are reflected in the title of the film.

No question, “Rosewater” is a solid movie. There is some fine acting, with Gael Garcia Bernal as Bahari, and Kim Bodnia as Rosewater. There are enough light-hearted moments, sophisticated editing and strong imagery to make the 103 minutes go by fairly fast. And the narrative has just the right amount of sadness and despair to make it feel serious, but not overly sentimental.

While seeing the movie, I barely thought about the fact that Bernal is actually Mexican. Or that Bodnia is Danish. Or that the film was shot in Jordan, and not Iran. I even occasionally forgot to notice that the actors were talking in Middle-Eastern-accented English, and not Farsi, or that Bahari’s beard doesn’t grow throughout his four-month-imprisonment. Heck, for a few moments I even stopped wishing that a person seated close to me in the cinema would enjoy using rosewater, or taking showers in general.

My problem with the movie was a small, but prominent one: I kept searching for signs of the Jon Stewart I knew from the “Daily Show” and his other comedic, public appearances. Was there really no sign of him trying to make up for the guilt he might feel that the “Daily Show” interview was used as evidence against Bahari during the interrogations? (Bahari was among hundreds of protestors and journalists arrested during the protests. In an interview with the New York Times he said it was highly unlikely that the clip played a significant role since he was already being monitored by the Iranian government.)

When the Specialist asks Bahari what business he had in New Jersey, and Bahari tells him about sex massages he allegedly had there, I couldn’t help but wonder if the conversation about the state in which Stewart grew up really played out that way. (Yes, according to Stewart in a Daily Beast interview, because New Jersey plays an important role in the imagination of Iranians, as many of those working with the diplomatic or security apparatus live there) And is Stewart representing journalism, a profession he often, and aptly, criticizes in his satirical show, accurately and fairly? (I think so. Bahari comes across as sensible and ambitious, yet not reckless; he doesn’t seek to put himself — or others — in danger, and concedes to the Iranian government’s demands as he sees his own life at risk.)

Stewart’s personal touch as a director is light, but you can find it if you really look for it. Most importantly, perhaps, I exited the cinema with the same feeling I often have after watching Stewart on the “Daily Show:” “Rosewater” is the kind of movie that leaves you with the resolution to read more news analyses and fewer “Five Ways To Cut Down on Carbs Without Craving”-lists (“take time to evaluate your appetite”), do a Google search on the Shah and the Iranian Revolution (and end up skimming the Wikipedia entry), and wonder what happened to those Al Jazeera journalists in Egypt (still in prison). But it never takes long until daily life takes over again.