NSFW: The True Story of Shitgibbon: 2017’s Most Memorable Insult 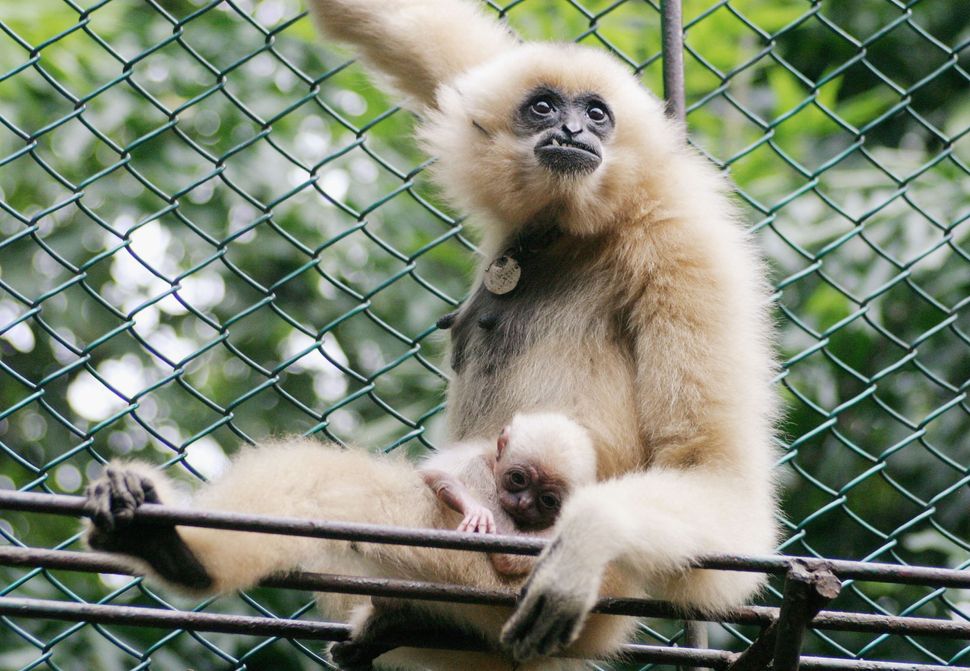 A gibbon Image by Getty Images

After all the blood-pressure-raising press featuring Donald Trump’s insults, ranging from “nasty woman” to “bad hombres,” Pennsylvania state senator Daylin Leach turned the tables and made news by calling the President “shitgibbon.”

More specifically, in the spirit of the Jewish principle that hamevi davar b’shem omro mevi geulah la’olam — meaning, he who gives credit to someone who said something brings salvation to the world — Leach, who describes himself on Twitter as “Father, husband, progressive, and Pennsylvania Senator. Like Gandhi, only less” wrote this, to be exact:

Hey @realDonaldTrump I oppose civil asset forfeiture too! Why don’t you try to destroy my career you fascist, loofa-faced, shit-gibbon!

Whew. That’s quotable, and certainly re-tweetable. (15,000 retweets so far.) All over the world, in several time zones, linguists and garden-variety journalists raced to answer some essential questions while rapidly looking up dictionary definitions of “gibbon.”

Gibbon, for the uninitiated, means “a small, slender tree-dwelling ape with long powerful arms and loud hooting calls, native to the forests of Southeast Asia,” according to the Oxford Living Dictionary. Sounds good, though small and slender may not perfectly describe the current President.

For those wondering, the word’s origins are “late 18th century: from French, from an Indian dialect word,” the Oxford writes.

Now to the essential questions. First, who on earth came up with that glorious word “shitgibbon?

Ben Zimmer, The Wall Street Journal’s language columnist, wrote a tantalizing post on “Strong Language” — a blog devoted to swearing — about the origins of “shitgibbon.” Zimmer found references in 2000 on music-related Usenet groups, such as these vintage gems:

EvilJam32, 21 Mar 2000, alt.music.tragically-hip Good luck and goodbye to the most sick-making, hypocritical bunch of shitgibbons i’ve yet encountered on the Web!

Master8 uk, 28 Nov 2000, alt.music.morrissey get the f*ck off this newsgroup, shitgibbon!!

Chris Adams, 26 Sep 2001, alt.music.bootlegs If you want cheap then feel free to buy from any one of 10,000 shitgibbons out there…

Wait, it gets better. Zimmer also found a reference in the HBO show “Veep.” He reports that “Veep” creator Armando Iannucci discussed the term “shitgibbon” in a 2013 interview with Time Out London. Specifically, the “gold-plated f—king shitgibbon” line comes from “Frozen Yoghurt,” the second episode of the first season of “Veep.” Here’s the interview clip Zimmer dug up:

Working in America doesn’t seem to have affected your love of swearing: I saw one episode of ‘Veep’ where someone was referred to as ‘a gold-plated f—king shitgibbon’.

‘It’s funny, because I’m not really a swearer myself. It started with trying to get the political scene accurate in “The Thick of It”: they swear a lot in Downing Street so you’ve got to put swearing in, but you need to be creative or it gets boring.’

But of course, since this involves language nerd-dom, that wasn’t the end of the story. A British music writer used the comment section on Zimmer’s post on Strong Language to claim that he was, indeed, the originator of the term in the 1980s. The comment read:

Hi, I wrote the ‘Veep’ line. It was originally “spunk-faced shitgibbon”, a phrase I used in a 1988 column in New Musical Express and have put in most of my writing since. PS I’m not Scottish and have nothing to do with bootlegging. all the best David Quantick.

To his great credit, Zimmer investigated Quantick’s claim, confirmed it, and wrote it up for Slate’s Browbeat blog. It wasn’t that easy to prove, since there is no digital record of New Musical Express.

The difficulty of the quest only made language nerds breathe harder.

Fortunately for those obsessed with this stuff, a Norwegian programmer scanned some issues from the 1990s and so the claim was proved correct. The conclusive proof was a screenshot of the January 13, 1990 issue of New Musical Express, in which David Quantick and Steven Wells imagine the year 2000:

Tis the Mozzer and Mark E Smith! Yes, in the year 2000, Sir Morrissey del Manc and Shitgibbon Smith will be tired old buckers, fit for the scrapheap ever since some student NME reader got to see their poetry part of the English GCSE and finished so-called “serious rock” for, in the words of Alice Cooper, “EVAH!”

You would think that would be the end of it, but linguists were still intrigued. (Let no one say language folks aren’t obsessive.) They wanted to know how to make this kind of memorable descriptive expletive at home. And frankly, don’t we all?

[Senator Leach did seem to be enjoying himself while tweeting “shitgibbon,” and he has certainly been basking in the publicity glow. Many of us, even if we aren’t senators or linguists, can use a little bit of fun right now, and why not turn to insult-making as stress relief? ]

Fortunately, help is out there.

“I argue that the rule for making a novel insult of this type is a single syllable expletive” such as “douche” plus a trochee,” wrote Taylor Jones, a PhD candidate at The University of Pennsylvania in linguistics and the author of LanguageJones, a blog devoted to this sort of thing.

“A trochée, as a reminder, is a word that’s two syllables with stress on the first. Examples are puffin, womble, trumpet, biscuit, waffle, weasel, and of course, gibbon,” Jones continued.

For those who haven’t thought about trochees in decades, “Sound and Sense: An Introduction to Poetry” by Laurence Perrine and Thomas Arp, is a classic intro-to-poetry text that is pretty easy to find.

“Tons of words in English are trochees,” Jones wrote, helping readers without a handy copy of Sound and Sense out. “Because so many words are trochees, you’ll have to pick wisely — something like ninja might not be as humorously insulting as waffle.”

Jones then points out that the monosyllable is not just powerful in poetry, but in curses. I had a brief flashback to Derek Walcott explaining that what Robert Frost understood deeply was the effect of the monosyllabic poetic line in English.

“In principle, monosyllable expletive + trochee seems to give really good results,” Jones wrote offering “douche blanket” and “piss gopher” as proof. Other examples Jones offered are not printable in The Forward, a family newspaper, but this columnist assures you that they are delicious.

“So, it’s not the fact of being a gibbon per se,” Jones explains. “Various other monkeys would work: vervet, mandrill, etc. However, crucially, baboons, macaques, black howlers, and pygmy marmosets are out.”

For many language lovers, the monkey discussion alone was worth staying up late for — though these days, many people are going sleepless anyway. Jones, a former jazz musician, has given us all a gift by showing us how to improvise an insult at a time when the world itself seems like an improvisation.

NSFW: The True Story of Shitgibbon: 2017’s Most Memorable Insult