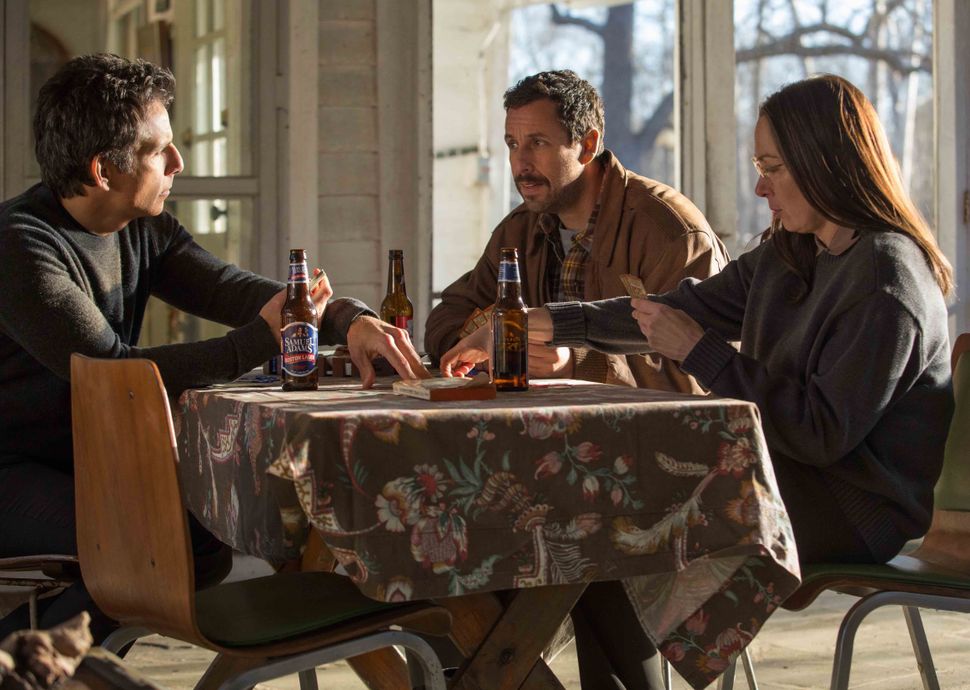 Regardless of where one is in life or how degrading one’s surroundings may become, family has the ability to dig into us in a special way that nothing else can. Noah Baumbach appears to have internalized this lesson, a sense of how those closest to us can make us more miserable than even the cold and uncaring world, to a rather uncomfortable degree. His new film, “The Meyerowitz Stories (New and Selected),” which made its North American debut at the New York Film Festival this Sunday and will become available on Netflix on October 17, is driven by familial maladjustment as if by a splinter under the skin. One son, Matt (Ben Stiller), calmly tells a friend that he’s learned to cope with his father, but by the end he’s screaming after his dad’s departed car, “I beat you! I beat you!”

“The Meyerowitz Stories” finds Baumbach returning to the territory of his 2006 breakthrough, “The Squid and the Whale,” a warped coming-of-age tale that similarly depicted a pair of brothers squirming under the oppressive weight of their narcissistic artist father. “The Meyerowitz Stories” sets two emotionally troubled half-brothers (Stiller and Adam Sandler) against their artist dad, this time a sculptor portrayed by Dustin Hoffman. As in that film, the cultural quirks of upscale, largely Jewish New Yorkers are anatomically dissected. One of Hoffman’s first acts onscreen is to ask, “Where’s the gourmet hummus?”

In keeping with the literary aspirations of its ungainly title, “The Meyerowitz Stories (New and Selected)” is split into five rough chapters of uneven scale, each focusing on a new arrangement of characters, though it still retains something not unlike a traditional three-act structure. The real literary thrust of the film emerges from Baumbach’s dialogue, which provides a seemingly bottomless font of enraged zingers, his eloquent wit acting as the spoonful of sugar to take the edge off the copious servings of verbal bile.

“The Squid and the Whale” was to some extent rooted in the divorce of Baumbach’s own parents, and it utilized a fly-on-the-wall aesthetic that both implied a certain rough actuality and heightened the film’s hothouse emotional atmosphere. “The Meyerowitz Stories,” in contrast, foregrounds its high-wire writing and orchestration in a manner not unlike the 1930s screwball comedies, including as “The Awful Truth” (1937), that Hoffman’s character watches on TCM. In this way, it also recalls another New York-set familial tragicomedy, “The Royal Tenenbaums” (2002), directed by Baumbach’s sometimes collaborator Wes Anderson (who produced “The Squid and the Whale”).

As in that movie, character is expressed firstly through costume, though the character’s looks are more rooted in their milieu. Sandler’s Danny, a divorced househusband who abandoned his musical aspirations, is almost impossibly schlubby. His awkward moustache proves a perfect match for the button down shirt tucked into his cargo shorts, and the resulting look leaves no question as to his sadsack credentials. Matt, in contrast, wears a crisp blue suit that’s every bit a uniform as the tracksuits Stiller donned in “The Royal Tenenbaums,” in which he embodied a similarly neurotic overachiever. Danny’s sister Jean (Ann Marvel) wears owlish glasses and an overlarge coat. Baumbach uses her character primarily as a foil to the boys, leaving Marvel to steal scenes from the sidelines.

Befitted with a regal white beard and visible paunch, their passive-aggressive paterfamilias Harold is a remarkable comic invention. A highbrow sculptor who appears to have peaked in the heady 1960s, Harold has seen himself relegated to footnote status and gives voice to his thundering resentment from behind a veneer of Jupiterian artspeak. Portrayed by Hoffman with hazardous vulnerability, he’s wounded pussycat playing at Lion in Winter. Harold is given to repeating himself, his utterances coming off as more pathetic with each successive utterance; but he still has some bite left in him yet, referring to his sporadically lashings out as his “protest.” At one point, he literally flees an exhibition opening at MoMA, leading Sandler on an excruciatingly medium-speed pursuit through midtown.

After dominating the first two sections, Harold’s suffocating presence is reduced after he takes suddenly ill midway through the film. Absent their father’s interference and faced with the potential end of an era, his children take tentative steps beyond their suspended adolescence, coming together to grapple with their own places in the world. Baumbach uses their time together to explore the fear of failure, the ways that individuals, families, and groups define it for themselves, and the near-bottomless shame that it can beget. Sandler delivers an intelligent and pathos-laced turn as Danny, who alternates between tenderness and ineffectual fury as he looks after both his loving daughter, Eliza (Grace Van Patten), and disdainful father with a pronouncedly reluctant selflessness. He sees himself as a disappointment for having abandoned his higher aspirations, though he attains a sort of basic decency that his illustrious father was apparently never able to muster. The kids also struggle with Harold’s legacy. “If he wasn’t a great artist,” Matt admits, “that means he was just a prick.”

Despite the surfeit of bad times, Baumbach leaves a sense that at least some measure of growth and even acceptance might still be possible. Things appear to be going better for the next generation, represented by Eliza, who goes off to Bard to make softcore experimental shorts pitched somewhere between Ryan Trecartin and the Kuchar brothers (I’m not sure what Baumbach was going for with these, but points to him for trying). In any case, it’s nice to know the family Meyerowitz may not be permanently blighted.

Daniel Witkin is the Forward’s Arts and Culture Intern. Reach him at [email protected] or on Twitter, @dzwitkin