How I Learned To Speak Yiddish And Love The Forverts 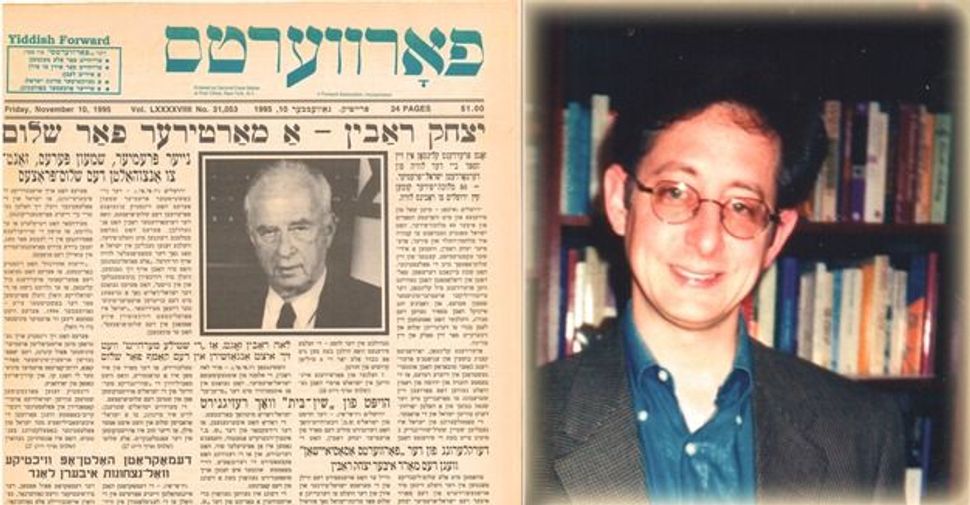 Just a few months after I began studying Yiddish, I bought my first copy of the Forverts at a newsstand in midtown Manhattan.

The headline on the first page announced in bold, tabloid-size lettering that the Israeli Prime Minister Yitzhak Rabin had been murdered. I didn’t yet understand the complicated but essentially positive relationship that the Forverts had with Zionism, and was surprised that a “socialist” newspaper would write with touching solidarity about the assassinated prime minister.

I brought my copy of the paper to the post office and began reading it as I waited in the long line. A woman came up to me to express her surprise that the Forverts was still publishing, and comment on how unusual it was that someone under the age of 30 would read it.

The woman was about 10 years older than me, and, was, as she explained, a child of Holocaust survivors. She spoke Yiddish better than I did, although at the time this was no great achievement. She asked me about my interest in Yiddish; expressed her regret that she had no opportunities to use the language; then asked me what use there was in trying to “revive” a language that so few people still spoke. It seemed strange to me, and even sad, that there I was, a student of Yiddish, speaking Yiddish with her, yet she complained that she had no one with whom to speak it!

Over the next eight years I would often buy the Forverts and, whenever possible, the Hasidic newspapers to be found at kiosks around the city. But I never again had a chance encounter with a stranger over it, outside academic or Yiddishist circles.

That episode at the post office was once a common event. People like me, alone in the big city, could create a connection with other Jews through the language they shared, the topics they found important and the newspapers they read. I arrived on the Yiddish scene too late to spy Isaac Bashevis Singer at the Garden Cafeteria; too late to break off relationships with other Jews over the politics of the Soviet Union or the State of Israel; too late to conduct debates over the question of whether Ab Cahan, the dictatorial publisher of the Forverts for its first 50 years, was a savior of socialism or its murderer. (I can provide evidence, however, that the Forverts’s current editor, Rukhl Schaechter, is a much nicer person than Cahan ever was.)

When I began reading the paper, my grandmother, of blessed memory, told me that after her father-in-law — my great-grandfather — immigrated from Narewka, Poland to central Louisiana, he read a Yiddish newspaper every day for more than 40 years. (I was born in the same area more than 30 years after his death.) Why did my great-grandfather want to read a Yiddish newspaper long after he became fluent in written English? He was seeking a connection with Jews around the world, just as I would seek a connection with Jews across generations.

If I’m writing now with a certain nostalgia about the connections that used to be made through the print Forverts – and even with nostalgia for my past nostalgia – I’m not fatalistic about the future of the paper. We may feel sad that we no longer have a print edition to create a feeling of community, but let’s keep in mind that 100 years ago, in the pages of the Forverts, people bemoaned the fact that they longer heard the latest news while sitting with neighbors or in a house of study. The fact that we now receive news through the internet, rather than a print newspaper, is merely a change in technology, not a transformation in what we read or why.

The articles I’ve written for the Forverts over the past few years have nearly always been obituary notices, including for Philip Roth, Claude Lanzmann and Amos Oz, may they rest in peace. Now that I’m reflecting on the Forverts itself, I’m happy that this time there’s no need to end my article with “may their memory be a blessing,” but rather by wishing the Forward, in English as well as Yiddish, another 120 years — and then some.

How I Learned To Speak Yiddish And Love The Forverts