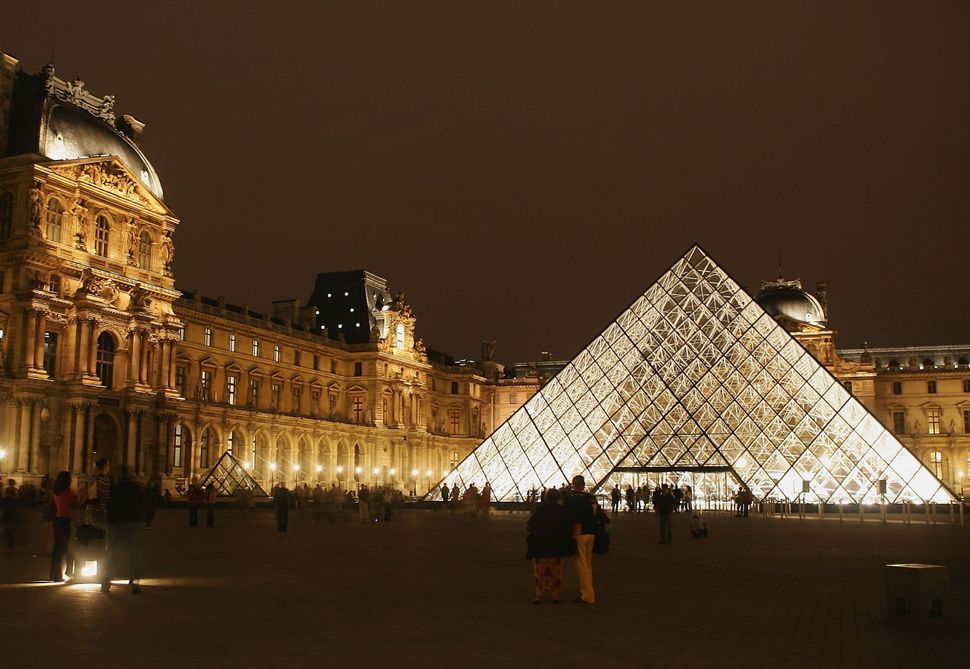 The Louvre at night Image by Getty/Pascal Le Segretain / Staff

The Louvre Museum in Paris took a bold step in an ongoing art world controversy by removing the name of the Sackler family from a gallery that members of the family, the majority owners of Purdue Pharma, helped to fund. The Louvre is the first major museum to make such a move.

The Sacklers have been involved with the Louvre for over two decades, having had a namesake wing housing part of the museum’s collection of Persian and Levantine artifacts since 1997. As The New York Times reports, within the last week the museum removed an entrance plaque bearing the family’s name from the Sackler Wing of Oriental Antiquities and covered other signs in the museum mentioning the Sackler name with gray tape. A guard at the museum told The Times that the plaque was removed on July 8 or 9, at a time when visitors were not permitted in the gallery.

A number of ongoing federal lawsuits name members of the Sackler family for misleading marketing of the drug OxyContin, an opioid produced by Purdue. In a court filing from the Commonwealth of Massachusetts released in January, for instance, Richard Sackler is shown, through emails, to have attempted to pin blame for the opioid crisis on addicts. Richard Sackler is also alleged to have encouraged Purdue’s representatives to push doctors to prescribe patients the maximum dose of the painkiller.

Several prominent museums, facing pressure for their ties to the Sacklers, have reconsidered their relationship with them as donors. The Sacklers continue to deny any wrongdoing.

Museums in Europe were the first to distance themselves from the family’s philanthropic efforts. On March 19, Britain’s National Portrait Gallery announced its joint decision with the Sacklers to not implement a $1.3 million grant from the family. Two days later, the Tate Galleries in London said they would no longer accept gifts from the family; the next day, the Solomon R. Guggenheim Museum in New York followed suit, becoming the first major U.S. museum to reject gifts from the Sacklers. These developments led two Sackler family foundations based in Britain to suspend their philanthropic giving. This May, in a move that shocked many, the Metropolitan Museum of Art, whose Sackler Wing houses the iconic Egyptian Temple of Dendur, also announced its plans to refuse gifts from the family.

What led the Louvre to make such a dramatic move, which also involved removing references to the Sackler Wing from its website?

Photographer and activist Nan Goldin, whose anti-opioid group P.A.I.N. Sackler has staged a number of “die-ins” at museums bankrolled by the family, believes her collective’s demonstration at the Louvre on July 1, during which the group displayed a banner reading “Take down the Sackler name,” prompted the decision.

“I think it happened due to our protests,” Goldin told The Times. “It shows direct action works.”

The museum’s president, Jean-Luc Martinez, told the French radio station RTL that the Sacklers’s name no longer appeared at the Louvre due to a 20-year limit on naming rights for donors, The Times reported. (The Sacklers have had their name on the wing for longer than the stated policy would appear to allow.)

Goldin told The Times that removing the Sackler name from museums was “the next step” for institutions looking to make a clean break from the family.

In May, Massachusetts Senator Elizabeth Warren, a Democratic presidential candidate and former professor at Harvard University, endorsed a similar plan, saying she supported removing the Sackler name from the university’s campus, including from the Arthur M. Sackler Museum. The comments came in the wake of Warren’s sweeping plan to confront the opioid epidemic.

Warren wrote in her plan, which she posted to Medium May 8, that Americans deserve “[a]n America where when people like the Sacklers destroy millions of lives to make money, they don’t get museum wings named after them, they go to jail.”