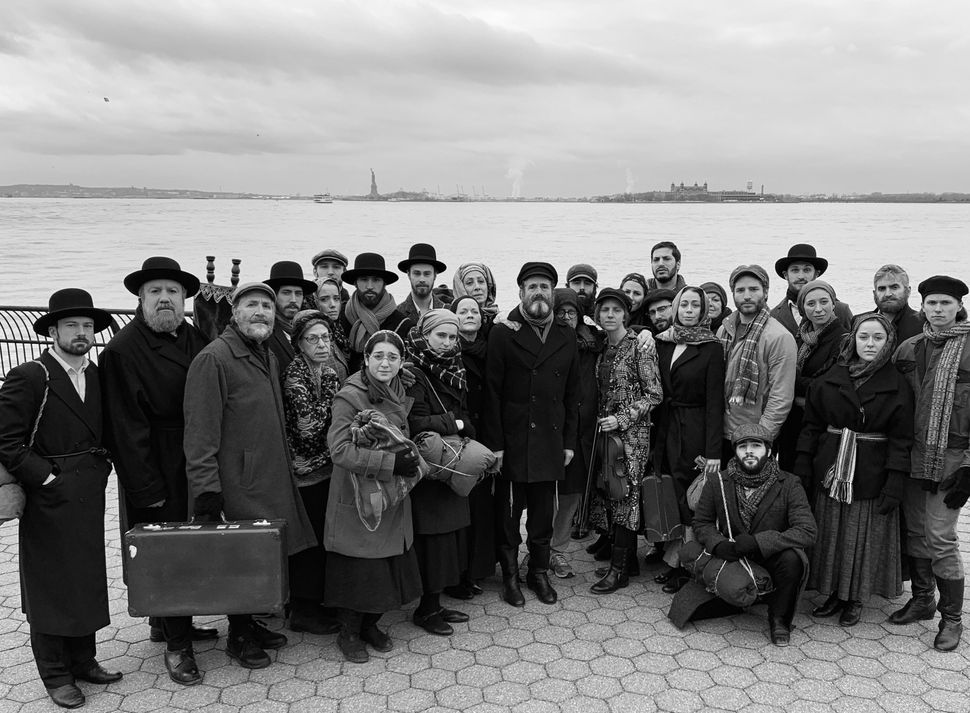 The cast of the Yiddish Folksbiene production of ‘Fiddler On The Roof,’ in Battery Park Image by Courtesy of Joel Grey

Samantha Hahn was the youngest member of the critically-acclaimed National Yiddish Theatre Folksbiene production of “Fiddler on the Roof” (she played Tevye’s youngest, Beylke). She’s also an author. In advance of a NYTF book party and discussion May 2, we are excerpting from her book “On the Roof: A Look Inside Fiddler on the Roof in Yiddish,” reprinted with the permission of Pegasus Publishers. The book collects testimony of the cast, crew and creative team, shining the spotlight on the inside story of the historic production. In the following excerpt Hahn recalls entering into a very different sort of shmata business and finding her way into a new — and old — tradition.

To get into the ethos of our Anatevka characters, we were told to come to rehearsal with shmatas tied around our hair, long rehearsal skirts, and no makeup. This quickly became referred to as our “shtetl-chic” look. Some wore it gracefully: Rachel Zatcoff in a colorful shmata and patterned wrap-skirt to pair with her cute tank tops and T-shirts. Others, namely myself, brought in their roommate’s scarf to messily twist around their head for the first choreography rehearsal. Luckily, I had Amazon Prime and quickly ordered myself a normal shmata, which I suddenly had a gaggle of older sisters to help me tie. Stephanie Lynne Mason, the second oldest of the sisters, gleefully taught me how to properly wear a shmata — the first of many lessons from my incredible show sisters. We all took turns holding each other’s hair, as we still do in the dressing rooms sometimes.

Rehearsal was in a large, open classroom at the Museum of Jewish Heritage, just across the hallway from the theatre. The hallway was covered in affecting photographs from the museum, which to me seemed to serve as a daily reminder of the history we were portraying with our story of “Fiddler.” On one side of the classroom were high, thin windows with cabinets underneath, in which we stored our belongings. On the other side were tables where stage management and our directors sat — far too close for comfort when working on a scene.

The stage management table fascinated me though; I loved the endless supply of tissues, hand sanitizer, cough drops, and multi colored tape that perched in front of their binders and laptops. More than that, I loved how every so often Joel Grey would toddle over to the stage management table and carefully unwrap a lemon cough drop to place in his mouth, as if Ricola was the finest of delicacies. Joel brought in a huge banner that said, “Fiddish Spoken Here,” meaning “Fiddler” Yiddish, and hung it on the wall for us all to sign. 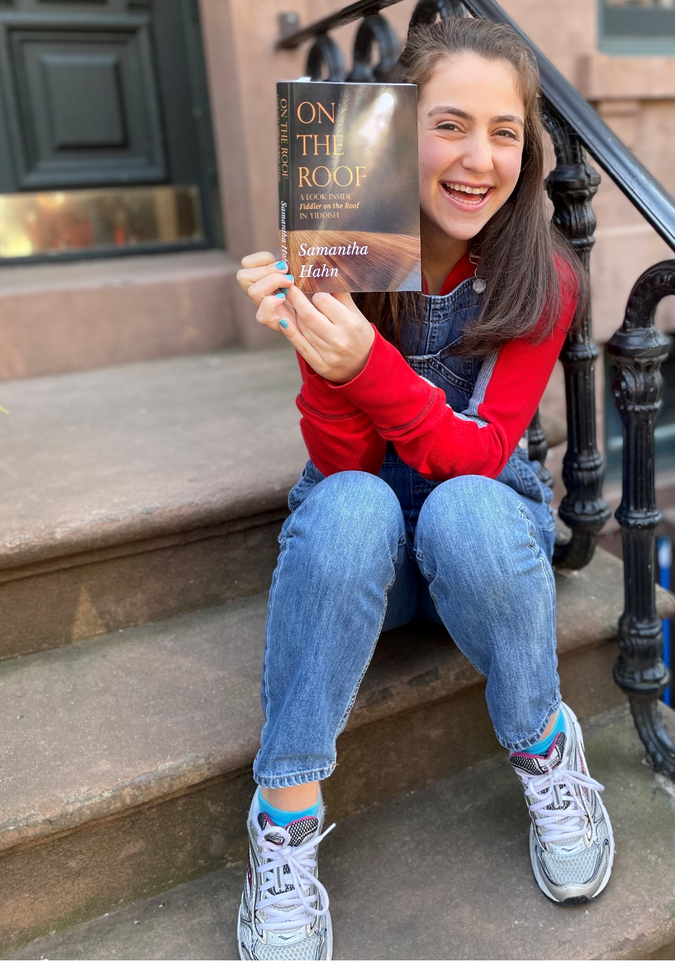 Samantha Hahn poses with her book “On The Roof: A Look Inside Fiddler on the Roof in Yiddish.” Courtesy of Samantha Hahn

The first number we staged was the opening number, “Tradition.” Staś Kmieć started the rehearsal by having us get into a big circle, which took up most of the room. He gave us a speech about “tradition”: how important it is to our characters, and how much heart, pride, and community is encapsulated in the word. Joel asked us to really consider what the word “tradition” meant to each one of our characters.

We started learning the classic arm-pumping motion of “Tradition” while simply walking around the room to get a feel for the action. Staś explained that the pulse comes from the chest — the heart center; that is where all the pride and love for our shtetl emanates from. We walked around in circles, pumping our arms for long enough that everyone was either thinking: what the heck are we doing? or I think my arms are going to fall off.

When we broke for lunch, wondering what the heck we had just accomplished, the cast headed outside to eat. The sun was shining on the two picnic tables outside of the museum, which became our cozy little lunch spot. I had packed my lunch — a responsibility I all too quickly abandoned as soon as I found out that the deli down the street made a delicious and reasonably priced grilled cheese sandwich. The packers went straight to the tables, and the buyers trickled in later, describing their food purchases to the ogling table of people. We didn’t have to make as much awkward chatter as I had imagined; in fact, our lunch time flew right by. We immediately bonded and laughed over the ridiculousness of the never-ending arm-pumping we had just done, and it seemed to me like we were all already some sort of little family.

Later on, we headed back to the rehearsal room and learned the real choreography for “Tradition.” The number starts with us all holding hands and stomping in unity: walking onto the stage as one big, proud shtetl. To me, that is exactly what we have always felt like.

We made eye contact across the circle and squeezed each other’s hands just for the fun of it. We bickered amongst ourselves over the best way to keep track of how many pulses we did before we were supposed to stop — a detail that is so second nature to us now that I can’t even remember how we pinpointed it. We all laughed hysterically when Staś stopped to work on the turns with us and Jackie Hoffman exclaimed, “Every turn is a bane!” We delighted in the small vignettes as we saw each other’s characters come to life for the first time. We all reveled in the beauty, anticipation, frustration, excitement, and joy of learning the opening number with our entire cast.

I went home that night and took a shower, put on my pajamas, turned out the lights, and crawled into bed. A minute later I got out of bed, turned on the lights, took the pillow case off of my pillow to wrap around my head like a shmata, and practiced the “Tradition” choreography. Even in my little bedroom, wearing my “Yertle the Turtle” hand-me-down pajama shirt and my blue pillow case around my head — it felt like I was doing something special.

Samantha Hahn is an author and actress, most recently having made her Off-Broadway debut as Beylke in “Fiddler on the Roof” in Yiddish. She studies musical theatre at Manhattan School of Music, and is the voice of Trinket the Unicorn on Nick Jr.’s “Nella The Princess Knight” in both the US and UK. Samantha is currently storytelling in New York City. Official website: sammyhahn.com