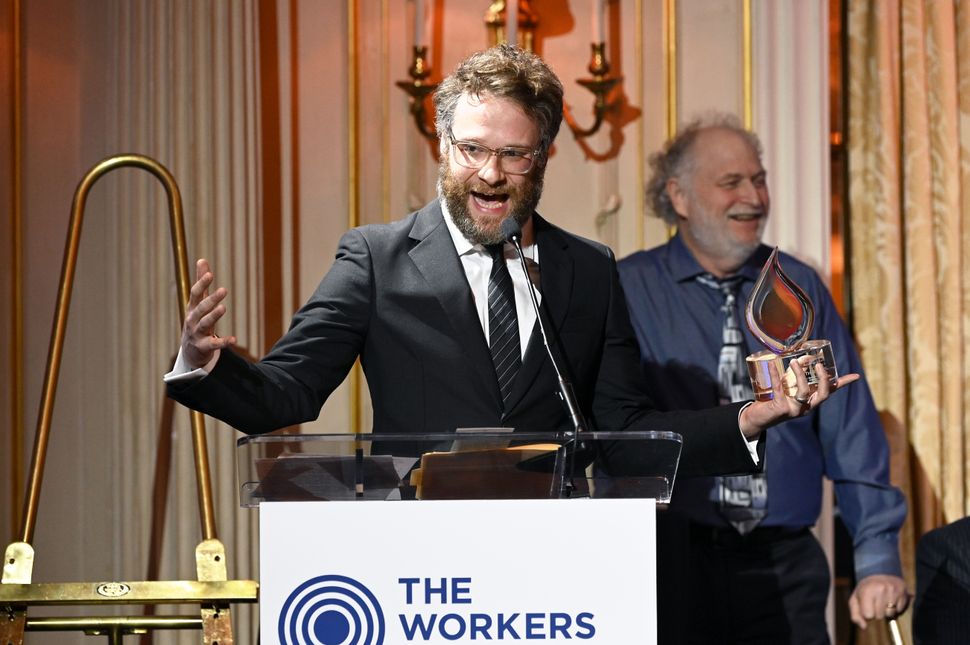 It’s been nine months since Seth Rogen agitated the Jewish community by expressing a sentiment increasingly common among his generation. You’d be forgiven for forgetting all about it.

In August, the actor-writer appeared on Marc Maron’s podcast and said he was “fed a huge amount of lies about Israel” throughout his Jewish education. The backlash against Rogen’s presumed anti-Zionism was so pronounced that he went to Haaretz to set the record straight (after speaking to the Jewish Agency’s Isaac Herzog at the behest of his mother). Since then we’ve been more attuned to Rogen’s pottery and pot business and his double turn as a Jewish millennial/pickle-making forebear.

Still, there was always the outside chance that “Yearbook,” Rogen’s first go at authorship, out May 11, could further upset the establishment; the jacket copy promised remembrances of his Jewish grandparents, bar mitzvah and travails at Jewish summer camp. It certainly delivers some subversiveness on each of these topics — but “Goodbye, Columbus” this ain’t.

Rogen’s book, a series of autobiographical essays that often feel of a piece with the oeuvre of Tucker Max (if Tucker Max was a sensitive Jewish feminist who focused more on embarrassing experiences with drugs and less on sexual conquests) is most notable to non-Jews for its many celebrity anecdotes. Some, including a recording session with Snoop Dogg’s backup (as in contingency) motivational dancers and Rogen’s brief meeting with George Lucas, who apparently bet it all on the world ending in 2012, have already been reported. But for Jews, the book may strike a nerve, or prompt entertained nods of recognition.

The first chapter, “Bubby and Zaidy” reveals the young Rogen’s early insolence for Jewish elders — his first standup sets were making fun of his grandparents (they loved it). Rogen valued b’nai mitzvah parties for chances to slow dance and scream obscenities to Billy Idol’s “Mony Mony” (who doesn’t), And we come to find that the rising standup’s first paid comedy gig was writing jokes for a mohel, and from that bizarre arrangement comes the following exchange between Rogen and childhood chum Sammy Fogell (the namesake of McLovin aka Fogell from “Superbad”):

While the book’s structure is more or less scattershot, these early chapters lay the groundwork for Rogen’s sensibility when it comes to Jewish topics. He is not above a little blasphemy in service of a broader dissection of Jewishness, if not the most astute one available.

“Even if you don’t believe in Judaism, you, my friend, are still a Jew,” Rogen says in the final chapter — the tale of a botched hike in Jewish summer camp. (In telling the tale, he challenges the Jewish camp system’s “gross,” if effective, ploy for Jewish continuity by inspiring Jewish kids to one day “impregnate/be impregnated by other Jews.”)

“Maybe that’s why Jews are Jew-ish,” Rogen offers. “It’s more vague and casts a wider net than other religions.”

If his definition here seems likewise vague — and his tongue-in-cheek rendering of an Israeli’s dialogue as “Baruch Falafel Knish” disrespectful — we should consider the place it’s coming from. Rogen is being coy about what his background means to him while expressing it constantly.

While Rogen could have devoted his entire book to his strange interactions with Nic Cage, his bad shroom trips and perhaps exclusively to “The Interview,” a film that single handedly lead to the hack of a major company and an escalation of tensions between the United States and North Korea, he opted to devote about a quarter of its nearly 300 pages— and many more asides — to his Jewish experience. And it’s not all making fun.

“Yearbook” is light reading, with the exception of one chapter devoted to Rogen’s showdown with Jack Dorsey, the CEO of Twitter. And while this chapter contains an image comparing a Haredi Jew to a Tolkienesque wizard (a lazy and offensive comparison that got Rogen in trouble last August) it is also thrumming with rage for how Twitter continues to platform white supremacists.

“[I]n October 2018, I found myself living in downtown Pittsburgh,” Rogen writes toward the end of the chapter. “I woke up one Saturday morning and checked my phone, learning about the Tree of Life terrorist attack minutes after it started, about three miles from where I was sitting.”

To Rogen, it was obvious how the shooting happened: Twitter. He continues to condemn how Dorsey coddles a bigoted worldview, even after his January ban of Trump.

In the book, Rogen’s Jewishness, from his playful jabs at tradition to his regular rebuke of mass incarceration of Black people for drug offenses, lies in a spirit of activism and active questioning. We see where he gets it from. Early on, Rogen recounts how his dad, Mark, once disrupted a public menorah-lighting to protest a guest of honor’s conservative politics. (Both men received a Workers Circle honor for multi-generational activism in 2019).

It’s possible given the reception of Rogen’s past remarks that some, seeing him write for a general audience, may take issue with how he handles Jewish topics — the joke about blood libel (only if the baby has “EXTRA-tasty blood”) may be too much for pearl-clutchers. That takes nothing away from the truth of his account. It’s an honest document, and a mostly welcome demonstration of values we often talk up and fall short of.

Still, reading “Yearbook,” one can’t help but feel that Rogen’s real gifts lie in dialogue. His stories of a kibbutz-modelled Jewish summer camp are screaming for a big screen adaptation. I’d be first in line for a ticket — picket line or no.