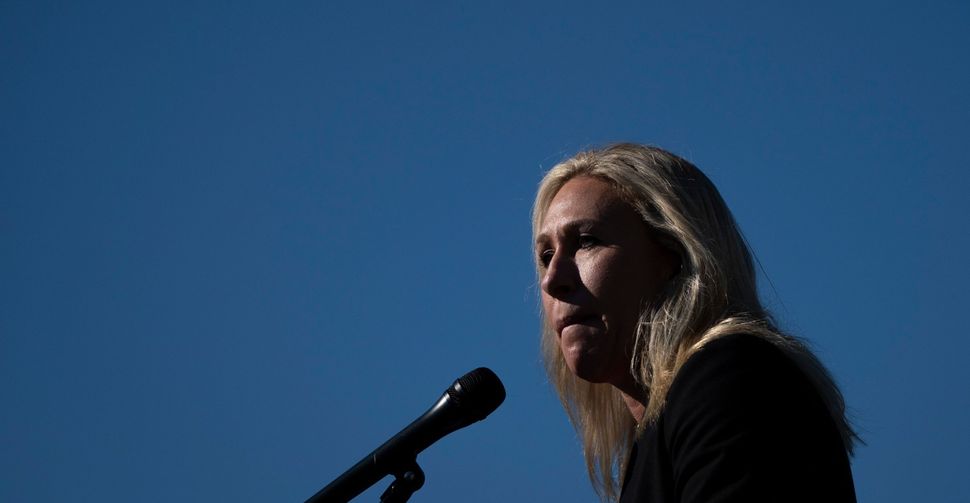 Rep. Marjorie Taylor Greene, who had a storied pre-Congress career spreading lies about Rothschild-funded space lasers, tweeted in support of Jewish lives Monday night and just this morning trotted out a Jewish conspiracy theory. Both tweets were bad in distinct, but non-mutually exclusive ways.

Tweeting something like this to Omar, one of three Muslim members of Congress, who did not in any way allude to Hamas in her tweet — and, though fiercely critical of Israel’s actions in Gaza, has never endorsed Hamas — is Islamophobic. (Greene’s not alone in alleging Omar’s support of the terrorist organization, but that doesn’t make the accusation any better or more true.)

Many Jews didn’t take too kindly to being used as props in Greene’s attack.

I am occasionally called upon to speak for All Jews, which is my role, as verified by @neilhimself and would he lie to you?

But just in case you thought Greene was sincere at least in caring about Jews, she offered up this whopper around 13 hours later: “Being woke is a religious cult. Bowing to the false god of social, racial, and climate justice in the freest country in the word is a fools [sic] pursuit. It leads to devastating socialism and communism, or some awful form of both.”

A typical enough Conservative talking point these days, but then the kicker, “George Soros is the father of it and he funds it.”

Being woke is a religious cult.

Bowing to the false god of social, racial, and climate justice in the freest country in the world is a fools pursuit.

It leads to devastating socialism and communism, or some awful form of both.

George Soros is the father of it and he funds it.

So, let’s review. Greene accuses a Muslim colleague of being a terrorist while using Jewish Israelis to mask the smear (and problematically conflating Israelis and Jews). About a half a day passes and Greene peddles a narrative of Jewish control that has in our very recent history killed Jews.

The two messages are in no way incompatible, just different flavors of nativism, all of which hurt Muslims, Jews and people of color.

But knowing Greene’s track record with the Rothschilds, she may not even know George Soros is Jewish.