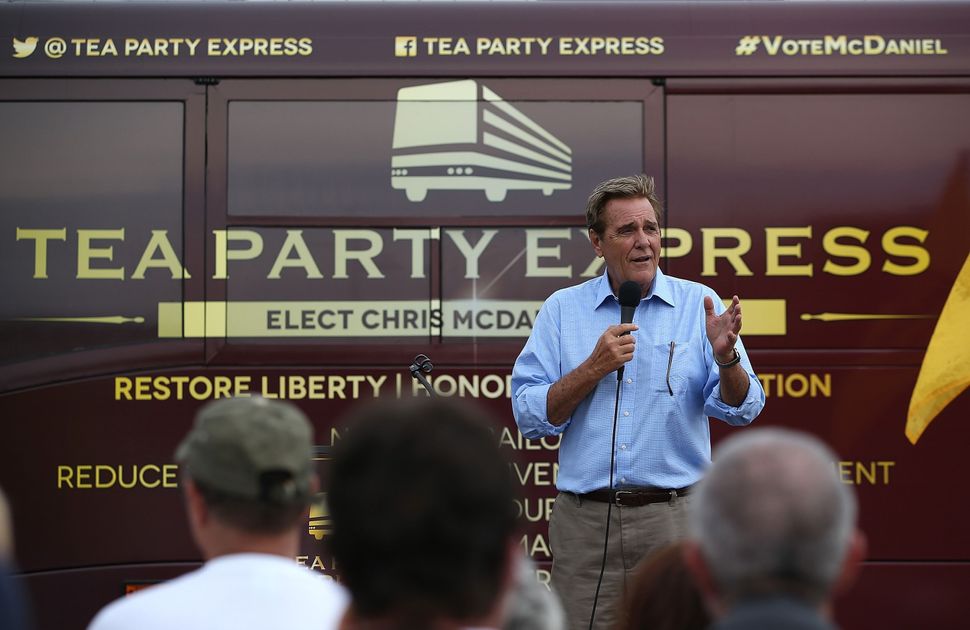 Chuck Woolery speaks in support of republican candidate for U.S. Senate, Mississippi State Sen. Chris McDaniel during a Tea Party Express campaign event at outside of a Hobby Lobby store on June 22, 2014 Photo by Getty/Justin Sullivan/Staff

Chuck Woolery, the arch-conservative game show host and catheter pitchman was slammed on Twitter for appearing to take an “enemy of my enemy is my friend” approach to… Hitler?

In a Memorial Day post, Woolery tweeted “Critical Race theory is based on Critical theory, given to the world by Marxists from the Frankfort School [sic] in Germany. When Hitler cracked down on them they moved. Yes they moved to Columbia University in NYC and they remain there to this day.”

Critical Race theory is based on Critical theory, given to the world by Marxists from the Frankfort School in Germany. When Hitler cracked down on them they moved. Yes they moved to Columbia University in NYC and they remain there to this day.

Now, to be fair, Woolery is far from the first person to level this accusation at the Frankfurt School, a group of mostly Jewish philosophers and academics striving to “liberate human beings from the circumstances that enslave them” by deconstructing the economic and political realities of their time. The school, an informal name for the Institute for Social Research, has been blamed for everything from the rise of political correctness to “cultural Marxism” to the right’s current boogeyman, Critical Race Theory.

But critics thought Woolery took things a step beyond the usual antisemitic dog whistles associated with this notion by suggesting that the thinkers had it coming when Hitler forced them into exile. (Apparently he has a history with this kinda thing.)

When someone wondered, in a leading way, why Hitler “cracked down” on the likes of Walter Benjamin, Theodor Adorno and Herbert Marcuse, Woolery replied “Because they were Communists” (they weren’t), adding “Remember WWII when Germany declared war on Russia?” (The school moved well before the Nazis declared war in the summer of 1941 — and even before the Nazi-Soviet Nonaggression Pact.)

Whatever Hitler’s reasons for being hostile to a group with a heavy Jewish makeup that was explicitly anti-fascist, intimating that Hitler got this one right is not a good look. Thankfully, Twitter took him to task for this historically awful and illiterate take, causing him to trend.

Hitler didn’t crack down on these professors b/c of their academic work, but because they were Jews.

Woolery denied he was “siding with Hitler.” He later went on to say “When I trend on twitter it’s like every liberal Marxist comes out of the woodwork to take their shot.” He also retweeted an article from the satirical page, Babylon Bee, and invited people with a different understanding of the Frankfurt School’s history to enlighten him.

OK, Chuck. Well, where to begin? I could note that the founders of the school don’t remain in New York “to this day.” They’re all like, super dead. The men were influenced by Marx, but many, notably Marcuse, were unsparing critics of communism. And even if Critical Race Theory draws deeply from their work, they’re two different things and neither mean what you probably think they do.

But then, Mr. Woolery is perhaps not the best student of history — even when it comes to stuff that happened in his own lifetime. After the Hitler kerfuffle, he honored Memorial Day by retweeting an image of a Marine at a fan’s request. It was a picture of Lee Harvey Oswald.