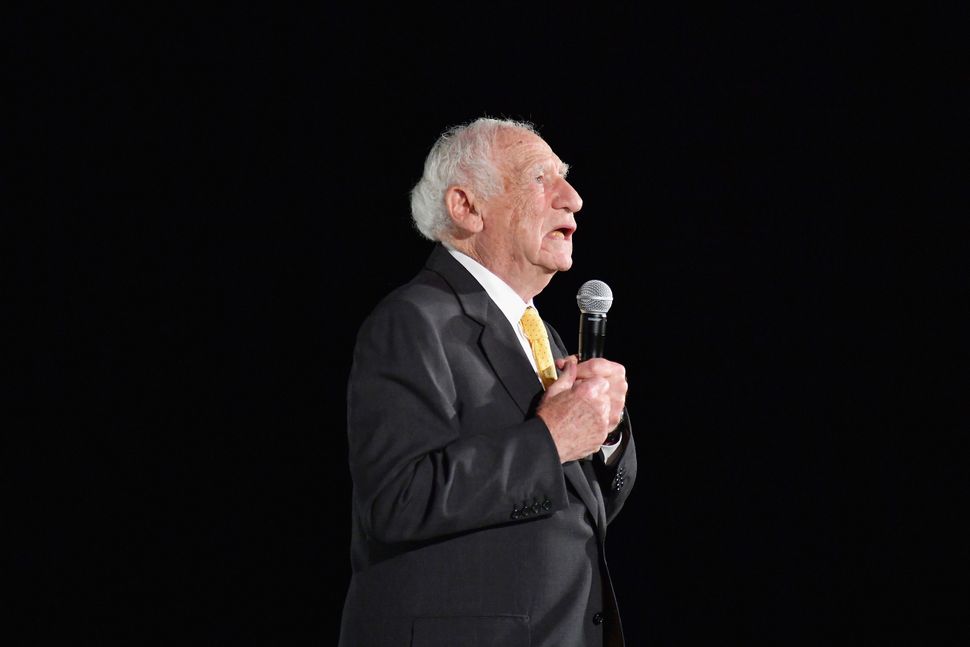 There’s a bit of trivia about the filmmaker, who turns 95 on Monday, that I often turn over in my head.

On an episode of Johnny Carson’s “Tonight Show,” Carl Reiner said that the two funniest people he knew were Brooks and a 16-year-old kid named Albert Einstein. Einstein, whose parents, of course, were comedians, later changed his last name to Brooks and became an accomplished director and writer in his own right. Whether or not it was a tribute, Albert Brooks and all comedic filmmakers — including a quite different Brooks, James L. — are toiling in the erstwhile Melvin Kaminsky’s shadow.

It’s hard to overstate Mel Brooks’ sphere of influence, felt in every genre spoof, contemporary ribbing of National Socialism and out-of-left-field musical extravaganza. It’s just as difficult to ignore how poorly some of the material has aged, particularly during Pride Month. But that’s the rub for a career of such long duration. As we approach a century of Brooks — still a far cry from 2,000 years — here are just some of the surprising ways his work keeps on giving.

Rock and Roll (and Hip-Hop)

In 1975, Aerosmith was building a song around a Joe Perry guitar riff. There was only one problem: they didn’t have any lyrics or even a title. We don’t know if they expected inspiration when they left the studio to take in a screening of “Young Frankenstein,” but they definitely found it.

“When the guys returned, they were throwing lines back and forth from the film,” Perry told the Wall Street Journal in 2014. “They were laughing about Marty Feldman greeting Gene Wilder at the door of the castle and telling him to follow him. ‘Walk this way,’ he says, limping, giving his stick to Wilder so he can walk that way, too. While all this was going on,[producer] Jack [Douglas] stopped and said, ‘Hey, ‘walk this way’ might be a great title for the song.’ We agreed.”

“Walk This Way” became a hit single. Twice. In 1986, Run-D.M.C. covered the song, featuring Perry and Steven Tyler, rocketing the hip-hop group to stardom and granting Aerosmith an unlikely renaissance. As far as we know, Brooks doesn’t get a cut of either version of the song. Or this one from Tom Petty. It’s always good to be king, but not always profitable.

Before “Hamilton” came and broke all kinds of records at the Tonys, the musical adaptation of “The Producers” was the most-awarded musical of all time with 12 wins. Broadway producers, not taking a lesson from the plot, tried to capitalize on that success and ever since we’ve been flooded with uninspired musical reimaginings of films.

Brooks’ next go at the Great White Way, a musical of “Young Frankenstein,” was nowhere near as beloved, but “The Producers” continued to have a long afterlife. It birthed a hilarious arc to the fourth season of “Curb Your Enthusiasm,” where Larry David starred as Max Bialystock. In a nod to the original film, Brooks and his wife Anne Bancroft lamented that his performance didn’t end up tanking the play as planned.

In his early years, while not writing material for Sid Caesar’s “Your Show of Shows,” Brooks dabbled in musical comedy, notably lending a hand to the profoundly weird cockroach-cat comedy “Shinbone Alley,” haunting in much the same way as Tom Hooper’s “Cats.” That’s not the end of the nightmare fuel.

While “Young Frankenstein” betrays Brooks’ enduring love of the Universal monster flicks of his childhood, he also has a more deadpan appreciation for the eerie.

He produced the 1985 film “The Doctor and the Devils,” about a 19th-century doctor who enlisted graverobbers to bring him cadavers. He also gave us film’s creepiest Davids, helping launch David Lynch’s career with “The Elephant Man” and supporting a seminal work of David Cronenberg. If you ever have nightmares about Jeff Goldblum turning into a disgusting, mucus-soaked fly, you can blame Brooksfilms.

I guess it makes sense that his son Max is known for his zombie fiction — his dear old dad likes to spook people. And not just with the horrifying misfire of “Dracula: Dead and Loving It.”

The beans scene in “Blazing Saddles” was loudly revolutionary and the arguable source of a lot of filmic fart humor. (It was controversial at the time; Brooks told Vanity Fair that executives wanted to cut it.)

Asked about his penchant for bathroom laughs, Brooks once explained that it touched on something primal, referring to a mothers’ perennial question of “didya make?” At other moments, he resented the question.

But even if he doesn’t want to be known primarily for potty talk — and obviously there’s a lot more to say about his record of bold satire and his mainstreaming of Jewish humor — in at least one instance he fully committed to it.

Behold, Mel Brooks as a toilet:

I gotta say, it still makes me laugh.