Tower of the Sacred and Ordinary installed in FENTSTER. Photo by Morris Lum

The last 16 months have felt like an apocalypse movie at many points — a global pandemic, the attack on the Capitol, a massive drought and widespread forest fires in the Western U.S., even those murder hornets that briefly made headlines.

Yet to artist and architect Daniel Toretsky, the catastrophes felt familiar; Jews have faced devastation throughout history and have adapted, creating and preserving identity through centuries of diaspora. These themes guided his installation, “Tower of the Sacred & Ordinary,” at FENTSTER, an innovative exhibition space in a storefront window in Toronto devoted to showcasing art connected to the Jewish experience. Tower of the Sacred and Ordinary installed in FENTSTER. Photo by Morris Lum

Standing in FENTSTER’s window until September is Toretsky’s wheeled tower, several feet tall, which he conceptualizes as a model for a real tower rising several floors. Each story of the building features a scene of Jewish life that Toretsky sourced from various Jewish artists and then combined into 3D drawings; Toretsky imagines our descendants climbing into the structure each Saturday night to reenact the memories.

The illustrations combine joyful memories with darker, if still whimsical, ideas. One shows people gratefully leaping into a body of water at the end of a hot day working on a Jewish farm. But under the water, there is a traditional Ashkenazi wedding floating through a flooded New Orleans, an image from klezmer musician Mark Rubin. “Seven, count ‘em, seven storms last season,” he wrote. “This recognition imbues every practice, Jewish or not, with a deeper context than is obvious to the observer.” 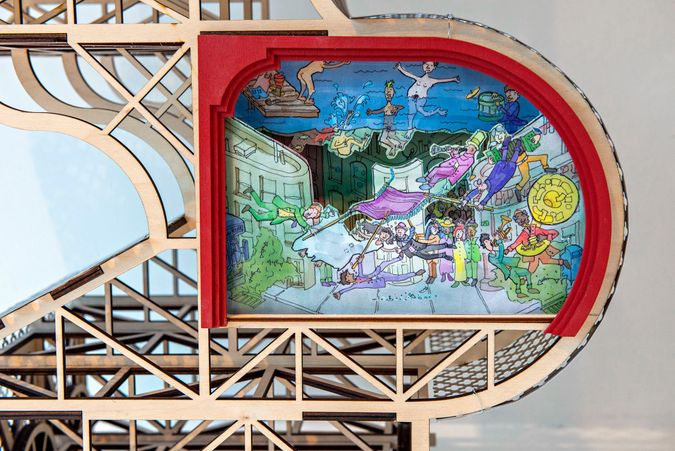 The shape of the tower is inspired by castle-shaped besamim boxes traditionally used to hold spices for havdalah, the ritual performed at the end of Shabbat. Toretsky combined the silhouettes of several spice boxes for his tower, and the sides are covered in a metallic lattice, reminiscent of the openings in the besamim boxes where the scent can waft through.

Because of COVID, Toretsky, who lives in New York City, couldn’t go to Canada, so he designed pieces with tabs that would allow it to slot together — inspired by Tauben’s son’s model train set — and had a local Toronto manufacturer lasercut the shapes. Then Tauben, the curator, and Jean-Christophe Foolchand, an artist who had worked with FENTSTER previously, assembled everything.

“It took us 15 hours to finish assembling the piece,” Tauben wrote in an email. “Thankfully it was a beautiful day and we were able to work outdoors!”

The resulting piece is multilayered and richly imagined. Toretsky spoke to the Forward about his inspirations, his Jewish identity and the creative process.

So how did you meet Evelyn, and come to create this piece? 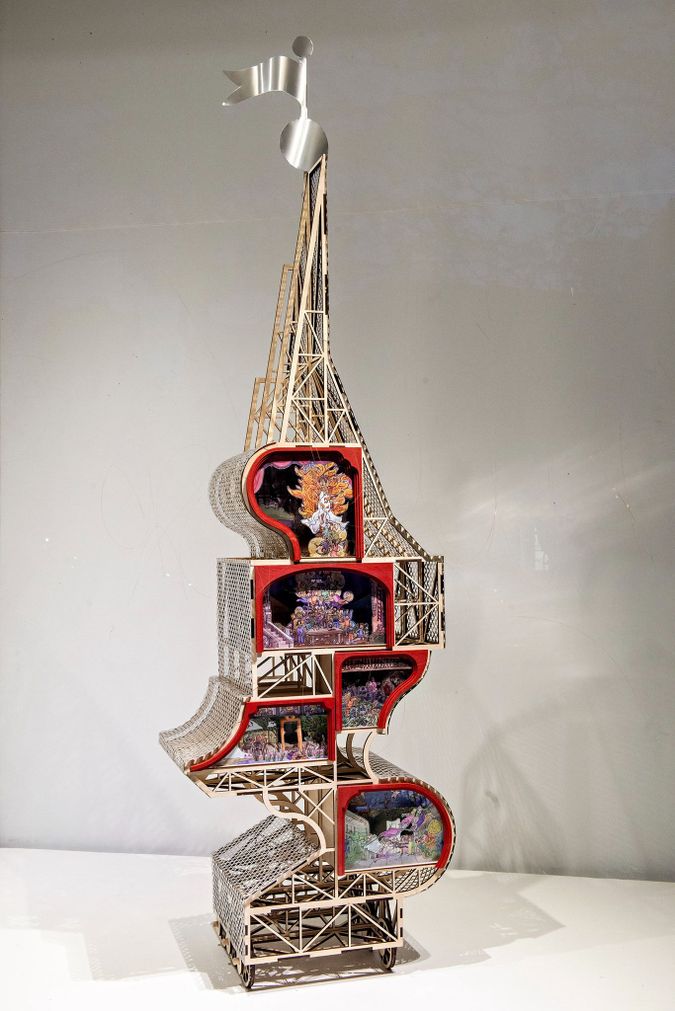 Evelyn and I both frequent a culture festival outside of Montreal called KlezKanada. It mainly focuses on klezmer, but really touches on many elements of Yiddish culture and Jewish music, and I’ve been going since I was a freshman in high school.

One aspect of it are these lectures and classes throughout the day. I went to one of them that Evelyn was doing, and afterward, I went up to her and said I’d really like to get involved. I think that was three years ago — it really took a while to come to fruition.

We had a different concept last spring, but the pandemic screwed everything up and it just became too complicated. Then this last winter, we doubled down and made it happen. But the concept changed a lot in the process — it was much more about shtetls before.

How would you describe what it’s about now?

Especially around early November of 2020, we didn’t know who was going to win the election, the pandemic was raging and we were headed right for that huge spike in the winter, there were all the wildfires and everything going on with climate change. So it really came from this place of anxiety about total collapse.

I was thinking about how people living 200 years from now might look back on our world now as almost like a utopia, kind of like how we look back on shtetls. They obviously had their issues in a big way, but we’ve romanticized them because they seem understandable and less complicated than our world now. 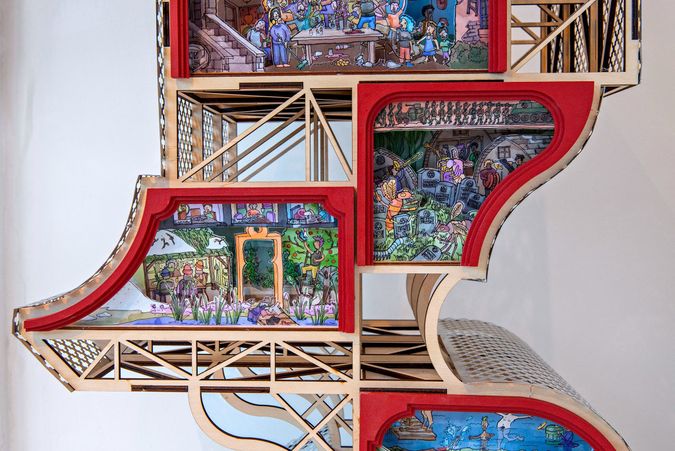 More details from the piece, including a raucous Shabbat dinner, an overgrown graveyard and a snowy Sukkot with attendees bundled in hats and scarves. Photo by Morris Lum

Similarly, various immigrant neighborhoods in North America that Jews famously moved to in the early 20th century, like the Lower East Side or Kensington Market in Toronto, have become flattened and romanticized over time, but that also serves the purpose of preserving identity.

So I was imagining that people in our future would look back on our world now and what stories they would tell about this world that we’re living in now.

This piece is deeply connected to havdalah and the besamim vessels. How does that connect to these themes of anxiety?

I arrived at this idea of havdalah by researching these portable homes that we find throughout Judaism. There’s many examples. Think of sukkahs, chuppahs, the besamim, the little castles on top of the Torah, wedding rings that are traditionally in the shape of a house. There’s all of these ways that Jews take their homes with them — they can be kind of erected anywhere because of this diasporic notion of moving all the time.

One of the things that’s particularly cool about the spice boxes is that it’s a device for triggering memories. I was reading a scholar named Miriam Lipis, and she was talking about how the architecture of the spice boxes is kind of mysterious, but the theory is that these things are made in the style of the parts of the diaspora that they come from. So in Germany, for example, you’d have Bavarian forms of architecture that become spice boxes and then travel to other parts of the diaspora and give this continuity between places.

Can you tell me more about your own relationship to Jewish identity and practice?

I grew up Reconstructionist, and I think the idea that really hit home for me is that Jewish practice is malleable, if you do your research. By understanding tradition and heritage, and then thinking through it with community — the act of researching and adapting is a really powerful way to build community and keep ritual relevant. 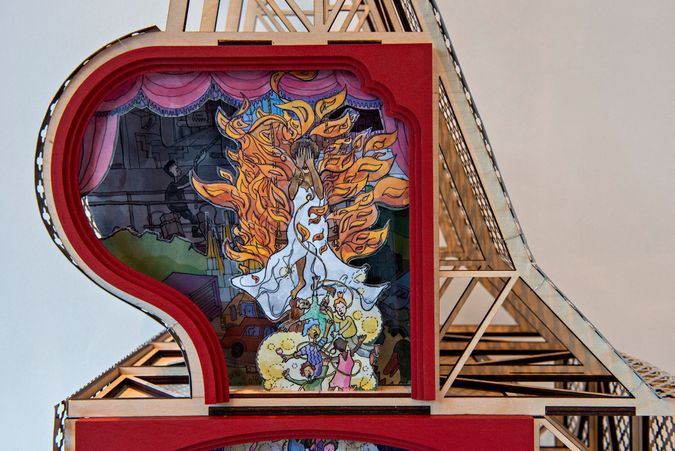 A detail from the tower, showing a personified Shabbat queen engulfed by fire. Photo by Morris Lum

The other facet is being in the klezmer world, which emphasizes diaspora. A lot of Jewish culture in the diaspora takes whatever is happening in Israel and says, “This is Jewish culture now.” I think there’s this beautiful alternative, which is embracing your roots within diaspora. For me, that was the klezmer world and Yiddish culture, and that continues to be a really vibrant and politically charged community for me today.

For me, this project has a very strong affirmation of celebrating diaspora and the kinds of adaptations that Jews have made on the road in order to preserve identity and make community.

“Tower of the Sacred and Ordinary” is on view 24/7 at FENTSTER located in the storefront window of Makom, 402 College Street, Toronto. An online exhibition event will be presented as part of the digital KlezKanada Summer Retreat on Thursday, August 26 at 3:45 p.m.