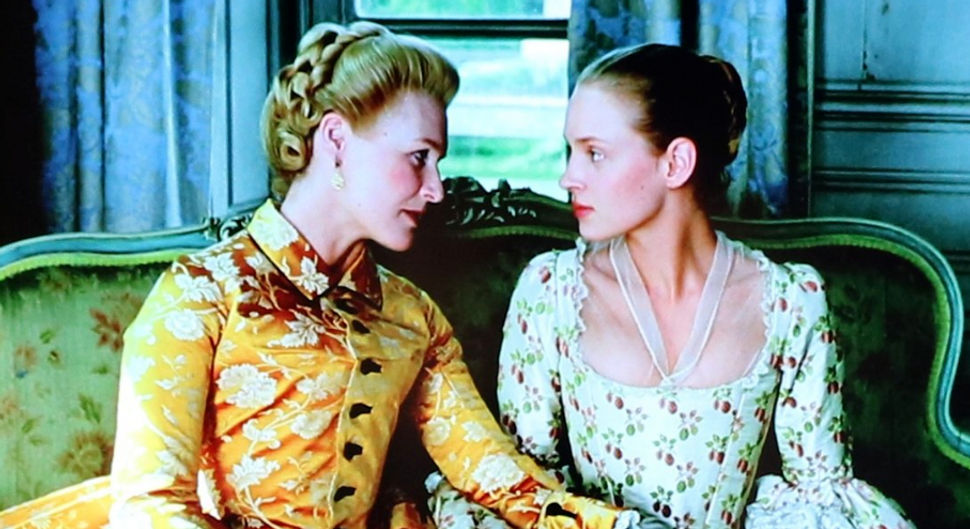 The improbable hybrid of a tallit, a Jewish prayer shawl, and a sajjada, a Muslim prayer rug. A family recipe for an Iraqi date pastry that evokes layers of Arab-Jewish identity. Glazed stoneware for trans Jews to use in ritual practice. A film of screen recordings and Zoom exchanges about disability and displacement. 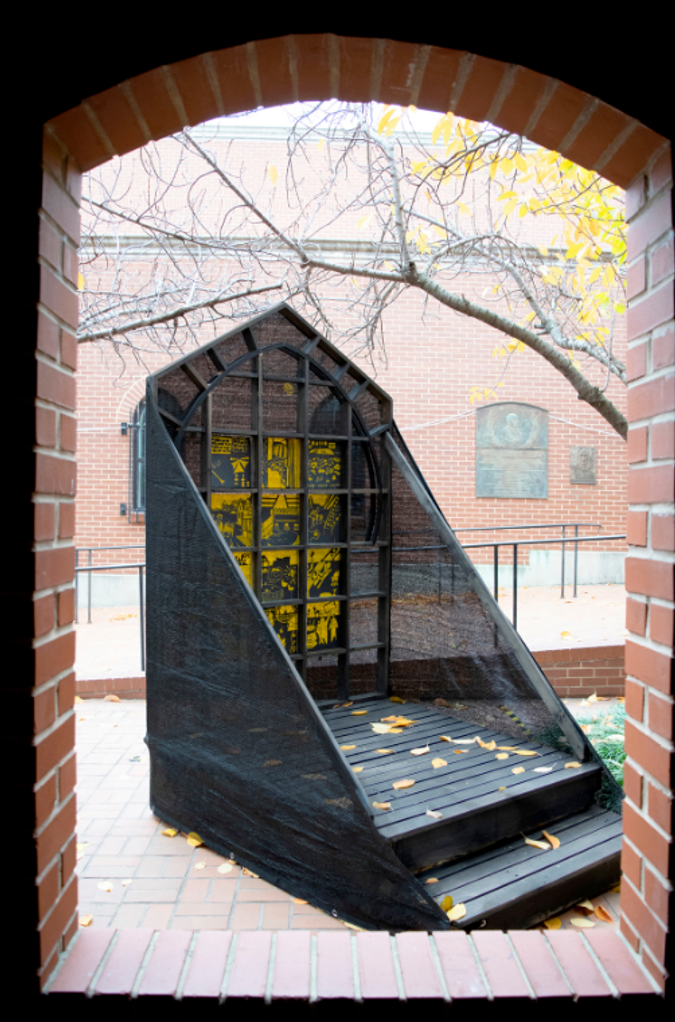 Toretsky describes his installation in the JMM’s courtyard as “both an act of defiance and a reaffirmation of Jewish peoplehood.” Photo by Daniel Toretsky

These works, and many others, are on display at the Jewish Museum of Maryland as part of a multimedia exhibit called “A Fence Around The Torah: Safety And Unsafety In Jewish Life,” curated by Liora Ostroff.

The exhibit’s title comes from Pirkei Avot, which instructs us to “make a fence around the Torah.” But as the exhibit points out, safety practices, designed to protect Jewish communities, can also perpetuate harm for diverse Jewish groups. For instance, as exhibit contributor Ami Weintraub, a teacher and organizer, has argued in the Forward, the increased presence of police in Jewish spaces can make those spaces unsafe for Jews of color, as well as other people of color. 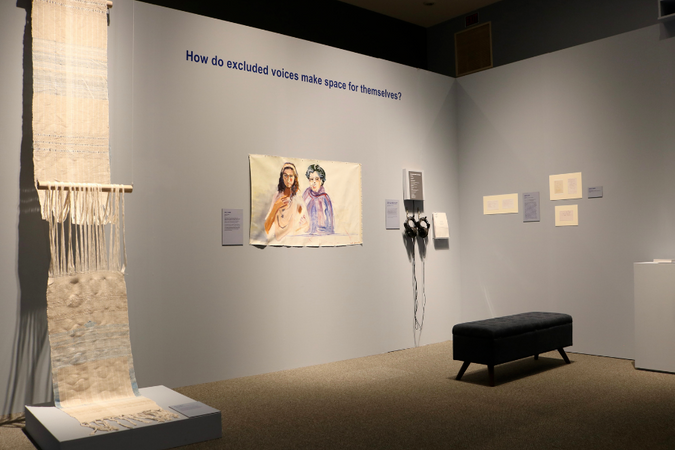 Before the exhibit opened, Ostroff and the museum’s executive director, Sol Davis, partnered with representatives of various Baltimore organizations to hold conversations about safety in different areas of Jewish life. “The material and content of the exhibit are co-authored and co-created with artists and the community,” Davis wrote in an email.

The exhibit’s representation of Jewish life is radically complex and controversial, and highlights the role that Jewish museums can — and, the exhibit argues, should — play in uplifting Jewish identities that have been historically underrepresented.

Davis said that “A Fence Around The Torah,” his first full-scale exhibit at the museum, “can serve to build bridges of understanding between segments of the Jewish community.”

“This is a living exhibit that engages with Jewish life in the present and supports us toward envisioning and building the Jewish future,” he wrote in an email.

For Danielle Durchslag, the exhibit is an opportunity to share a work — her film “Dangerous Opinions” — which, because it criticizes wealthy American Jews’ identification with victimhood and their unwillingness to discuss the Israeli–Palestinian conflict, she has struggled to display.

“The challenge for me in trying to present my work publicly is that in Jewish cultural output, there are two poles that are generally lauded and accepted,” Durchslag said. “One is content about our victimhood, and the other is content that is somehow promotional about us.” Marisa Baggett portrays how security that makes one Jew feel safe can make another feel unsafe. Courtesy of The Jewish Museum of Maryland

More museums, she said, need to feature critical work that falls in between those two poles. “If Jews are fully human, and I strongly suspect we are — in fact, I know we are — then we’re not just good guys and victims,” she said.

“The radical thing I want to suggest is that presenting ourselves in that way is in and of itself antisemitic because if we’re fully human, then we’re everything — the good, the bad and the ugly.” 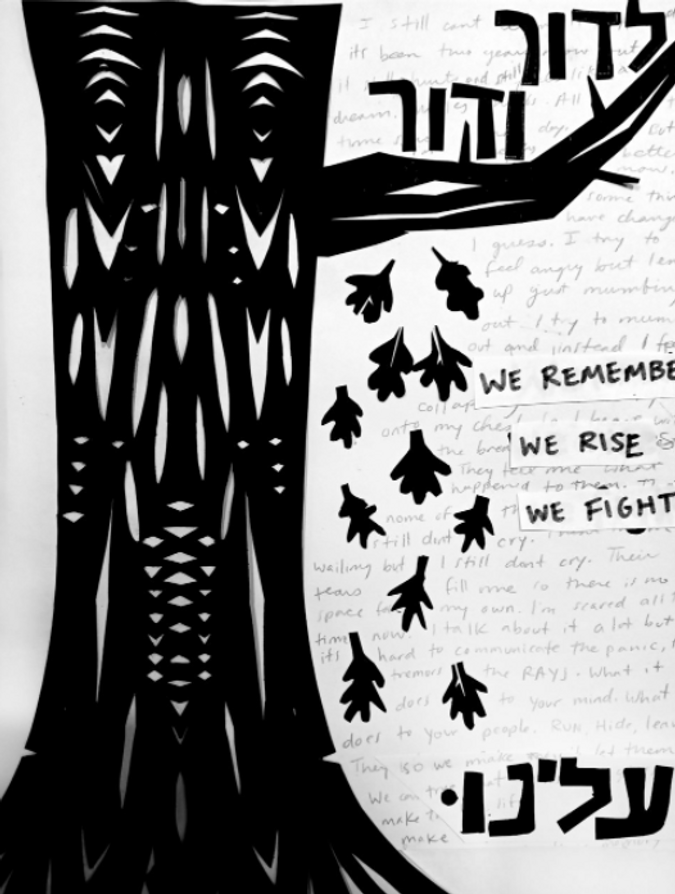 The Jews of Blois recited the Aleinu while being burned alive. Courtesy of The Jewish Museum of Maryland

The exhibit examines that spectrum, as well as the impact of antisemitism. Weintraub’s contribution to the exhibit, a wheat paste poster called “L’Dor V’Dor” and made in collaboration with the Rebellious Anarchist Young Jews Collective, chronicles some of the history of antisemitism, connecting the Tree of Life Synagogue shooting in 2018 to the murders that followed the first case of the blood libel in continental Europe in Blois, France, in 1171.

“It’s important that people keep their eyes on Pittsburgh and know we’re still grieving and that we’re still in a lot of pain — and not just from that one event,” Weintraub said.

“What happened here is a bigger story than just that one moment, and it’s ongoing.”

The poster, like the exhibit overall, speaks to how art can be essential to both engaging with history and dealing with contemporary issues. “Art allows us to reinvestigate cultural loss, reframe cultural narratives, and illuminate connections between past and present problems,” curator Liora Ostroff wrote in an email.

For instance, Marisa Baggett’s painting “Are You Jewish?” reflects the painful impact of racial profiling in Jewish spaces, a response to rising antisemitism.

The self-portrait depicts Baggett after being denied entry to a synagogue where she has worshipped and worked as a chef. Her transgression? Wearing her hair in its natural state.

Sometimes a stranger will visit her shul, Baggett said, and treat her like she’s the stranger. “It doesn’t feel safe. It doesn’t feel welcome. You feel like you’re constantly on trial, and it goes against everything in our Jewish principles,” she said. “We have to do more than just welcome the stranger — we have to welcome ourselves.” 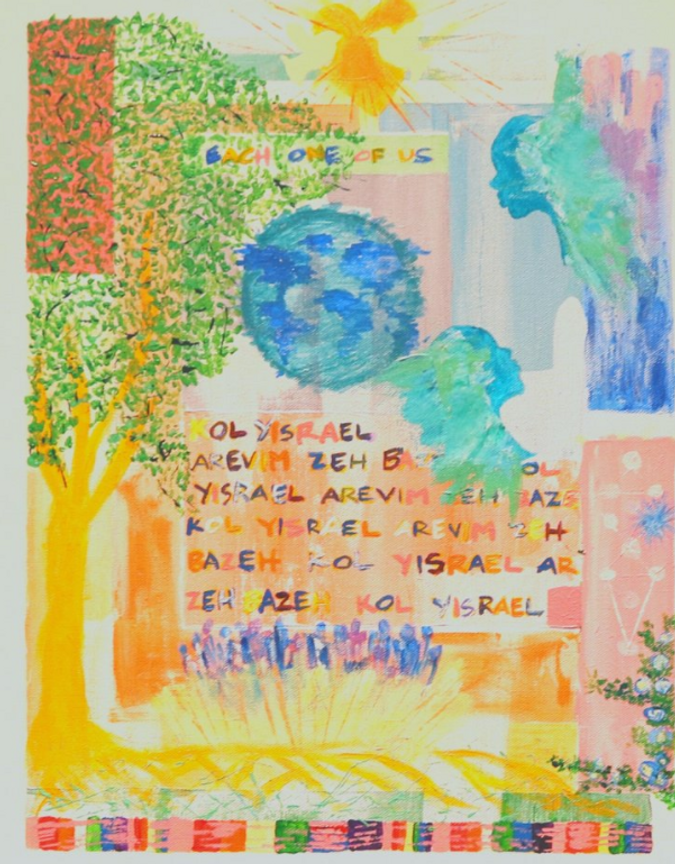 Marisa Baggett envisions a future where all Jews’ communal needs, including safety, are met. Courtesy of The Jewish Museum of Maryland

Yet Baggett’s other work in the exhibit, “Talmud Shenui,” imagines a vibrant, multicolored Jewish community where everyone is recognized and included — something of a throughline for the vision of the entire exhibit.

“We have to keep representing our beautiful, wonderful experiences and selves in Jewish spaces, where we belong,” Baggett said. “We have to keep persevering to show that we’ve always belonged and that our experience is a valid Jewish experience.”

Update: While the Jewish Museum of Maryland temporarily closed due to the omicron variant in December, the museum announced on Jan. 31 that it will reopen to the public on Feb. 6. The exhibit is on view until Feb. 13. Additionally, most of the art can be viewed online.