Kyiv or Kiev? Zelensky or Zelenskyy? For Ukraine, spelling is a political act 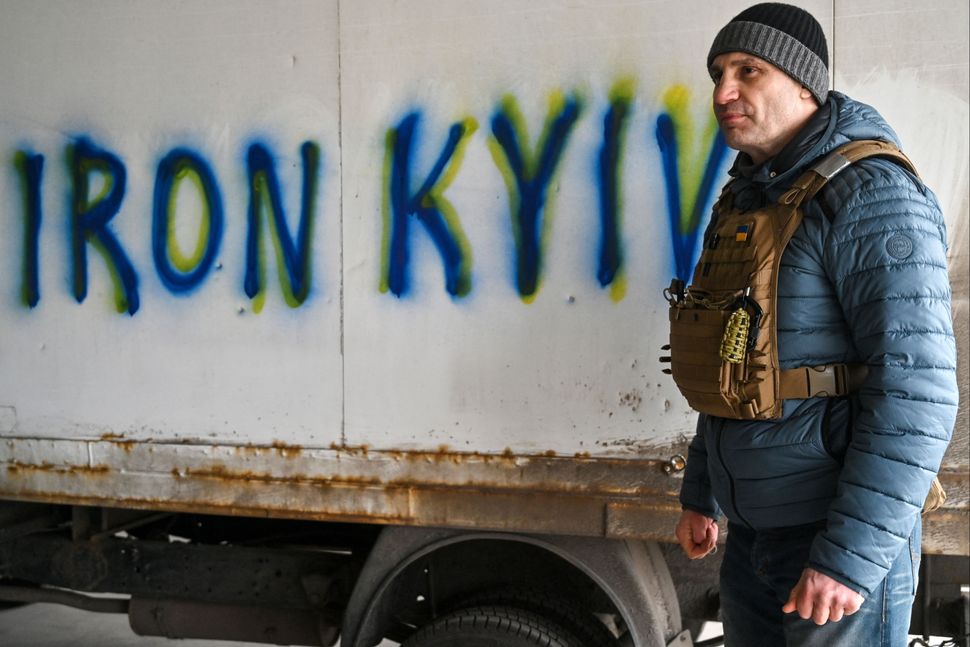 On the Outskirts of Kyiv: Mayor Vitali Klitschko stands at a checkpoint. By Getty Images

As tanks advance and homes burn while the Russian invasion of Ukraine intensifies, the spelling of place names may seem like a minor concern. But spelling — and the English transliteration of it — can have tremendous political significance. Spelling can also indicate how credible a news source is, and it can clarify which side a source is on.

Let’s start with Kyiv, a major city currently under threat.

“Kiev is the Russian spelling — the transliteration of Киев, while the correct spelling is Kyiv — Київ in Ukrainian,” said Roman Ivashkiv, director of the Ukrainian Studies program and Slavic Languages Program coordinator at The University of Illinois at Urbana-Champaign.

“Ukrainians do not want the name of their capital city to be transliterated from Russian because it is reminiscent of the colonial past, including all of the injustices committed against Ukraine and Ukrainians.”

Going with “Kyiv” is also a matter of acknowledging a basic fact — that Ukrainian is the official language of Ukraine.

“The simple logic is that the name of the country’s capital city should be transliterated and transcribed from that country’s state language, that is, Ukrainian,” Ivashkiv said.

Importantly, spelling it as Kyiv means you acknowledge that it is a Ukrainian city, which is of course a major factor in this war.

To put it plainly, it’s about whether you agree with the worldview of Vladimir Putin.

“If you use Kiev you signal (whether you want to or not) that you support Russian imperialism,” said Shevchuk, who just wrote a new Ukrainian dictionary. “Just like you would insist on calling the Polish city of Wroclaw with its German name Breslau as if it were still occupied by the Nazis.”

“It is not merely a linguistic issue, however, not just a difference in one letter or in pronunciation. It is clearly political,” said Ivashkiv. There is also a history of oppression which is certainly relevant right now that is reflected in this linguistic question.

“Since the late 18th century, central and eastern parts of contemporary Ukraine had been subjugated by the Russian Empire, which treated the Ukrainian language with utmost hostility, hindering its development and even officially prohibiting its use.

A similar hostile attitude continued in the Soviet Union,” Ivashkiv noted. “Thus for centuries, the world could only learn about Ukraine and about Kyiv primarily from the imperial Russian and later Soviet sources. Of course, these sources reflected the colonizer’s perspective, manipulating historical facts and presenting Ukraine as this southern part of Russia, also known as Little Russia.

“This also meant that the literature about Ukraine available in English and other world languages mostly relied on these Russian sources and perpetuated the colonizer’s perspective.”

“Today, however, 31 years after the dissolution of the USSR, Ukraine is a sovereign independent state, whose official language is Ukrainian — even though many people for historical reasons speak Russian. And so it is only reasonable that Ukraine wants a say in how its capital city’s name should be transliterated (or romanized from Cyrillic),” Ivashkiv said.

This is a moment when many in the community of writers, translators, and scholars are thinking of history and its long arc. “I lived in Kyiv a long time ago, long enough ago to remember people pointing out the scars of the Nazi occupation,” said translator Katherine Young, who has translated the Ukrainian writers Lyudmyla Khersonska and Iya Kiva. “To see the city under siege now, to know that my friends and people I care about are there — I really don’t have words for this feeling.” 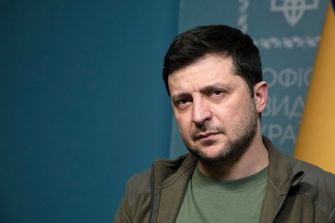 Two Y’s or One? Some scholars say that the difference in the spellings of Zelenskyy are inconsequential since both spellings are pronounced the same way. By Getty Images

Some linguists say this whole issue of spelling is the continuation of a historical pattern.

“There is nothing new about this commotion with proper names and toponyms,” or place names, says Volodymyr Dibrova of the Ukrainian Research Institute at Harvard. “Every time a new nation appears on the map it wants ‘to restore justice’ and ‘return to the roots. Thus Gelsingfors became Helsinki, Kristiania; Oslo, Wilno; Vilnius, Tiflis, Tbilisi, etcetera. And thus Kiev, Kharkov or Lvov are now (quite rightly) called Kyiv, Kharkiv and Lviv.”

“But there is always a danger of overdoing things,” said Dibrova, who has written and translated many books, including one that the BBC’s’ Ukrainian Service Book of the Year Award. “I believe there is absolutely no need to turn Zelensky or Brodsky or Sarnavsky into Zelenskyy etc. If only because phonetically it is pronounced the same way.”

“Yet there are always people who want to stress the ‘uniqueness (i.e., Polish-ness, Russian-nes or Ukraine-ness of their family name ending). Thus Poles would present it as Zelenski, Russians – as Zelenskij, Ukrainians – as Zelenskyj or, as you suggested, Zelenskyy,” Dibrova said.

“In reality, it does not matter, because it is pronounced the same way,” said Dibrova. “On the other hand it could be very important as a marker of your identity (Husak vs Gusak, Belorus vs Bielorussia, Moldova vs Moldavia, Ukraine vs the Ukraine). So sometimes it becomes a very sensitive issue. It immediately shows “what side you’re on.”

“For example,* -ev,* ov endings (Kiev, Vasilkov, Kanev, Nemirov) are definitely Russian, -uw – Polish, -iv or – jiv – Ukrainian. And any Ukrainian speaker will immediately spot it and interpret it as a political stance,” Dibrova said.

The same language issues are present in the place name Babyn Yar as opposed to Babi Yar.

Ivashkiv certainly sees these issues of spelling as political.

“The political significance is tremendous because the spelling Kyiv stands for Ukraine’s desire to finally get rid of its colonial past and to be able to write its own historical narrative rather than using the one created by the empire that for centuries has repeatedly wanted to destroy it,” Ivashkiv said.

“It is very important because today the spelling Kyiv is the epitome of credible sources while the colonial spelling Kiev either signifies potentially distorted and chauvinistic sources or betrays the writer’s imperial or outdated paradigm and framework,” he added.

Transliteration is often a subject of disagreement among scholars.

“Transliteration is arbitrary,” noted Amelia Glaser, associate professor of Russian and comparative literature at University of California San Diego, where she is also the Endowed Chair in Judaic Studies.

“The best rule of thumb is always to see what the person or government in question chooses to use,” she said. When we’re dealing with a country trying to take over another country in an unprovoked invasion, using the Ukrainian transliteration when possible can be an act of solidarity.”

Interestingly, the transliteration of names of individuals seem to be less of a fiery concern for linguists than the transliteration of names of cities, and less grating of a question than “Ukraine” versus “the Ukraine,” which apparently originated from the “imperfect knowledge of English” of Ukrainian scholars, according to Andrew Gregorovich, who wrote about this in 1994. concluding that “the use of the definite article in English before the name Ukraine is awkward, incorrect and superfluous.”

As for the Jewish President of Ukraine, whose bravery is moving people around the world, “the spelling Zelenskyy is neither here nor there. Zelensky is the conventional spelling,” Shevchuk said.

“Spelling of a person’s name is more arbitrary, but transliteration is meant to reflect the way it should be pronounced,” said Glaser. “So in Ukrainian ‘Zelensky(y)(i)(j)’ has that ‘lynx’ sound at the end, which is different from the Russian ‘Zelenskii,’ which has a pure ‘ee’ sound at the end. It’s subtle, but reflects the official language of Ukraine.”

“I tend to use Zelensky, because it’s simple, easy to remember and very commonly used, but I do pronounce it in the Ukrainian way,” Glaser said.

Zelenskyy has given addresses in both Ukrainian and Russian and has used his language skills and experience on the stage to make direct appeals to everyday people and political leaders — with tremendously inspiring results. And on the ground, American reporters with language skills have used them to maneuver around Ukraine at an extremely dangerous moment.

It’s worth noting that The Washington Post’s Moscow correspondent, Isabelle Khurshudyan, whose family is from Odessa and who is fluent in Russian, recently turned to Yiddish to describe what has most surprised her about what’s happening in Ukraine.

“I think it would be the resilience and chutzpah of Ukrainians,” Khurshudyan said, using the all-time favorite Yiddish word of many speakers and non-speakers. “Whether it’s older women who are spending their time weaving camouflage nets for military equipment or all of these people who are volunteering for the Civilian Defense Force. You see lines to the blood bank of 3,000 people, and they’re waiting in line while there’s shelling ongoing. People are finding their own ways to mobilize. And I think that’s something Russia underestimated — what the civilian resistance would really look like.”

For those around the world looking for ways to mobilize support of Ukraine, spelling cities under siege in the Ukrainian way, and understanding why it matters, is a basic first step.

Aviya Kushner is The Forward’s language columnist and the author of “Wolf Lamb Bomb” (Orison Books) and “The Grammar of God” (Spiegel & Grau). Follow her on Twitter @AviyaKushner

Kyiv or Kiev? Zelensky or Zelenskyy? For Ukraine, spelling is a political act