Cartoonist Liana Finck on rewriting Genesis, God as a woman and why Abraham feels like a Philip Roth character 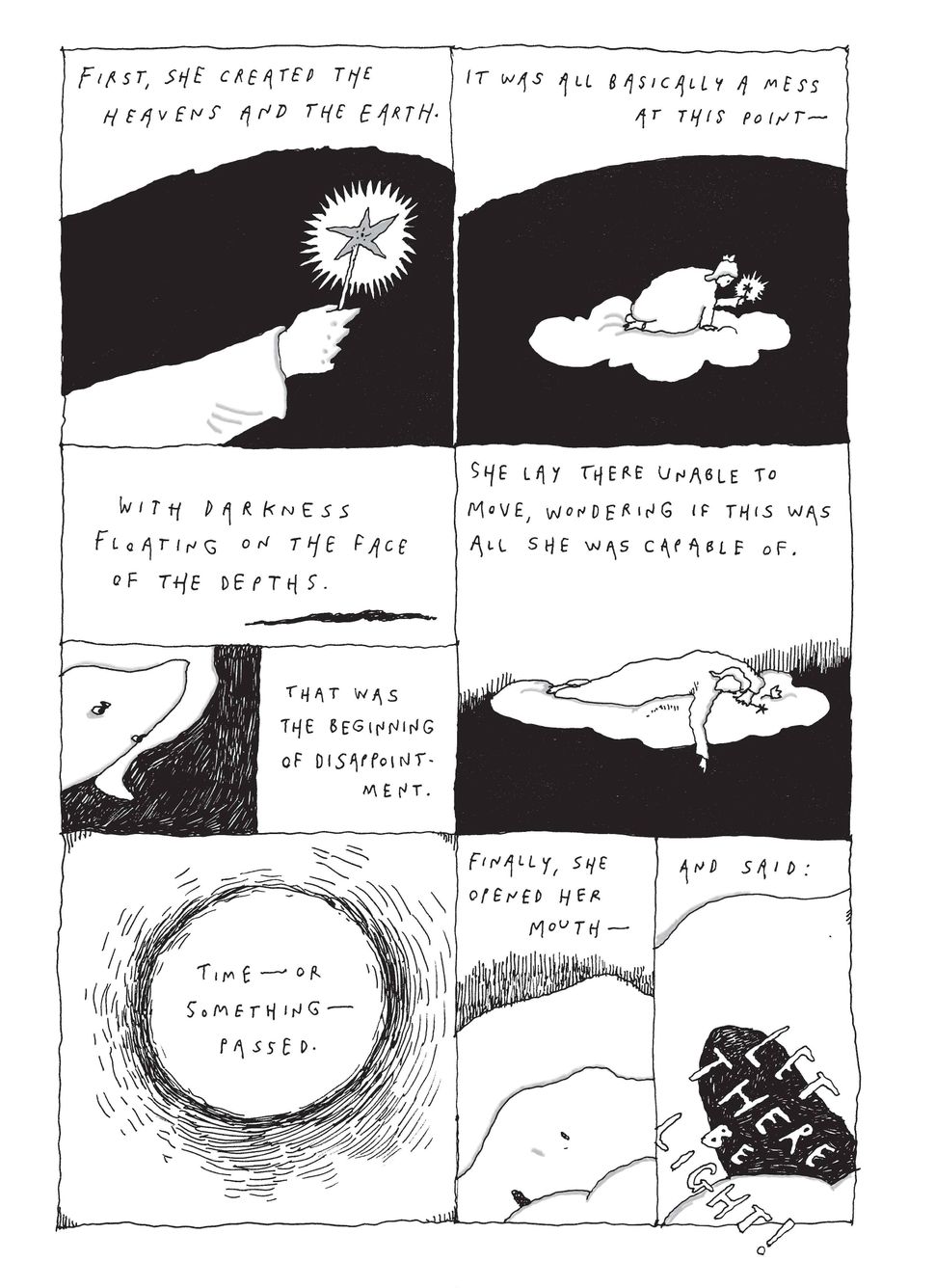 In Liana Finck’s Book of Genesis, Lilith is the Serpent, Joseph wears a merman tail and God is a woman.

The New Yorker cartoonist’s latest graphic novel, “Let There Be Light: The Real Story of Her Creation,” envisages the Almighty as a work in progress. She is lonely, so She creates people. In a moment of self-loathing, She destroys the world, but spares Noah, Her “first love.” Artistically frustrated, She gifts New York to a painter named Abram so he can make great works, ghosts him for two decades, scolds him for Her own poor communication and, in a sudden pivot, blesses him with a son.

Later, mature enough to be a laissez faire deity, She’ll appear to Joseph in a future, undersea Egypt, but only through dreams. For fear of not being taken seriously, She only tells a select few people She’s a woman.

Finck’s retelling of the Bible’s first book foregrounds a feminine creator while addressing the many ways women characters are sidelined, with only Lilith – God’s original co-creation alongside Adam – taking much of an interest in them.

“Noah did have a wife,” the reader is told of that unnamed character, “but she was only decorative.” Leah, Jacob’s least favorite wife, isn’t a person in Finck’s panels, but a golem-like idol worshiped by Laban. Women’s bizarre erasure in the genealogy of the “Begats,” is underscored, with Methusala and Seth – true to the source – “begetting” their children solo via their chests, mouths and armpits. (Finck, who found Genesis 10 a slog, had the most fun drawing this biblical body horror.)

Finck, a longtime Forward contributor whose previous books include a riff on the Forward’s “Bintel Brief” column and the graphic memoir “Passing For Human,” revisited her memories of Jewish day school for the book, while bundling in some footnotes on Hebrew etymology and Kabbalistic concepts. Jumping between times and tenses, her Genesis overfloweth with new ideas on our oldest stories. It will take another, gifted graphic artist to draw the Midrash.

I spoke with Finck, who was out walking “dog and baby,” about her process, inspiration and why Abraham’s story feels like a Philip Roth novel. The following conversation has been edited for length and clarity.

PJ Grisar: Forgive me for the groaner, but what was the genesis of this book? 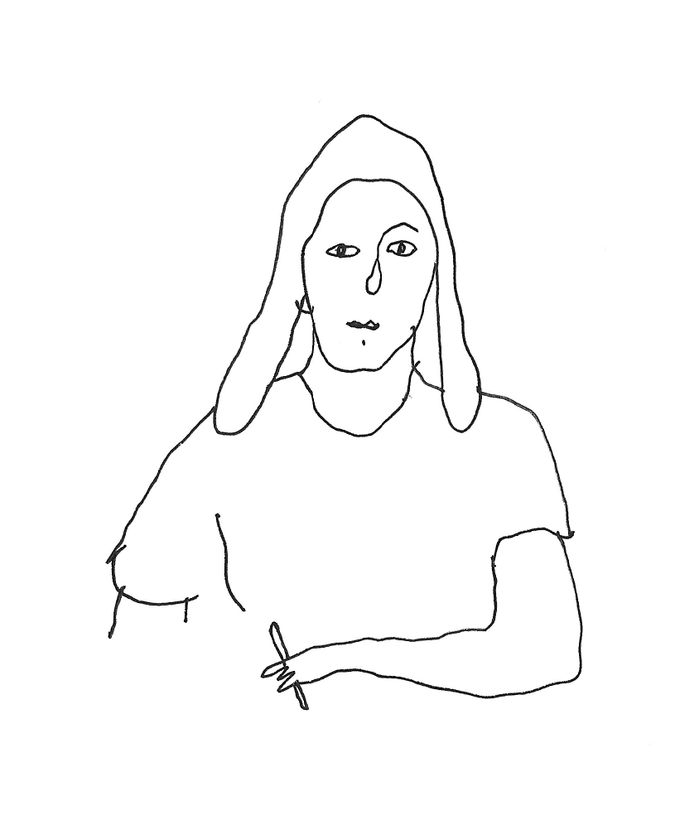 Liana Fick: The genesis of this book is actually The Forward. I made a piece, a kind of literal adaptation — well, literal words and wilder images – for a regular feature I was doing in The Forward. I think it started at the very beginning and it ended with the apple and God closing up the garden.

Was God a woman in that?

God was a woman. I don’t remember why I made God a woman. I always think of artists as God and God as an artist, which explains that I’m not that religious. This isn’t to say that I think artists are like, very, very powerful — it’s to say that I don’t think God is very powerful. I also made that piece as kind of a love poem for someone I had a crush on, which explains why that didn’t work. It was like showing myself as God and him as Adam. Inadvertently really not a good love poem.

That’s such a part of this though. It ends with Her saying “We twist ourselves in knots in the desire to be liked by men.” It’s interesting to imagine the relationship between God and creation in that sort of way.

But She has such a big ego through it, even though She’s making Herself into a worm to try to impress these men, She still thinks of Herself as God and still thinks Herself as way more important than these men, which I think is probably how I always was, deep down. 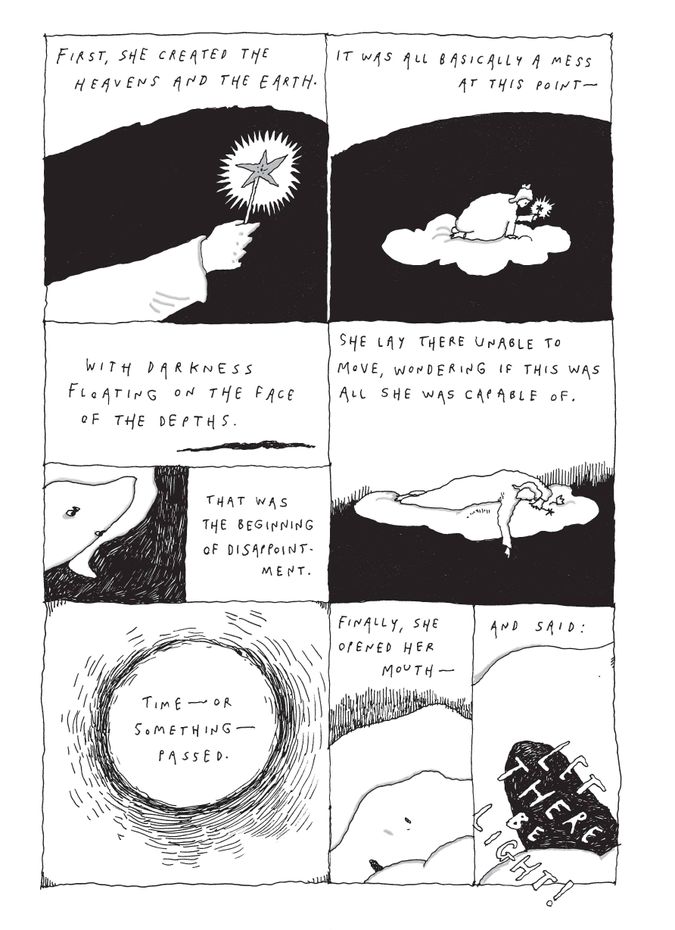 One thing that’s exciting about this book is that there are these major shifts. We start in the past, then we come to the present and we’re in future tense. How did you end up making that choice?

That choice came late as I was writing. When I started working, I didn’t really understand how many different vibes the book of Genesis has within it. I felt like it was — I don’t know if this is true – but I felt like it was three different books written at three different times by three different writers. And so the early early creation stories feel so ancient and are kind of like the Epic of Gilgamesh. And they suited that kind of innocent girl God character I made. And then the story of Abraham and Isaac are so different and they kind of remind me of like a Philip Roth novel or something. There’s this like powerful guy character, and we’re supposed to be interested in everything he does, and all his real estate dealings and his children. Abraham’s the one I had the most trouble with – it just feels like a book I wouldn’t read necessarily. But I love Jacob and Joseph, they’re kind of sparkly. They remind me of “Middlemarch.” I know, “Middlemarch” was written before Philip Roth, but somehow it feels more current to me and so it did feel like past, present and future.

You ended up making Abraham an artist — someone reading this might be like, “she’s seeing something of herself here.”

I thought of Abraham as an artist like a Philip Roth character, like a very single-minded male genius writer, who I relate to because I always wanted to be an artist. [Abraham] was the artist character I was brought up with, but also could never quite be.

There are moments here where you’re having fun with translation, you know, the “creeping things” in the creation story become “creepy-crawlies.” Adam just being called “Man,” because, well, Adam just means “Man” or “Human.” What translations were you using?

It’s the one I had in high school [The Rosenbaum and Silbermann Penteteuch]. And I was reading in Hebrew. And then I read in English, the Robert Alter translation, which I just love.

What are you up to?

I’m actually just doing the Parsha, so I’m in Leviticus now. [Reader: I am current, this interview took place a few weeks ago.]

Oh, cool. What’s happening in there?

Not a whole lot. You know, it’s not exactly narratively busy. But actually, this one just had some narrative. I think two of Aaron’s sons were killed, because they lit some incense they weren’t supposed to. Were you looking at some of Alter’s glosses and footnotes on his word choices — was that informing some of the ways you were writing things?

I consciously didn’t do a ton of research on this book. There’s too much. I find that when I want to do something right I get overwhelmed and I trick myself into not being a perfectionist. I write with a lot of bravado. Diving into biblical scholarship is many lifetimes worth of stuff. I just relied on what I learned, like 20 years ago in school. 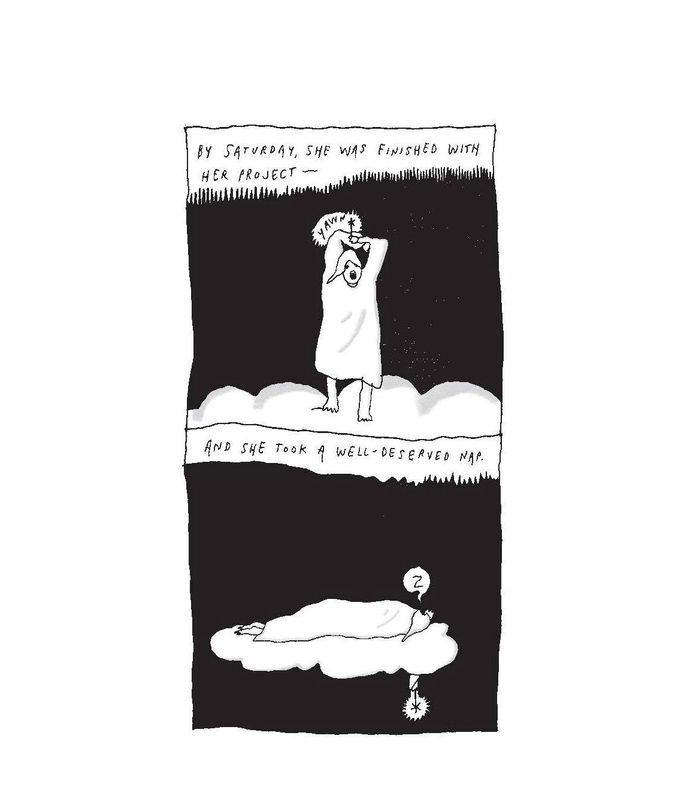 What do you hope people get out of reading the stories this way — or how did imagining them like this change the way you moved through the story?

I mean, you’ve created life since then!

I know. I was thinking very hard about planning to have a kid while I was working on it, so there’s a lot of that in there.

Has your way of working with this book changed at all? I know you mention that you had some iPad brushes that you borrowed for the cover.

I did the cover in like a moment of experimenting with an iPad painting app. I think there’s a few things that I figured out are my style with graphic novels that I’m trying to stick to — like this grid of square boxes. I draw the grid in dots and then I free-draw the lines between them. I find that whenever I try to write in a certain voice, the pen or writing implement I use has to match the voice. I planned to work really only in one style in this book to give myself more brain space for the story, but I ended up having to really experiment with style because the voice changed so much in the three different stories. For Abraham I used a pencil and a lot of shading. I think deep deep deep down I’m really more comfortable just drawing all over the page and not in these comic styles. 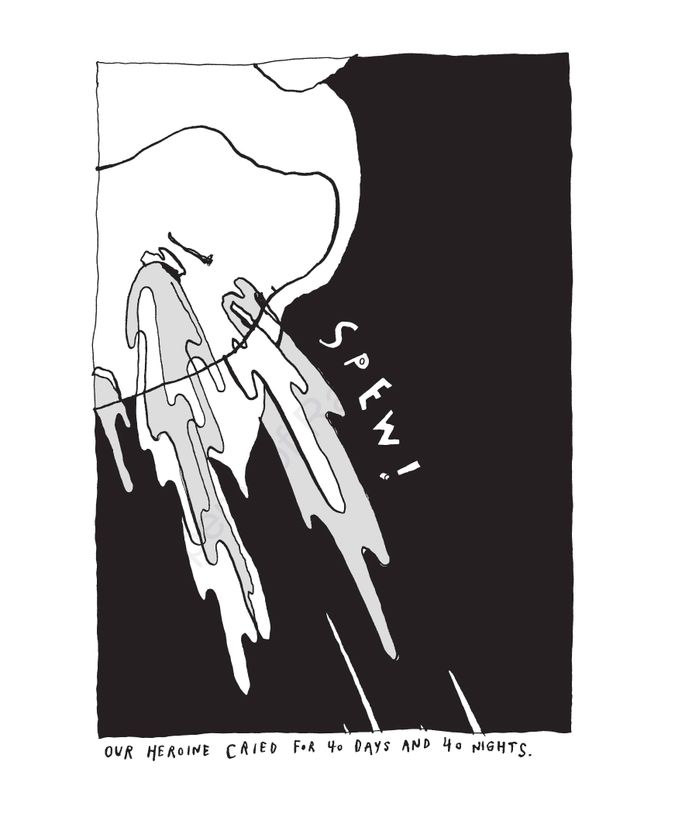 Can we expect Exodus next?

Exodus. First I’ll have to read it and then maybe I’ll write it. They’re very infused for me with what grade I was in when we learned them, so yeah, creation feels like first grade. But then my school was very slow. So by the time we read Exodus, I wanna say I was in 12th grade. And it was just kind of like school. Exodus just feels like school.

There’s that epigraph by Jamaica Kincaid you use: “When I encountered the book of Genesis, I immediately understood it to be a book for children.” Maybe that’s why that resonated with you.

Yeah, yeah, exactly. I never really thought about that. But like I think that’s why that is the child’s at the beginning, because I was a child when I learned that story.

Cartoonist Liana Finck on rewriting Genesis, God as a woman and why Abraham feels like a Philip Roth character