How Jewish is Moon Knight anyway? Depends whether you’re reading it or watching it on Disney. 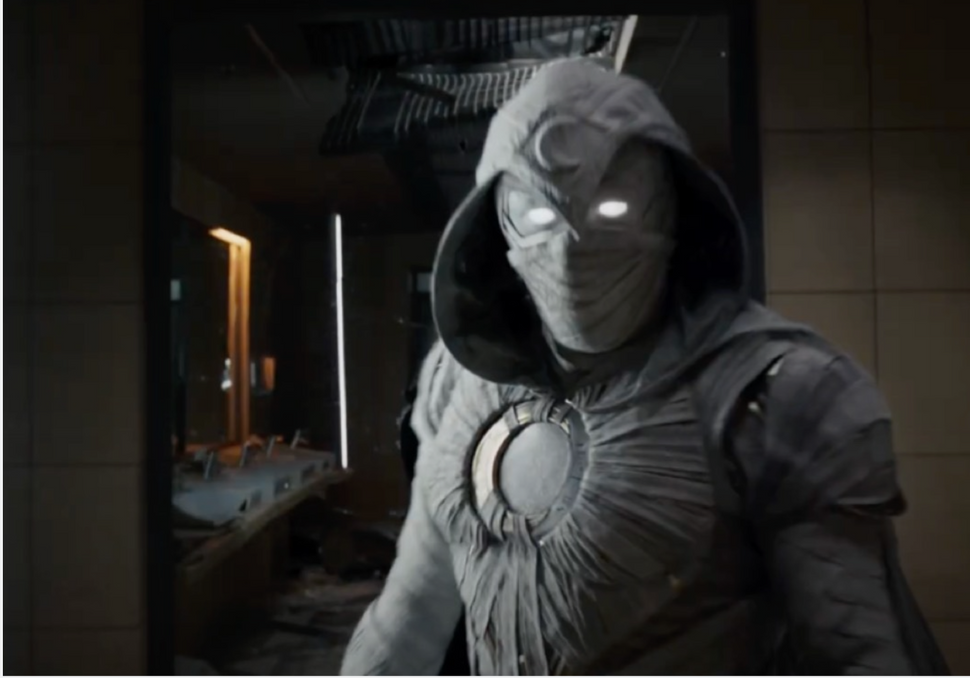 Marvel’s newest superhero offering, the six-part “Moon Knight” miniseries on Disney+, stars Oscar Isaac, a big-name actor, as the fairly obscure comics character. On the face of it, it’s an opportunity for Isaac to define the role, like Wesley Snipes did with Blade and Robert Downey Jr. with Iron Man. But Moon Knight, as deep cut as he is, is known for two things: he’s mentally ill and he’s Jewish. And Isaac is neither.

This has caused a bit of a hubbub since news of the casting broke last May. Most of it has focused on his mental illness, whether it’ll be portrayed genuinely and respectfully and why that matters, but some has been about his Jewishness. Will he be Jewish in the show? And should a non-Jew be playing a character whose Judaism is so central to his story?

These are legitimate questions, particularly since “Jewface” became cause célèbre after comedian Sarah Silverman noted in her podcast last September that positive, innately Jewish roles are usually played by gentiles.

But is this really an issue? Does it matter if a masked superhero is Jewish or not, or if the actor is?

Moon Knight first appeared in 1975’s Werewolf by Night #32, created by writer Doug Moench and artist Don Perlin. In 1980 he got his own comic, by Moench and Bill Sienkiewicz, a hardboiled noir series with a supernatural twist.

He got a simple and cool backstory: mercenary Marc Spector grows a conscience and gets killed for it. Left in the Egyptian desert, he’s resurrected, or at least believes he is, by Khonshu, the ancient Egyptian god of the moon. He decides to dedicate his life to protecting the innocent, adopting the guise of Moon Knight. And when he returns to New York he develops two more secret identities, brash cabbie Jake Lockley and suave billionaire Steven Grant.

In many ways, Moon Knight was a Batman knockoff who could be used in ways that the high-profile Dark Knight couldn’t, but he grew into his own. His different identities, which early on were conscious acts, gradually came into sharper focus as “schizophrenic” personalities.

By the early aughts he was formally diagnosed with dissociative identity disorder, or DID (previously called multiple personality disorder), defined as “an involuntary escape from reality characterized by a disconnection between thoughts, identity, consciousness and memory.” The portrayal hasn’t always been thoughtful, but it’s evolved with the times, same as his Jewish background.

Moon Knight is one of the earliest openly Jewish superheroes (the first being DC’s Seraph, created in 1977), but it wasn’t intentional. Moench named Marc Spector after an acquaintance, not realizing it was a Jewish name.

It wasn’t until the last two issues of the series, #37–38 in 1984, that his Judaism was explored. Moench had left the title, replaced with newcomer Alan Zelenetz — who’d go on to become a rabbi, yeshiva principal, director of curriculum development at Columbia University, and founding editor of an academic journal, among other things — who made Spector the son of a Chicago rabbi, a Holocaust survivor from Czechoslovakia.

It was their fraught relationship, and Spector’s shame in his father for his pacifism in the face of antisemitic violence in their neighborhood, that drove him to become a boxer, then a Marine and then a mercenary, which ultimately led him to become Moon Knight. It changed the meaning of the character; he wasn’t a superhero who was also Jewish, he was a superhero because he was Jewish.

In the years since, his Jewishness progressively moved to the foreground. His comics have explored his heritage and faith, ironic service of a pagan Egyptian deity, and assimilation — Marc Spector is Jewish but Steven Grant isn’t, making the personal schism also a cultural one.

In the recent Moon Knight Vol. 9 #5 (January 2022), Spector discusses his father and faith during a therapy session with his ostensibly Jewish psychiatrist, Andrea Sterman. He’s always resented God, he explains, for his indifference to the suffering of the Jewish people throughout history, and he held his father’s commitment to the Jewish ethic of nonviolent perseverance (it’s not, that’s a common misconception) with contempt.

The story created something of a controversy online, arguing that it evokes a harmful stereotype of Jews as passive victims. Partly that’s just a misunderstanding of how fiction works; it’s not the writer’s perspective, it’s the character’s. But it does shed light on the problematic, and persistent, misrepresentation of Jews in the media as timid, docile, hopelessly cerebral, noble lambs to the slaughter in need of non-Jewish saviors.

In the “Moon Knight” show, that’s pretty much what Steven Grant is, even though he’s not Jewish. He’s a nebbish, tousled-haired vegan, like a more jittery Clark Kent. And rather than a wealthy stock trader, he works the counter at a museum gift shop. It’s an interesting reversal, the gentile persona being the schlemiel-schlimazel and the Jewish one, Spector, the confident and capable man of action. In a way, it also mirrors the dichotomy of the Jewish image, the anxious exilic “Golus Yid” and the battle-hardened Israeli.

Executive producer Grant Curtis and Isaac, who’s co-producing, stressed that they took Moon Knight’s mental illness seriously, bringing in consultants to ensure a “very reverential and very respectful” depiction. (It can be done — “Iron Man 3” and “WandaVision” both used psychological trauma for dramatic and even comedic effect without feeling exploitive or degrading — but there’s only so much that can be expected of a superhero show.) How they approached the character’s Jewishness is harder to say.

At least in the first four episodes provided to reviewers, there’s no reference to his Jewish background (except for a brief glimpse of a Star of David necklace at end of the second episode). But the show is a psychological thriller, like “Memento” (though far less gritty and violent, despite how it’s been touted), and his origins are revealed piecemeal. Lead writer Jeremy Slater tweeted in March, though, that “Preserving the character’s Jewish faith was important to our entire writing team. It’s something that definitely gets explored in later episodes.”

Reportedly, Marvel originally looked to cast a Jewish “Zac Efron-type,” preferably of Israeli descent, and Daveed Diggs and Nick Kroll were both rumored to be in consideration. Diggs especially would have made a welcome addition to the rare representation of Jews of color, but the role ended up going to the marquee name Oscar Isaac.

Isaac is Guatemalan-Cuban and Christian (though he says “Isaac” is a Jewish surname from his father’s side), which leads to the question of whether Marvel should have stuck to casting a Jew in the role. Given Moon Knight’s Egyptian backstory, Marvel chose an Egyptian director, Mohamed Diab, to helm the show, as well as an Egyptian female lead, editor, composer and others, and had an Egyptologist on set. Diab has also publicly criticized the portrayal of Egyptians in other superhero movies like “Wonder Woman 1984” and the upcoming “Black Adam.” So how come ensuring the Jewish lead is played by a Jew was less important?

When it comes to Jewish representation on screen, comic book movies have a checkered history. Marvel in particular, despite plenty of Jewish figures behind and in front of the camera, has been accused of whitewashing Jewish (and other) characters.

Take 2015’s “Avengers: Age of Ultron,” which cast the blonde Elizabeth Olsen as Wanda Maximoff, the Scarlet Witch, who’s paternally Jewish and maternally Romani in the comics. Worse, her parents are Holocaust survivors, and in the movie she and her brother Pietro join Hydra, a Nazi organization, and volunteer to be experimented upon by Baron Strucker, a Nazi war criminal.

But should Jewish roles, or at least essentially Jewish ones, only be played by Jewish actors? Both Andrew Garfield, who’s played Spider-Man in three movies and is Jewish (and who confirmed that Spidey is, in fact, Jewish) and Sir Ian McKellen, who’s played Magneto in four movies and isn’t Jewish, don’t think so. “If someone who’s not Jewish can’t play Jewish, does someone who’s Jewish play someone who’s not Jewish?” McKellen asked in a BBC interview. “If we only let people play exactly who they are, it’ll be the death of imagination,” Garfield said in another.

The thing about representation, though, is that it’s not just reflective, it’s performative. It shapes perception, and consequently attitudes. If Sarah Silverman is right and Jewish actors are mostly given blatantly “Jewy” roles — neurotic, comedic, intellectual, etc. — and gentile actors play most of the positive, less-obviously-Jewish roles, then it perpetuates stereotyping, which becomes harmful in other spheres like sociopolitics.

In an era of corrective minority representation, if other groups are given credence and handled with sensitivity but not Jews, it denies Jews recognition as a prejudiced minority and becomes an act of identity erasure.

It remains to be seen how Moon Knight’s Judaism plays out in the show, but it’s important that it does. He may not be as famous as Magneto or Harley Quinn, but his Jewishness is integral to his character. It informs his perspective and actions. In many ways he became Moon Knight in reaction to his Jewishness.

Zelenetz, for his part, thinks little of it. He told The Forward, “If he’s not Jewish because there’s a good artistic reason he’s not Jewish, that’s perfectly OK. I don’t care.” He did, however, take aim at the oversensitivity of the issue. “I can smell blood in the water already!”

Still, in a show where ancient Egyptian gods use terms like “safe space,” they can make some room to explore Moon Knight’s Jewishness.

How Jewish is Moon Knight anyway? Depends whether you’re reading it or watching it on Disney.