13-year-old Zoya Cherkassky couldn’t look away from the window of her apartment in Kiev. The winter of 1990 was snowy and cold, yet even so, people were waiting in a bread line that stretched out the door of the shop across the street.

“It was weird, because there were lines during that period, but not for bread,” the Ukrainian-born Cherkassky, who immigrated to Israel in 1991, said in an interview. “I felt like I was witnessing something important, a symbol of that era, of life changing and falling apart. I drew the line, thinking to myself that I’d use the drawing for something, someday.”

25 years later, Cherkassky used that sketch as the basis of an oil painting, “Bread” (2015). Both sketch and painting are currently on view at Cherkassky’s first solo exhibition at the Israel Museum in Jerusalem, titled “Pravda.” 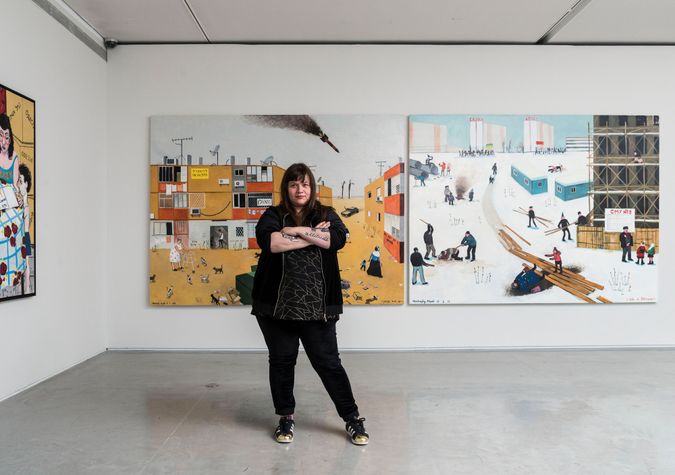 Pravda, which translates to “truth” in Russian, was the name of the Communist Party’s official newspaper, which fed its readers a politically expedient alternative reality in the former Soviet Union. In a tongue-in-cheek reference to the Pravda of her youth, Cherkassky’s colorful, large-scale paintings offer an honest look at the experiences of Russian immigrants in Israel, challenging the myth of seamless integration in the Jewish homeland.

The exhibition is saved from bitterness by Cherkassky’s idiosyncratic brand of humor. Amitai Mendelsohn, Curator of Israeli Art at the Israel Museum and curator of “Pravda,” said in an email interview that “Zoya [deals with the Aliyah experience] in a unique way that combines a sense of humor with stark and direct realism, so her work is unique in the Israeli art landscape.”

The hardships faced by Soviet Jews did not dissipate the moment they arrived on the El Al flights that shuttled them to their new country. (Cherkassky’s experience of her own arrival is memorialized in her painting “New Victims” (2016), in which her adolescent self is the first in line to disembark a plane newly landed in Israel.) 900,000 citizens of the former Soviet Union came to Israel in the 1990s, the greatest immigration influx the country had experienced since the mid-1950s. 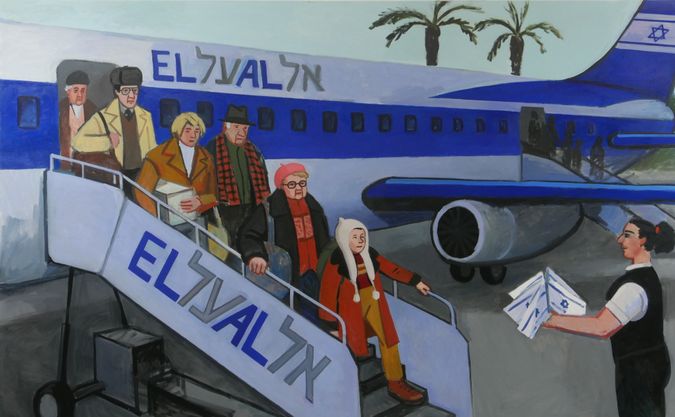 Israel had difficulty absorbing such a large number of newcomers all at once; the group was the equivalent of 20 percent of the country’s population prior to their arrival. It was a challenge to secure adequate housing and employment, and makeshift trailer parks were set up by the Israeli government. The timing of the largest waves of immigration from the former Soviet Union also coincided with the first Gulf War, a period during which Israel was under frequent attack from Iraqi scud missiles and threatened by the potential use of chemical weapons. (“The Chemical Warfare” (2016) depicts a family of four wearing gas masks and playing cards during the then-ubiquitous experience of spending hours in bomb shelters.)

Cherkassky depicts the confrontations between new immigrants from former Soviet countries and Israeli definitions of Judaism in paintings such as “The Circumcision of Uncle Yasha” (2013), in which a middle-aged man claws at an operating table while undergoing a horrifying late-in-life circumcision. In another painting, “Rabbi’s Deliquium” (2016), a rabbi inspects a seemingly kosher household in which the dining table is set for Shabbat, only to find a cooking pot with a pig’s snout peeking out in the refrigerator. (In a small culinary victory for Jews of the former Soviet Union, pork — a dietary staple from home — eventually did make its way into the formerly kosher-centric Israeli kitchen in secular centers such as Tel Aviv.

Cherkassky is well-equipped to tell this story. Her own Jewish descent was questioned when she moved to Israel — apparently, her maternal grandfather was Jewish, but her maternal grandmother was not — and her story is a thread in the fabric of the collective immigration experience of Soviet Jewry. She is also a respected artist in the Israeli art scene, having participated in several group and solo shows in Israel, Berlin and Moscow. Her work has been collected by premier institutions such as the Jewish Museum in New York, Tel Aviv Museum of Art, and Jerusalem’s Israel Museum. 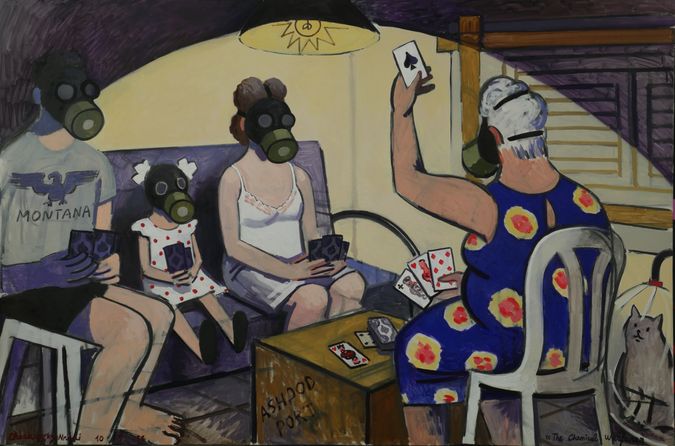 It has been a generation since the first wave of Soviet immigrants first came to Israel in the early 1990s. “The 1.5 generation, a sociological term to define immigrants raised as children in one culture and then planted in another, has come of age,” said Lily Galili, a former Haaretz correspondent and expert on Soviet immigration to Israel who co-authored “The Million That Changed the Middle East” (2013) with Roman Bronfman, in an interview.

“There are more than 200,000 of this age group,” Galili said. “They are the group to write the narrative of this immigration. They, as a collective, have a critical view of both themselves and Israeli society and the courage to express it.”

Distance in both geography and time has aided Cherkassky, who began painting this series while living in Berlin in 2009, in addressing her difficult memories of immigration. “Twenty-five years seems like a reasonable amount of time to be able to look back and try to understand what exactly happened, and what the ramifications are,” Cherkassky said in an interview.

Israel’s Russian community has made strides integrating within Israeli society and the country’s political landscape, but still combats unkind stereotypes. A report published by the Israeli Central Bureau of Statistics in 2015, on the occasion of the 25th anniversary of the Russian Aliyah, seems to indicate that many of those who immigrated in the early 1990s live insular existences. Roughly a quarter of the people who had immigrated to Israel as of 1990, the report stated, in 2015 reported low or nonexistent conversational Hebrew levels. Around half of those polled stated that their close friends were also from the former Soviet Union.

While Jews of the former Soviet Union underwent a challenging Aliyah experience — confronted, all at once, with a war, challenges to their religious identity and difficulty finding housing and employment — Mendelsohn feels that “Pravda” speaks broadly to the history of a country of immigrants.

“The exhibition is very relevant to the generation that came from the former Soviet Union in the 1990s, and I think it is relevant to any Israeli,” Mendelsohn wrote in an email. “Almost every Israeli has experienced, either directly or indirectly (through his or her parents, or the preceding generation), the immigration experience. That’s why this exhibition is specific and personal, yet also collective.”