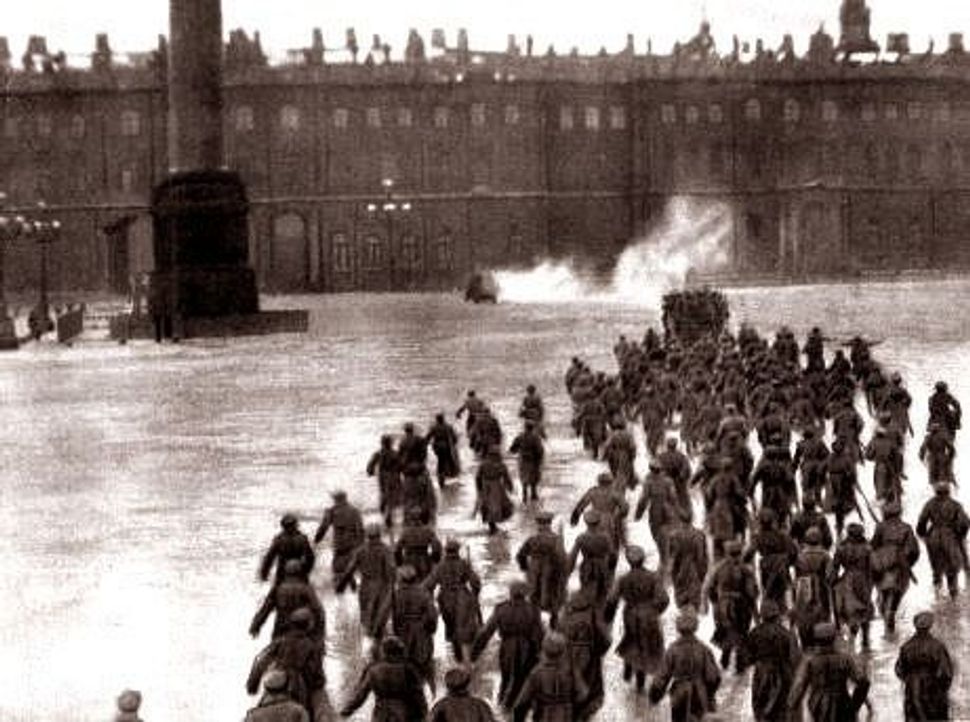 Despite its origins in the work of the Jewish Karl Marx, and its early Soviet Jewish advocates, communism never served the Jewish people particularly well.

Less than two decades after the Russian Revolution, Josef Stalin’s Great Purge made a particular — if unofficial — target of Jews. One decade after the 1938 end of the Great Purge, the state of Israel was established, and Stalin’s policies became determinedly anti-Semitic. He attempted to destroy what remained of Jewish culture in the Soviet Union, and ordered many of its most famous proponents killed.

How did it go so wrong, and what did the Soviet Union’s Jews experience along the way?

As The New York Times’s Jason Farago reports, that question forms the core of a new exhibit at the Jewish Museum Vienna. “Comrade. Jew. We Only Wanted Peace On Earth” hints, in its title, at the desperation inherent in early 20th-century Jewish utopianism. Peace on Earth was a long shot. Yet nothing less could assure the Jewish people of protection.

After all, Russia’s czarist regime was anti-Semitic; Jews had suffered pogroms there for nearly a century prior to the Revolution. While Jews had gained new liberty in much of Europe in the 19th century, many were still poor, and the new acceptance of Jews in mainstream society spawned a new upsurge in anti-Semitism. It’s no wonder that socialism had such a draw for so many Jews — shoutout to the first subscribers to the Forward! — or that revolutionaries like Leon Trotsky thought a radical reinvention of the social contract was the only viable path forward.

As Farago writes in The Times, “Comrade. Jew. We Only Wanted Peace On Earth” reflects the extent to which such revolutionaries saw hope in the new vision of the left. “A red flag in the exhibit screams ‘Down with the Tsarist constitution!’ in Yiddish,” Farago writes. “Election banners advocate the Poale Zion, a Jewish party aligned with the Mensheviks. A copy of the Russian newspaper Pravda, edited by the exiled Trotsky (born Lev Davidovich Bronstein) from Vienna, bellows for workers of the world to unite.”

After the Revolution, as a number of Jewish people found themselves in positions of new political power, Jewish artists felt similarly emboldened: It was a golden age for filmmakers like Sergei Eisenstein and Dziga Vertov and artists like El Lissitsky and Marc Chagall. Their work came to reflect the encroaching state terror that shortly followed the Revolution, at the same time that Eastern European Jews, facing the newly insurgent threat of Hitler, looked to communism as a potential salvation. “In 1934, the Austrian painter Friedl Dicker-Brandeis depicted a police interrogation of a left-wing agitator, rendered in sickly greens and yellows, scored with a palette knife,” Farago writes. “A decade later, she would be murdered in Auschwitz.”

The rest is history — almost. Jewish culture was decimated under Stalin, and many Soviet Jews left the U.S.S.R. for Israel in the following decades, especially after the plight of refuseniks captured international attention. The U.S.S.R. collapsed, and it briefly seemed that a new equitability might be found both in Russia and in Eastern Europe.

Yet a new anti-Semitism came to grip Russia, and nationalist and anti-Semitic sentiment have begun to establish a new hold in Europe. As Farago notes, “Comrade. Jew. We Only Wanted Peace On Earth” closes with a screenshot of a Facebook post by Heinz-Christian Strach, Austria’s vice chancellor and head of its ultra-right Freedom Party. In the image included in the post, a plump, hook-nosed banker who meets most every visual anti-Semitic stereotype feasts next an emaciated man identified as “the people,” who has before him only a bone.

Jewish radicals today are unlikely to speak about the lofty goal of peace on Earth; more likely peace in the Middle East, or more specifically an end to the Occupation. Yet the Jewish Museum Vienna’s exhibit reflects a truth not limited to the goals of last century’s revolutionaries: The world is at best ambivalent toward dreams. Ambivalent toward progress, too.