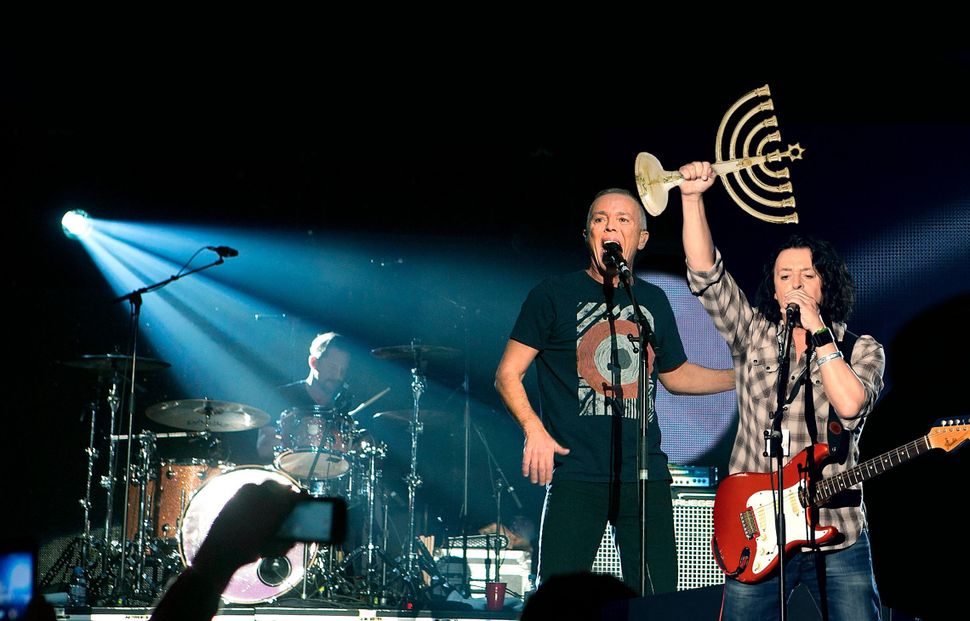 Tears for Fears: Like you’ve never seen them before! Image by Nikki Casey

Tears for Fears are touring the world again — playing Tel Aviv on July 5 — and are promising fans a new album. You already know “Shout” or “Mad World” or any one of those songs that made them one of the most fascinating bands of the ‘80s. You may also know that the songs written by Roland Orzabal and recorded by Orzabal and Curt Smith have been covered in the intervening years by Lorde, Kanye West and a host of reality TV singers.

But you probably don’t know the secret Jewish history of Tears for Fears.

First, and most significantly, is the Jewish band member! Emmanuel “Manny” Elias, a Calcutta-born Jewish drummer, played on the band’s first two albums and, though the band was centrally a duo, Elias (who went on to play for Peter Gabriel and Julian Lennon) was credited as an official member of the band for those albums. Elias, as well as appearing in some of the videos of that era, was a co-writer of the songs “The Way You Are” and “The Working Hour.”

The contemporary history of Tears for Fears begins when Adam Lambert — everyone’s favorite gay Jewish singer — sang a haunting version of “Mad World” on “The Voice.” Though Tears for Fears released the song for the first time in September r1982, Lambert was born on January 29 of that year, almost the same time that Smith and Orzabal were recording “Mad World.”

But “Mad World” comes from a time when Smith and Orzabal were thinking about the psychic traumas of their own childhood. Crucial to the band’s debut album “The Hurting” was a psychoanalytic thinker who was, de facto, their secret third collaborator. The duo didn’t meet Arthur Janov, the charismatic Californian proponent of Primal Scream Therapy, until later, but the lyrics of that album are entirely preoccupied with trying to deal with their own experiences through the lens of Janov’s ideas. Some of the songs like “Ideas as Opiates” and “The Prisoner” even take their titles from chapters in Janov’s book, “Prisoners of Pain.”

Janov, a Jewish psychoanalyst, wrote his doctoral thesis in the early 1960s about Jewish identity — “A Study of the Differences in the Polarities of Jewish Identification.” He believed that we are all suffering from a “Pain” that comes from our repressed childhoods and that we need to expel that “Pain” by revisiting traumatic experiences and “screaming” in response to them. Basically, “Shout, shout, let it all out” as the most famous song from their second album, “Songs From the Big Chair” has it. (That second album was named for the safe psychotherapy chair from the 1976 film “Sybil” based on the 1973 book of the same name by Flora Rheta Schreiber.) 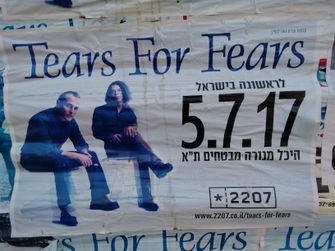 And, as if that’s not enough, they also provide the soundtrack for imaginative Jewish dystopias. Whether it’s Jake Gyllenhaal in “Donnie Darko,” the Nazis taking over America in “Man In The High Castle” or the trailer for Ewan McGregor’s version of Philip Roth’s “American Pastoral” filmmakers have turned to Tears for Fears — in fact to “Mad World.”

Tears for Fears split up in 1991 after which both members pursued their own projects. One of the more interesting ones was a novel by Orzabal, “Sex, Drugs & Opera: There’s Life After Rock ’n’ Roll.” It was occasioned by a request for him to go and sing on a reality show. Although he declined to go on the Celebrity Voice-type show, the novel follows a retired pop singer who agrees to go on such a show to sing opera.

In Roland’s novel the protagonist, Solomon Capri, is Jewish. When quizzed, “Are you a Sephardi or Ashkenazi Jew” he jokes “Oh… a little bit of both.” Probably for Orzabal, for whom the novel is close to autobiographical in certain ways, the Jewishness stands in for the exoticism of his father who was from Paris of Spanish-Basque descent. It seems somehow fitting that from Janov to Capri he identifies, imaginatively, with the people who — from Roth to Lambert — have been creatively linked with him.

Dan Friedman is the executive editor of the Forward. Read his new Tears for Fears ebook.