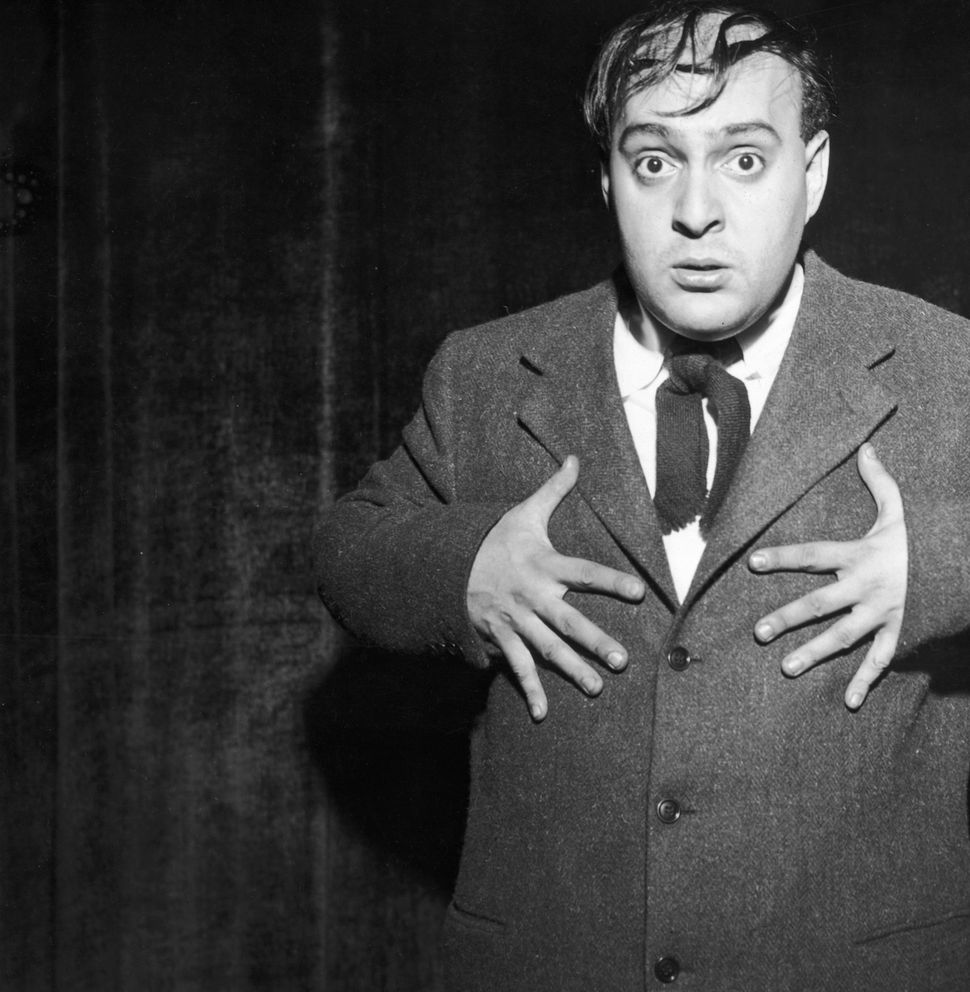 After four years of scouring Youtube for Yiddish-language videos to feature in the Forverts’ weekly cultural supplement Oneg Shabes, I thought that I had pretty much found them all.

Luckily, there are still some treasures out there to be uncovered. Case in point: Rokhl Kafrissen recently posted a video to her blog featuring the actor and comedian Zero Mostel performing the classic Yiddish folksong “With a Needle, Without a Needle.” I had never come across the film, which Kafrissen learned of from her friend, Yiddish actor Shane Baker, because it was described on Youtube as a “Jewish folksong” rather than a Yiddish one. In any case, this unique clip from a television special is fascinating on several levels.

Mostel, best remembered today for having originated the role of Tevye on Broadway in “Fiddler on the Roof” and for his iconic portrayal of cockamamie producer Max Bialystock in the film version of “The Producers,” was also a major radio and theater star in the 1940s. Besides his English-language Broadway roles during that decade, Mostel was also a frequent guest star on Second-Avenue’s Yiddish stage.

Mostel’s career, however, would be derailed several times due to his politics. In 1942, Mostel’s role in the MGM film, “Du Barry Was a Lady,” was truncated because the studio was enraged that he had publicly protested another MGM film, “Tenessee Johnson,” for its glossing over of Andrew Johnson’s racism. Mostel soon found himself blacklisted by every major film studio and did not appear in a major motion picture until the end of the decade. His radio and Broadway career, however, remained largely unaffected.

Following his brief success on the silver screen between 1949-1951, Mostel was again blacklisted, this time over suspicion that he had been a communist. After refusing to answer the House Un-American Activities Committee’s questions about his political beliefs or reveal the names of fellow actors affiliated with the Communist party, Mostel found himself banned from movies, Broadway and radio. Not only was he unable to earn a living during this period, but by the time he was finally able to return to Broadway some eight years later, the American public had nearly forgotten him.

If that weren’t enough, Mostel, just as his career was slowly recovering, was run over in January 1960 by the 86th Street cross-town bus. Fearing gangrene, doctors wanted to immediately amputate his shattered right leg, but Mostel refused. Losing his leg would have effectively meant the end of his stage career, and Mostel felt that it was worth risking death to have a shot at appearing on stage again. He would spend the next four months in the hospital but leave with both his leg and his career intact.

This charming clip of Mostel performing a Yiddish folksong on television in 1962, therefore, acquires additional resonance in the context of Mostel’s life. Having survived a brush with death and coming off nearly a decade of his career being stalled by political repression, what did Mostel decide to perform for a mainstream American TV audience — long before American popular culture had embraced multiculturalism or immigrant history? A Yiddish song. And not just any Yiddish song, but one completely unfamiliar to the wider public.

Two years later, Mostel would debut in the now iconic role of Tevye in “Fiddler on the Roof.” Mostel, who felt that the musical wasn’t Jewish enough, decided to weave in Yiddish words and Jewish melodies to make it more authentic. His performance, along with the more liberal political attitudes of the 1960s, enabled him to become a major star once more.

This rare clip of him singing in Yiddish gives us a sense of what Mostel would have sounded like, if he had ever played Tevye in the mame-loshn.