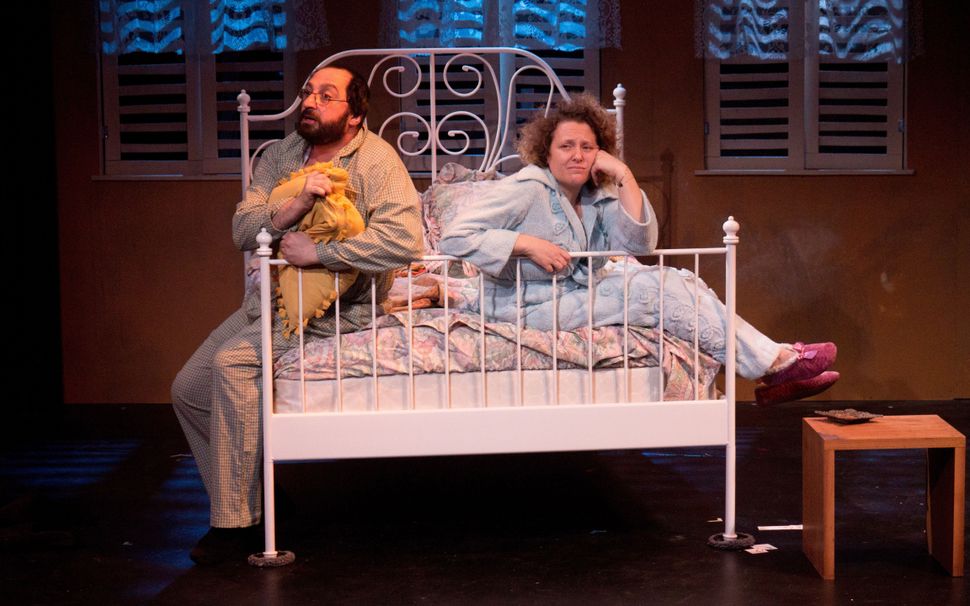 Yona (Gera Sandler) and Leviva (Ronit Sheri-Sandler) Popoch in a Yiddish version of Hanoch Levin’s “The Labor of Life.” Image by Courtesy of New Yiddish Rep

Going to see an intense, absurdist Hebrew play performed in Yiddish for 20 people in Manhattan’s West Village may not be the most esoteric entertainment I’ve enjoyed in my decade at the Forward (though it surely comes close), but explaining its significance presents a challenge.

And yet, just like Hanoch Levin’s “The Labor of Life” (1981) itself, a small drama is a gateway to some important ideas.

So here are three notes towards the significance of the play — recently put on by the New Yiddish Rep as part of two-play, two-language Levin mini-fest at the cozy Rattlestick Theater.

The first, and easiest, reason that we should care about the two plays — “The Labor of Life” and “The Whore From Ohio” — comes with a catch: their author, Hanoch Levin. When he died of cancer in 1999 aged 56, he was by far the most famous and popular playwright in Israel. His absurd, domestic, existentially questioning plays changed Israeli theater and made it what it is now.

David Mandelbaum, the artistic director of New Yiddish Rep who put on the plays, put it concisely in an email to me:

Levin is almost unknown here in the States although he has an international reputation as one of the great post modernists. New York is one of the centers of the Israeli diaspora, and it seems appropriate to offer them, as well as the many Hebrew speaking graduates of Hebrew day schools the opportunity to see a great playwright in the original, beautifully poetic Hebrew.

Plans are already in place to commemorate the 20th anniversary of Levin’s death in 2019. New productions and new translations are poised to appear to celebrate Levin. When I called Guy Ben Aharon head of IsraeliStage to ask him about Levin, he called him “an Israeli Beckett, with Eastern European flair.”

Here’s the catch. In America, theater is an elite hobby of a tiny minority. Perhaps 5% of the population goes to the theater, Ben Aharon guesses. But in Israel, says Ben Aharon, about 40% of the population goes to the theater. It’s a popular medium. So, in his fame, Levin was more “Game of Thrones” than “Death of a Salesman.” But in his oeuvre he was more Samuel Beckett than Steven Spielberg.

OK, so that’s why Levin. Perhaps. And even, maybe, why Levin now; as an augur of next year’s commemorations at a time when the politics of Israel and the English-speaking world seem more designed to make us believe in the absurdity of existence than ever.

One of the people most invested in Levin’s continuing success is his widow, Lilian Barreto. A respected and regular performer on the Israeli stage, she has been assiduous in promoting Levin’s work at home, but has been even more strenuous in her efforts abroad and most specifically in English-speaking countries. I called her on WhatsApp, the afternoon before her own show (“The Lie” by Florian Zeller), to ask her many questions, including whether she was surprised that Levin was being performed in Yiddish.

She admitted that the mameloshn wasn’t how she’d expected Levin to hit Manhattan but said that it actually made sense.

His friend Viteck Tracz always used to joke that Hanoch didn’t write his plays, he just wrote them down in Hebrew from his mother’s Yiddish.

And, while that might be a convenient anecdote, it has a ring of truth. “The Labor of Life” — where an old married couple get up in the middle of the night to argue about marriage, decency and existence — does feel, if not Yiddish, then Central European. When Yona Popoch physically throws his wife Leviva out of bed and stands mock epically on the bed in triumph, there are echoes of Kafka’s portrayal of his father standing frighteningly and ridiculously on his bed in “Letter To His Father.”

Beyond the bizarre existential arguments in an Israeli bedroom and the arrival of an equally odd friend — still in the middle of the night — not much physically happens. The plot is, on the one hand, simple, on the other hand inextricably complex. What is the nature of life and how does family fit into that? Yona suspects he has wasted his life being a decent husband and father and wants to leave. But there’s no clear alternative.

Yiddish is an official language in Sweden, yet not in Israel… Israel tried very hard to suppress Yiddish, and it succeeded… This is a tragedy as overwhelming as the destruction of five million Yiddish speaking Jews. There may be other places to produce Levin in Yiddish — Sweden, for one — but New York seems like a good neutral place for English-speakers to referee a Hebrew versus Yiddish battle.

The last word on Yiddish I leave to Ronit Muszkatblit who directed both these Hebrew and Yiddish versions of “The Labor of Life” for New Yiddish Rep. I asked Ronit — with whom I’ve worked before on a number of cultural projects — why on Earth she was presenting this play in Yiddish.

Yiddish has magic and humor and sarcasm and nostalgia. By taking a contemporary play you break the melodrama of the language and create a contemporary new meaning with… poetic language.

So maybe we do need to hear Israel’s most important playwright, and maybe Yiddish is an appropriate medium. But why Levin? Why, as we play out epic dramas of geopolitical upheaval, do we need a domestic absurdist, an existentialist poet?

I wasn’t first convinced when Ben Aharon told me that Levin’s writing feels to him like an “Eastern European coming to a heatwave. With a tiredness and energy that comes from when it’s really hot outside.” But I think he’s right. It feels European absurd that the Popochs’ friend Gunkel comes in the middle of the night to get his hat and argue. The answer to any problem might be a nice glass of tea. But the Popochs have to fight at night because when morning comes, it comes not with hope, but with dogs and sun and too much heat.

Perhaps it’s the poetry of the language, a sense that the quality of what we say endures. Perhaps it’s the ability of a morbidly domestic couple to engage with the meaning of life. Perhaps it’s just a universalism that peeps out of the Yiddish to remind us that we’re all farting sacks of flesh, capable of beauty only when we embrace our gross mortality.

Or, could it be perhaps, that in the age of tiny individualized screens, we just need theater. Not big musicals on Broadway, but universal pieces of thought to be shared with verve. Works that include the audience and audiences that turn to include one another. To quote Ben Aharon again, “theater does that, breathes these problems with the person next to you.”

In an era where fear is easier to sell than love, and division easier to sow than unity, maybe intimate existential theater performed in a language with no land is what we need. Maybe Hanoch Levin in Yiddish, and his whole living theater is what we need!