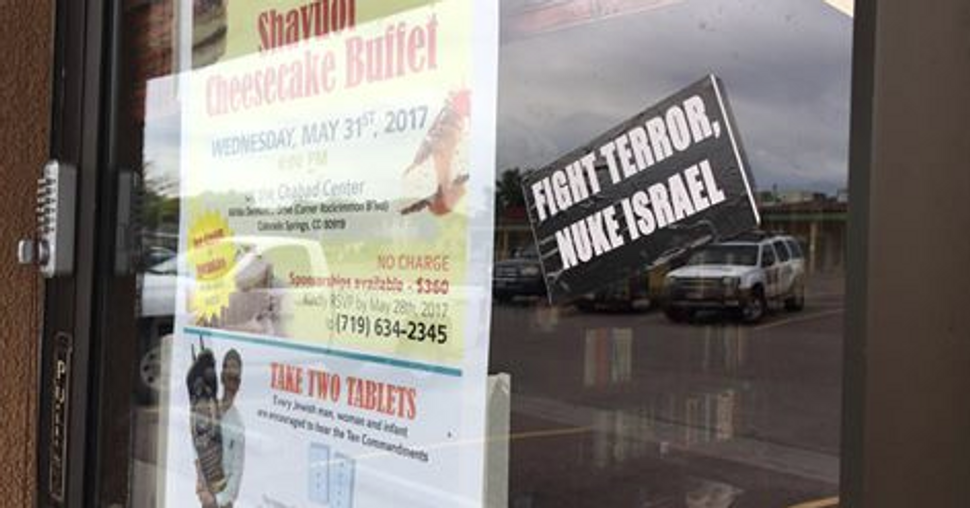 (JTA) — Anti-Semitic messages and a swastika were spray-painted on the building and sign of a synagogue in Colorado Springs, Colorado.

The messages were discovered on Friday morning at the Temple Beit Torah. In addition to the synagogue, nearby cars, homes and buildings also were vandalized, the Colorado Spring Gazette reported.

In addition to a swastika, the words “sig heil,” a misspelling of the Nazi salute sieg heil, was painted on the synagogue’s sign, according to the report.

“America has come so far in diversity and including people, but in the last year, we’ve seen a lot of hate talk about people who don’t fit what they think Americans should look like,” he said.

There has been a significant increase in anti-Semitic acts in Colorado in the past two years, the local office of the Anti-Defamation League told the newspaper.  An unnamed spokesman said that there were 18 acts of anti-Semitism in the area in 2015, and 45 last year.

In June, two men were caught on surveillance video putting a sticker with an anti-Israel message on the door the Chabad Lubavitch of Southern Colorado in Colorado Springs. The message read “Fight terror, nuke Israel.” One of the men took a photo of the sign before leaving the scene.