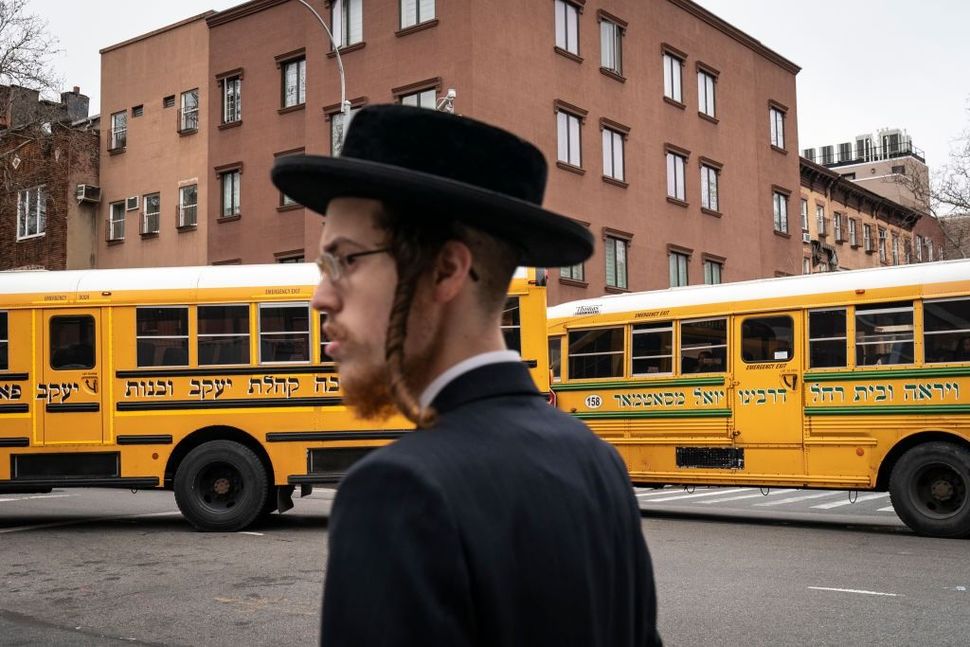 A man walks past school buses near the Yeshiva Kehilath Yakov School in the South Williamsburg neighborhood of Brooklyn, April 9, 2019. New York City has ordered all yeshivas in a heavily Orthodox Jewish section of Brooklyn to exclude from classes all students who aren’t vaccinated against measles, or face fines or possible closure. The order comes amid a recent outbreak of over 285 measles cases in Brooklyn and Queens, most of which have been concentrated in the Orthodox Jewish communities. Image by Drew Angerer/Getty Images

New York’s Metropolitan Transit Authority is investigating a complaint from an Orthodox Jewish man who says he was discriminated against by a bus driver because of New York City’s measles epidemic, which is largely confined to the ultra-Orthodox community.

The man said he was waiting at a bus stop in Brooklyn when the bus driver refused to stop the bus for him. He ran after the bus, and the driver eventually let him in while allegedly covering her face and saying “go in, measles.”

The incident was reported by the United Jewish Organizations of Williamsburg, which is working with the city to curb the measles outbreak by educating the community and encouraging vaccination.

Mayor Bill de Blasio weighed in on the incident. “Anti-Semitic discrimination has no place in our city,” he tweeted. “We’ve reached out to the MTA about this report and will make sure it is thoroughly investigated.”

The city has declared a public health emergency over the measles outbreak, which has seen at least 285 reported cases since October, nearly all among Haredi Jewish children.

Most rabbis and local newspapers have urged their constituents to vaccinate.

But misinformation about the alleged dangers of vaccines, the tacit endorsement of the anti-vaccination by some prominent rabbis, and lack of knowledge about the proper immunization schedule have all contributed to the outbreak’s growth, both in the city and in the heavily-Jewish suburbs of Rockland County.