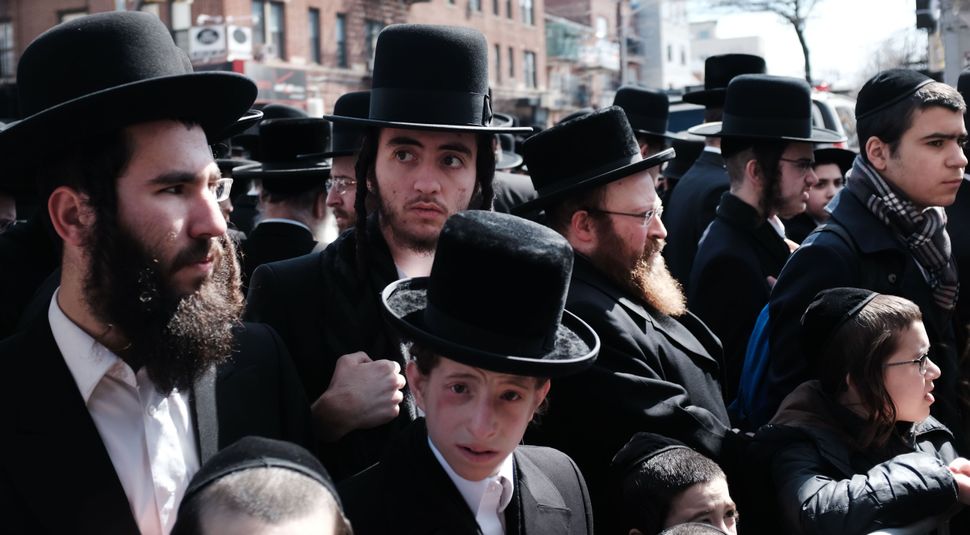 Ultra-Orthodox Jews gather in April 2019 for the funeral of a major rebbe in Borough Park, Brooklyn, one of the neighborhoods that has seen a number of measles cases. Image by Getty

In the popular imagination, ultra-Orthodox Jews shun the modern world. They live and work in tight-knit enclaves in Brooklyn or suburban New York and New Jersey, fiercely protect their autonomy over their religious schools and do not participate in the defining technology of modern times: the Internet.

But while this picture is true for many ultra-Orthodox Jews, it skips over the large number who are surfing the web — and the minority among them who have been using it to fuel their mistrust of vaccines.

A historic measles outbreak is infecting hundreds in ultra-Orthodox communities in Brooklyn and Rockland County, just outside New York City. Over 14,000 unimmunized people in those areas have received the measles vaccine since the beginning of the current outbreak, in early fall 2018. Yet the outbreak is continuing, and experts only expect the rate of infection to quicken with the coming Passover holiday.

Misinformation about the vaccines has spread through the ultra-Orthodox community in several ways: through word-of-mouth, call-in hotlines and slick pamphlets and magazines. One group in particular — Parents Educating & Advocating for Children’s Health, or PEACH — has been particularly aggressive in informing Jews about what it sees as the many dangers and health risks in vaccination. Numerous medical studies have concluded that vaccines, which in a small fraction of cases can cause health complications, are safe and highly effective.

PEACH has been circulating magazines with misinformation about vaccines in Brooklyn for at least five years. One of PEACH’s publications, titled “The Vaccine Safety Handbook: An Informed Parent’s Guide,” recently made the news, bringing an important document of the ultra-Orthodox anti-vaxxer subculture into the national spotlight. It’s been available online at least since November 2017.

The document contains many anti-vaccine arguments and declarations that can be found in secular anti-vaccine media, such as a (debunked) connection between vaccination and being diagnosed with autism, or that measles is a “low-risk” disease. One to two out of every 1,000 measles cases are fatal, according to the Centers for Disease Control and Prevention, and measles can suppress a person’s ability to fight new infections for up to two years after having the disease.

The authors of the “guide” are anonymous; its editor-in-chief is listed pseudonymously as “Leah Singer, MS.”

“Please forgive us for our anonymity,” an introduction reads. “It is not because we don’t believe in our cause. We do! It is because many of us have suffered abuse from fellow community members for questioning the medical authorities and advocating for children’s health.”

Here are a few of the most notable parts of the 40-page magazine.

Perhaps most significantly, the guide cites internationally known ultra-Orthodox rabbis who have either said it is allowable not to vaccinate children before sending them off to yeshiva or who have publicly called the science of vaccines into question.

“These aren’t just local no-name rabbis,” one Hasidic mother, who identified herself as Breindy, told The New York Post. “As soon as I saw those names, I knew I wasn’t going to vaccinate my children.”

One rabbi quoted is Shmuel Kamenetsky, a well-known posek, or decisor of Jewish legal questions, who called vaccines a “hoax” in a 2014 interview.

Yet most major ultra-Orthodox rabbis and institutions have insisted repeatedly that their constituents must vaccinate their children. Despite their pleas, and scorn for ultra-Orthodox anti-vaxxers from the large segment of the community that supports vaccination, some yeshivas have continued to allow unvaccinated children to attend classes.

The guide focuses on the laboratory processes for making vaccines, which can include incubating elements of vaccines in animal blood, cells or organs. (The influenza vaccine, for example, is incubated in chicken eggs.) PEACH’s guide claims that vaccines can contain cells from aborted human, fetuses and blood and organs from unkosher animals like pigs, horses, dogs and monkeys.

Ultra-Orthodox Jews are required to keep strictly kosher, and not eat the products of unkosher meat or animals that have not been slaughtered in a process overseen by a rabbi. Yet vaccines are highly purified before reaching humans, and the major Orthodox kashrut certifiers consider vaccines to be kosher.

Trump features in the history of vaccines

The guide picks and chooses from vaccine history. It notes a meeting between Robert F. Kennedy, Jr. — a vocal critic of vaccines — and President Trump. After the meeting, a spokesperson for Kennedy said that Trump “was exploring the possibility of forming a commission on Autism.” (Plans for the commission were stalled as of November 2017.)

Trump won heavily ultra-Orthodox sections of Brooklyn by a wide margin in the 2016 election, and the community has maintained its support for Trump even has his popularity has waned.

A table comparing immunization schedules for children from 1940, 1980 and 2016 — during which the number of recommended vaccines jumped from two to several dozen — has a box that reads, “Think it’s too many? Beware: Many more vaccines are being developed as you read this!”

Throughout its glossy, high-production value pages, the “guide” features cartoons that make fun of vaccine-obsessed doctors and people who get their children vaccinated without asking too many questions. 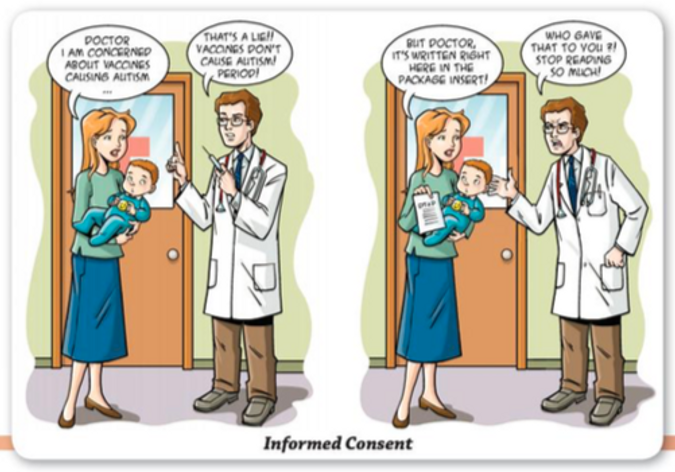 A cartoon from the PEACH guide. Image by PEACH

The guide is filled with ostensible first-person accounts from both ultra-Orthodox Jews and non-Jews alike attesting to situations in which receiving a vaccine damaged a child or an expectant mother. Many stories appear to bolster debunked claims commonly heard from people opposed to vaccination that vaccines cause autism, developmental delays or deformities like microcephaly. (None of these things are associated with vaccination.)

The story of one Mrs. K, a resident of the heavily ultra-Orthodox New Jersey town of Lakewood, describes a doctor’s insistence on vaccinating her 15-month-old daughter leading directly to her being diagnosed with autism.

“The regression clearly started after the vaccines, but the doctor nonetheless denied the connection,” the account reads. “I don’t care what they say, I saw with my own eyes how the vaccines caused her to become autistic.”

The guide contains logically dubious claims about the origins and extent of what it calls “The Autism Epidemic” in the United States, such as noting that autism was an “extremely rare condition” before 1943 — the year the psychiatrist Leo Kanner first introduced the syndrome he called “infantile autism.”

It’s logical to think that the rise in autism diagnoses might be caused by increasingly improved diagnostic techniques. But the guide states that such a claim “insults our intelligence, as anyone who has experience with autism can tell you how obvious the symptoms are — it is not at all difficult to diagnose.” It also repeats unproven claims that autism is caused by exposure to heavy metals like mercury.

Just another way to persecute theJews

The guide frequently takes a conspiratorial tone: _”Isn’t it interesting that…?” One section tries to make a connection between mandatory vaccination and historical persecution of Jewish communities.

“Will the unvaccinated become the new group to be singled out for persecution, as the Jews were in Strasbourg in 1300s?” it reads. “Isn’t it interesting that the current mob attack on the unvaccinated has remarkable similar overtones to the ignorant prejudices which lead to all the historical anti-Jewish pogroms throughout history?” 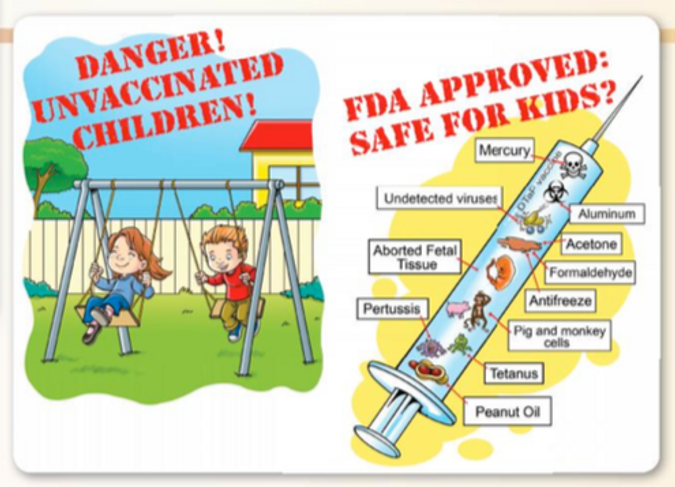 A cartoon from the PEACH guide. Image by PEACH

This kind of propaganda is undeniably available in the Hasidic community, and appears to be growing in popularity. Yet epidemiologists in New York City say that some of the parents whose children they are treating for measles are not so much opposed to vaccination as weary of immunizing their children on the recommended schedule. They fear that too many vaccines at once can lead to decreased sociability.

The approach to vaccination is encouraged by the PEACH guide. One page suggests that parents wanting to minimize harm from vaccines should not begin vaccinating until the child is at least three, only let their children be immunized with one vaccine at a time and give the child nutritional supplements before and after vaccination. None of these practices are recommended by any medical association or government agency, and the CDC states that receiving multiple vaccines at once is safe.

The guide closes with several numbers listed for a hotline managed by PEACH and a reading list of anti-vaccine book titles. In the middle of a Frequently Asked Questions page sits a quote from a notably secular source of wisdom: