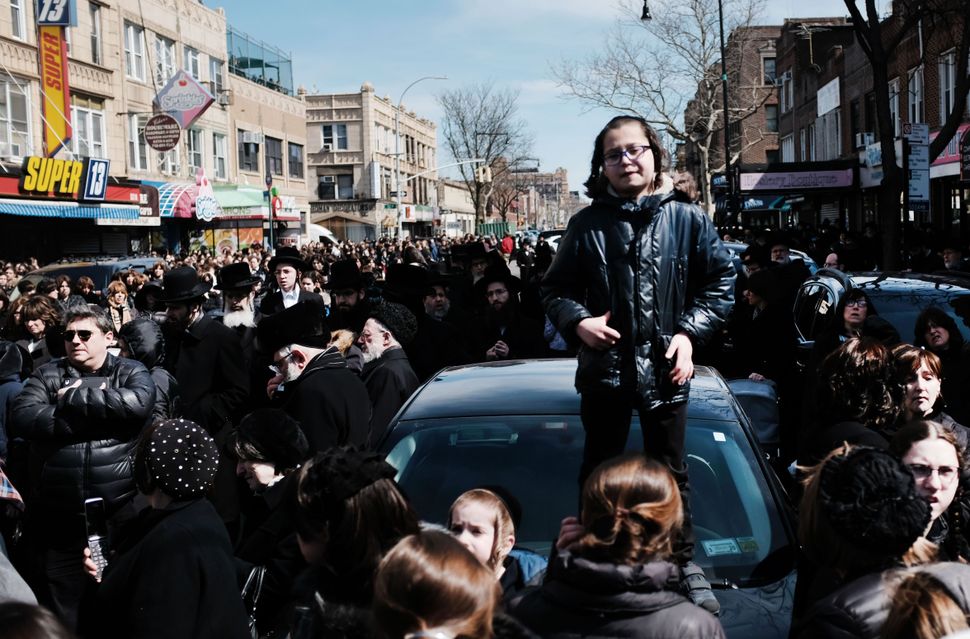 Hasidic Jews attend the funeral of the Skulener rebbe in Boro Park, Brooklyn, one of the neighborhoods hardest hit by the measles outbreak in the borough’s Hasidic community. Image by Getty

The public outcry over measles in New York City is reaching a fever peach after Mayor Bill de Blasio declared a state of emergency in heavily ultra-Orthodox zip codes in Brooklyn on Tuesday, making vaccination mandatory for unimmunized people.

De Blasio said that people who refuse to get vaccinated could face fines.

“This is the epicenter of a measles outbreak that is very, very troubling and must be dealt with immediately,” de Blasio said at a news conference in Williamsburg. De Blasio previously urged the ultra-Orthodox community to vaccinate last month.

There is also a major outbreak ongoing in Rockland County, a suburban county just north of New York City home to tens of thousands of Hasidic Jews. That outbreak has been almost completely confined to the Hasidic community, according to health officials.

Both New York City and Rockland County have undertaken major immunization campaigns since the beginning of the outbreaks in the early fall of 2018. In New York City, over 8,000 people have been immunized.

But health officials and epidemiologists don’t expect the problem to abate. In fact, given the raucous recent holiday of Purim combined with the upcoming celebration of Passover, which is traditionally observed with large, extended family dinners, the experts predict that the rate of infections will increase.

“We expect a bump over the next two months,” Dr. Jennifer Lighter, a pediatric epidemiologist with the New York University Langone hospital system, told the Forward this month. “So, it’s not going anywhere, except worse.”

In nearly all the cases that Lighter has seen, she said, the unimmunized Hasidic individuals are children — upwards of 90% of people receiving the vaccine, according to health officials.

Much of Hasidic opposition to vaccines has been driven by anti-vaccine propaganda, often taking the form of pseudoscientific studies and advice from unaccredited medical professionals. But Lighter said that in many of the cases she has seen, the problem seems to be just as much a lack of education about the proper scheduling of vaccines as a strong mistrust of vaccination generally.

“They just kept delaying the vaccination,” Lighter said, noting that some Hasidic mothers worried about the possible side effects of giving a child too many vaccines in a short period of time.

The problem of the holidays may also lead to infections in areas outside New York City and Rockland County, as ultra-Orthodox Jews frequently travel to relatives’ homes up and down the East Coast, as well as to hotels and other resorts that offer all-inclusive, kosher-for-Passover holiday-long specials for families.

Measles has become a global problem. There are ongoing, related outbreaks in Israel and Ukraine.

Rockland County declared a state of emergency last month, banning unvaccinated minors from being in public spaces for 30 days. But a lawsuit filed by parents at a Waldorf school in the area led a judge to strike the ban down with 20 days left to go.

Anti-vaccine parents have compared their being targeted by health officials to the persecution faced by Jews during the Holocaust. One woman wore a yellow star to a protest of the Rockland County ban.

In Rockland County, the outbreak is hitting Hasidic communities that are receptive to misinformation about vaccines, with some even going so far as to defy their rabbis, who have urged them to vaccinate.

A group called PEACH — Parents Educating and Advocating for Children’s Health — is discouraging vaccination through a hotline and magazines. Rabbi William Handler of Brooklyn insists — contrary to established medical consensus — that there is a connection between the measles vaccine and autism, Vox has reported.

The outbreak has also caught the county’s Latino community off guard, since many of them work in Hasidic homes as domestic workers, yet were not broadly informed about the outbreak.