Tucker Carlson Calls White Supremacy A ‘Hoax,’ ‘Not A Real Problem In America’ 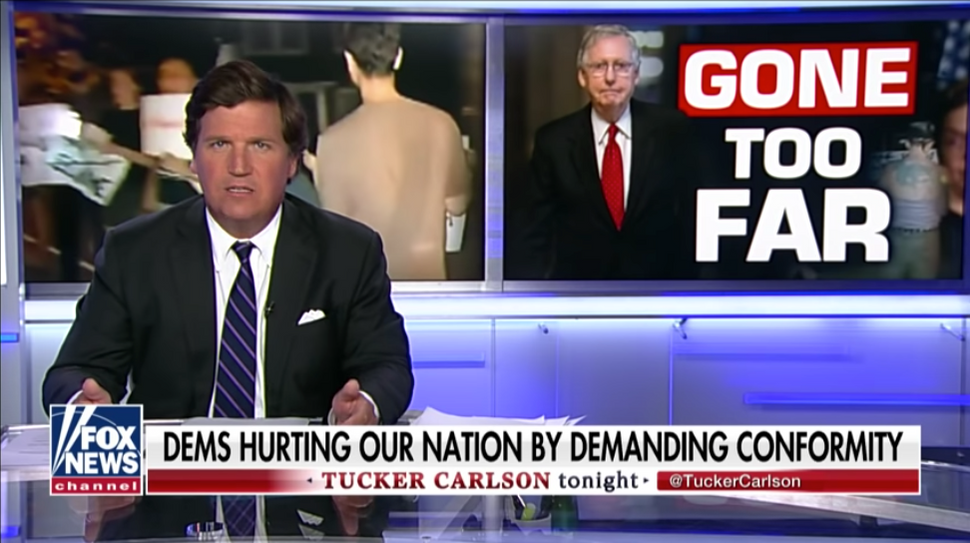 Days after a man posted a white supremacist screed to the internet before going to kill 22 people and injure 24 others in an El Paso Walmart frequented primarily by Latinx people and Hispanic Americans, Tucker Carlson said on his Fox News show that white supremacy is a “hoax,” the Washington Post first reported.

In his news commentary hour Tuesday, dramatically and deceptively underplayed the threat of white supremacist violence.

“If you were to assemble a list, a hierarchy of concerns, of problems this country faces, where would white supremacy be on the list? Right up there with Russia, probably,” he said, referencing his other frequent contention that Russian interference in the 2016 election was also a hoax.

“The combined membership of every white supremacist organization in this country would be able to fit inside a college football stadium,” he added.

Tucker Carlson: White supremacy is “actually not a real problem in America.” Calling white supremacy and issue is “a hoax” and “a conspiracy theory used to divide the country” pic.twitter.com/ydzmJ0L7UI

Carlson’s comments come at a moment when the threat of white supremacist violence has achieved a new peak in American history, and when it threatens many different minority groups in the United States, including African Americans, Latinx people, Jews and LGBTQIA people. In its report on right-wing extremist murders in 2018, the Anti-Defamation League found that over three-fourths of such murders were committed by people with ties to white supremacist groups. The ADL found that the total number of right-wing extremist murders increased 35% over 2017, to 50 total. White supremaicsts are also recruiting more on college campuses.

White supremacy underpinned the belief system not only of the El Paso shooter, but of the Pittsburgh synagogue shooter and the murderers of Blaze Bernstein and MeShon Cooper, among others.

Carlson, who grew up in San Diego, California, attended college in Hartford, Connecticut, and lives in Washington, D.C., said that he had never personally met a white supremacist.

“I’ve lived here 50 years and I’ve never met anybody, not one person who ascribes to white supremacy,” he said to his guest. “I don’t know a single person who thinks that’s a good idea.”

“They’re making this up,” he said. “It’s a talking point, which they are using to help them in this election cycle.”

Tucker Carlson Calls White Supremacy A ‘Hoax,’ ‘Not A Real Problem In America’