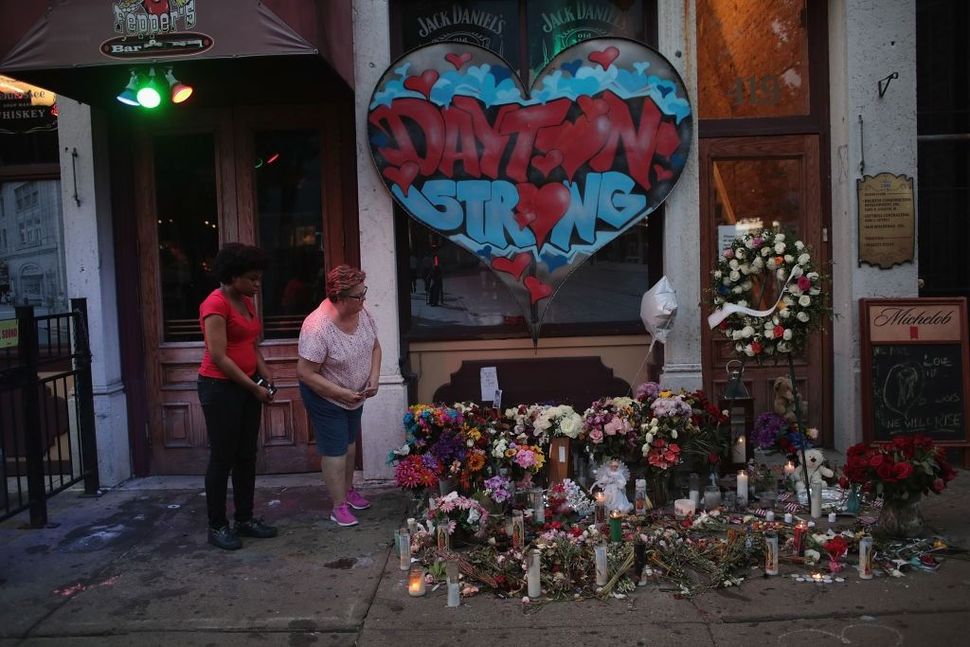 People look over a memorial to those killed in Sunday morning’s mass shooting in the Oregon District of Dayton, Ohio. Image by Scott Olson/Getty Images

Jewish Journal columnist Ariel Sobel (another former Forward contributor) pointed out that some of the gunman’s 10,000-plus tweets were retweets of Valley or of other accounts promoting his work.

Turns out the violent misogynist who murdered his own sister and eight others in the Dayton shooting was a huge fan of @elivalley.

Maybe the next time women say his cartoons normalize violent imagery and his base is virulently sexist, someone will care? pic.twitter.com/e6WPxb0cSS

Valley rejected the implication that he was in any way responsible for the shooting.

This is what they do: Lie about me (in this case a lie involving murder); incite harassment campaigns against me; spread the lies in columns + interviews. Then, if I defend myself in any way at all, they say I’m inciting against *them*
Rinse, repeat. It’s the smearmonger playbook https://t.co/Xk1rdtd3bA

The gunman reportedly had a longstanding interest in violence, with high school classmates claiming that he had a “hit list” of people he wanted to rape or murder. His ex-girlfriend has claimed that he showed her footage of the Pittsburgh synagogue shooting on their first date earlier this year. The suspect was “very specifically seeking out information that promotes violence,” FBI special agent in charge Todd Wickerham told CNN on Tuesday.

Sobel and Valley have been feuding on Twitter for months over differences of opinion on Israel, left-wing politics and Valley’s use of exaggerated physical features and Holocaust imagery to criticize the Trump administration, especially its Jewish members and supporters, for what he sees as their embrace of white nationalism. Valley was even accused of anti-Semitism by Meghan McCain (who is not Jewish) after he drew a caricature mocking her.

But things escalated in May after Sobel accused him of being a misogynist who “abet[s] anti-Semitism” and sends followers to attack his critics. Valley responded by saying the harassment of her was “inexcusable and obscene” but adding that the argument he was abetting anti-Semitism was “grotesque.”