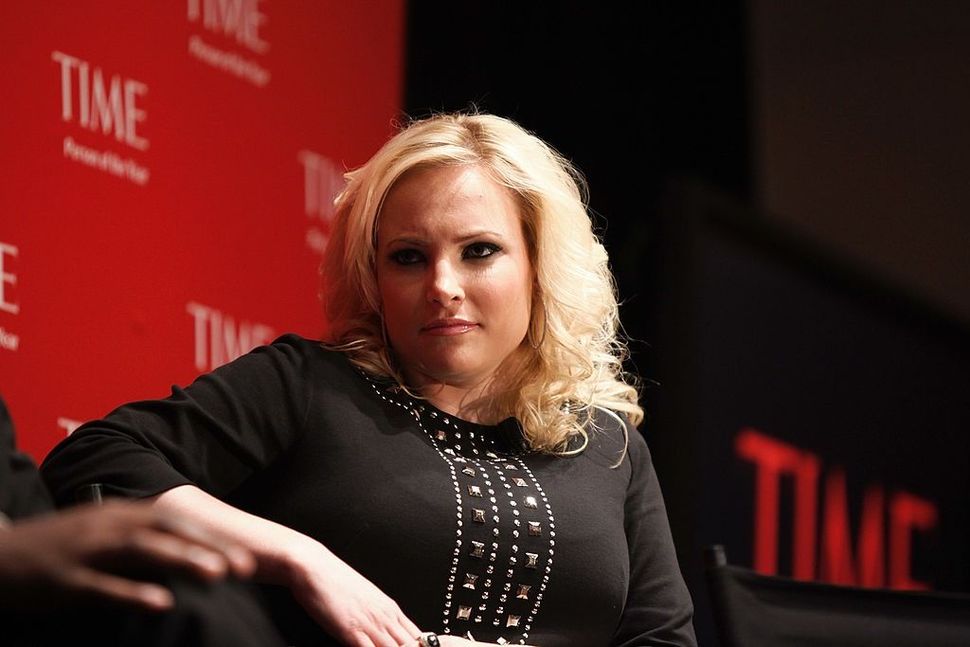 On Tuesday night, Ben Domenech, the founder and publisher of conservative website The Federalist and husband of Meghan McCain, did an odd thing. He tweeted a verbally abusive, sexually explicit rant, accusing late night host Seth Meyers of “going after” his wife with “Idiotic Anti Semitic bullshit.”

Ben Domenech is not Jewish.

Meghan McCain is not Jewish.

Seth Meyers is also not Jewish. He has one Jewish grandparent, but he does not identify as a Jew. He is married to a Jewish woman, and the couple has said that they are raising their children Jewish.

Domenech has since deleted the tweets, which referred to a heated conversation between the late night host and McCain on Meyers’ “Late Night” show on Tuesday night. In the segment, Meyers confronted McCain over comments in which she linked comments by Minnesota representative Ilhan Omar to the recent synagogue shooting in Poway, California.

“I don’t think I tied her to it in particular,” McCain said. “I think that I’m calling out what I see as anti-Semitic language.”

The argument escalated, with Meyers insisting that Omar has apologized for her remarks and deserves sensitivity as a first-time congressperson with a marginalized identity, and McCain demanding to know if Meyers is Omar’s “press person” and accusing Omar of leading the Democratic party to “extremism” with her attitude towards Jews.

It’s a reasonable dialogue to have. But there’s one thing that needs to be made clear:

Meghan McCain is a religious Christian. She cannot be a victim of anti-Jewish hatred, because she is not Jewish. As a non-Jew, McCain is also not an ideal or even appropriate spokesperson on the topic of anti-Semitism. Though a megaphone in the hands of non-Jewish allies can be a helpful tool to combat anti-Semitism, a non-Jewish person can never really be the gatekeeper of what is or isn’t anti-Semitic, especially when speaking about the behavior of actual Jews.

The talkshow pundit turned conservative media darling has, several times, taken it upon herself to speak for the Jewish people on the topic of anti-Semitism. Like her husband, she has also been so bold as to accuse Jews of being anti-Semitic when they criticize her.

When controversial Jewish artist Eli Valley first caricatured McCain in a piece posted to Twitter, she responded calling it “one of the most anti-Semitic things I’ve ever seen.”

This is one of the most anti-semitic things I’ve ever seen. Also, this reveals so much more about you than it does me… https://t.co/IdfGuWcJZu

The cartoon shows McCain clutching a Nazi “Juden” star and crying over a litany of Jewish cultural objects. McCain’s treatment of the objects, not the objects themselves, are under scrutiny here. And since, once again, McCain is not Jewish, an image of her, however hurtful, that does not otherwise contain anti-Semitic imagery, cannot be anti-Semitic.

McCain has increasingly taken on the burden of explaining Anti Semitism to America — she very effectively questioned Women’s March organizer Tamika Mallory about her association with the anti-Semitic Nation of Islam leader Louis Farrakhan on The View in January 2019. She has also regularly used her platform on The View to speak about Omar. “Just because I don’t technically have Jewish family that are blood-related to me doesn’t mean that I don’t take this as seriously,” she said of Omar’s comments about “Benjamins” and AIPAC.

Jews need our allies now, more than ever. But an ally who uses the serious charge of anti-Semitism to protect herself from her critics is no ally at all. Instead, she is a person who is deliberately using a massive platform to muddy the understanding of anti-Semitism, a concept that is already so poorly understood.

So let’s set the record straight: anti-Semitism can be veiled, subtle, complex, and hard to parse. But it cannot target people who are not Jewish.

[Editor’s note: An earlier version of this article misidentified Meghan McCain as a “former first-daughter.” She is not. Her father was Senator John McCain.]