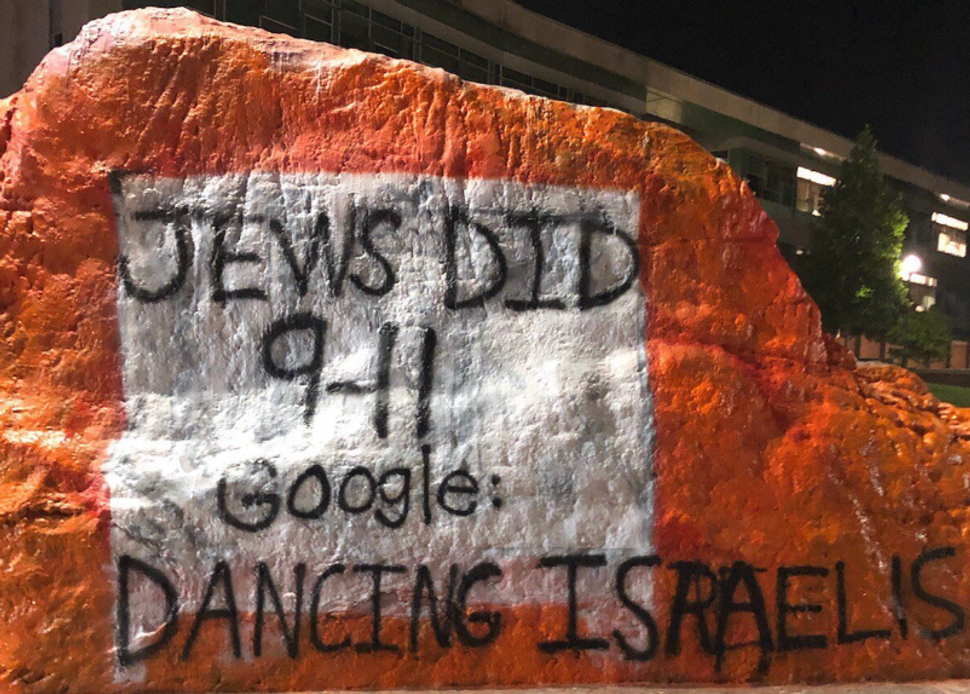 Graffiti at the University of Tennessee-Knoxville Image by twitter

(JTA) — A rock in the center of the University of Tennessee-Knoxville that students paint with inspirational messages was painted over with a message accusing Jews of being behind the 9-11 attack.

The graffiti painted on The Rock on Wednesday night read, “Jews did 9-11. Google: Dancing Israelis.”

The message that was painted over by the anti-Semitic graffiti was an image of the homemade Tennessee Volunteers T-shirt created by a young boy from Florida for his school’s “collegiate day” and who was bullied over it.  The University later offered the fourth grader a four-year scholarship to the school. The University also printed 50,000 copies of the shirt with proceeds of its sale going to the charity Stomp Our Bullying.

In a statement condemning the message painted on the rock, University Chancellor Donde Plowman wrote: ”In one week, the Rock has brought out the best and the worst. We celebrated the outpouring of love for the young Volunteer who made his own T-shirt, and someone beautifully depicted the shirt on the Rock. Last night, someone covered that message of love with an anti-Semitic hate message. We condemn that hate aimed toward members of our Jewish community, and we understand that words are not enough.”

It is at least the third time in the last year the Rock has been painted with anti-Semitic messages or symbols, the Knoxville News Sentinel reported. The first occurred in November, when a vigil was held at the Rock after the shooting at the Tree of Life synagogue in Pittsburgh.

And so it continues… @UTKnoxville, you gonna do something about it this time? pic.twitter.com/7k0mK2yDts