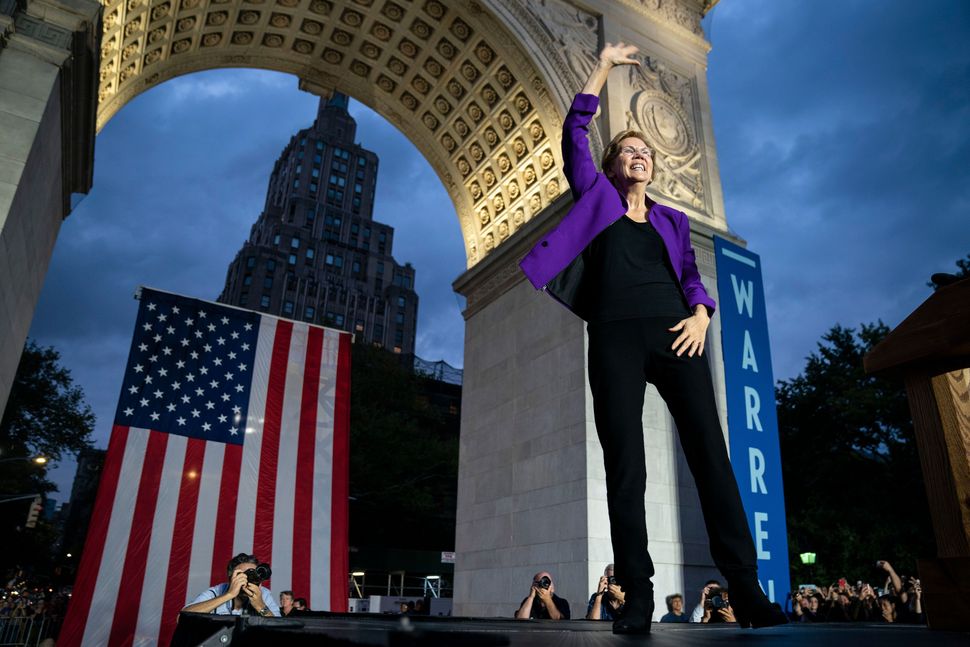 The Triangle Shirtwaist Factory fire lives on — in the political rhetoric of Elizabeth Warren.

On Monday evening, Warren held a 20,000-strong rally — her largest of the campaign — in New York City’s Washington Square Park, just two blocks from where the fire occurred 108 years ago. It remains one of the deadliest industrial disasters in U.S. history: Women sewing garments in the factory were trapped in the fire because the exit door had been locked by factory management. Some 146 people died from suffocation, from burns or after throwing themselves out of the factory windows.

The story of the fire, and of the people whose careers in public service it inspired, framed one of Warren’s most compelling — and widely reported on — speeches yet. She spoke about Frances Perkins, a witness of the fire, who became the first woman secretary in a presidential cabinet, and how Perkins partnered with activists to bring herself into a historic role and make sweeping changes to the labor code.

Warren put a fine point on the story by bringing it up to present day, and comparing Perkins’ fight with her own fight to limit the amount of corporate influence in politics, especially in the areas of climate change, health care and gun laws.

“On the face of it, these three are totally different issues,” she said. “But despite our being the strongest and wealthiest country in the history of the world, our democracy is paralyzed. And why? Because giant corporations have bought off our government.”

Corruption killed over 100 women in the Triangle Shirtwaist Factory Fire. But in the aftermath of that tragedy, women workers organized, fought back, and secured major victories. I know big, structural change is possible—because America’s done it before. https://t.co/PPedaxnUxS

The Triangle Shirtwaist Factory fire has remained a focal point of labor history and Jewish history: Many of the seamstresses in the factory who died were Jewish recent immigrants. Forward reporters were on the scene on the day in 1911 that the fire occurred. The Forward also covered the aftermath of the fire extensively as well.

Last year, the composer Julia Wolfe premiered a work inspired by the fire, as part of a commemoration which included an exhibit of archival materials from the Forward.