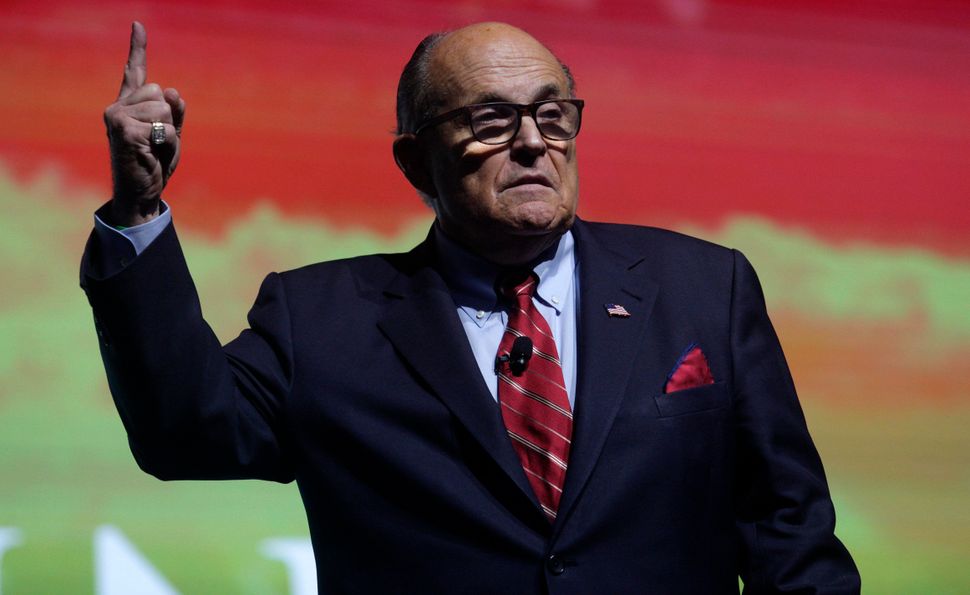 Rudy Giuliani at the Turning Points USA conference in Florida on December 19. Image by Getty

Rudy Giuliani’s latest target is the Jewish billionaire philanthropist and Holocaust survivor George Soros, whom he attacked in a recent interview as “hardly a Jew.”

Speaking to New York Magazine’s Olivia Nuzzi, Giuliani spoke about a variety of subjects, including his business dealings in Ukraine and the numerous people who knew him as a mayor and prosecutor who have hard time squaring his persona now with his persona then.

But his most shocking comments were about Soros, who survived the Nazi occupation of Hungary as a teenager. Giuliani parroted conspiracy theories that Soros “controls” people like Marie Yovanovitch, the former U.S. ambassador to Ukraine. Yovanovitch testified before the House Intelligence Committee earlier this fall about her alarm at Giuliani and the Trump administration’s attempts to compel the Ukrainian government to investigate Hunter Biden, Joe Biden’s son, efforts that led to Trump’s impeachment last week. Giuliani also said that Soros is “employing FBI agents.” Such conspiracy theories about Soros, which mimic the language of several age-old anti-Semitic tropes, are widely interpreted as anti-Semitic.

“Don’t tell me I’m anti-Semitic if I oppose him,” Giualiani said, according to New York. “Soros is hardly a Jew. I’m more of a Jew than Soros is. I probably know more about — he doesn’t go to church, he doesn’t go to religion — synagogue. He doesn’t belong to a synagogue, he doesn’t support Israel, he’s an enemy of Israel. He’s elected eight anarchist DA’s in the United States. He’s a horrible human being.”

After the interview was published, it ignited widespread outrage from prominent Jewish figures on social media.

Giuliani arguing that he is “more of a Jew” than a literal Holocaust survivor is the logical conclusion of Trumpist Jews’ argument that liberal and left wing Jews (the majority of American Jews!) are not really Jewish. https://t.co/1X4OUrWT9C pic.twitter.com/thyIyXlF0H

After the interview was published, a reporter from NBC News contacted Giuliani to ask if his comments about being more Jewish than Soros were made in jest.

“I’m more Jewish than half my friends,” Giuliani responded in a text message.

Last year, Rep. Louie Gohmert drew fire for claiming, during an appearance on Fox News, that “George Soros is supposed to be Jewish but you wouldn’t know it from the damage he inflicted on Israel.” In October 2018, during Brett Kavanaugh’s Supreme Court confirmation hearings, Giuliani wrote on Twitter that Soros was the “anti-Christ.”