Jewish groups condemn Marjorie Taylor Greene. Her response: ‘I will never back down.’ 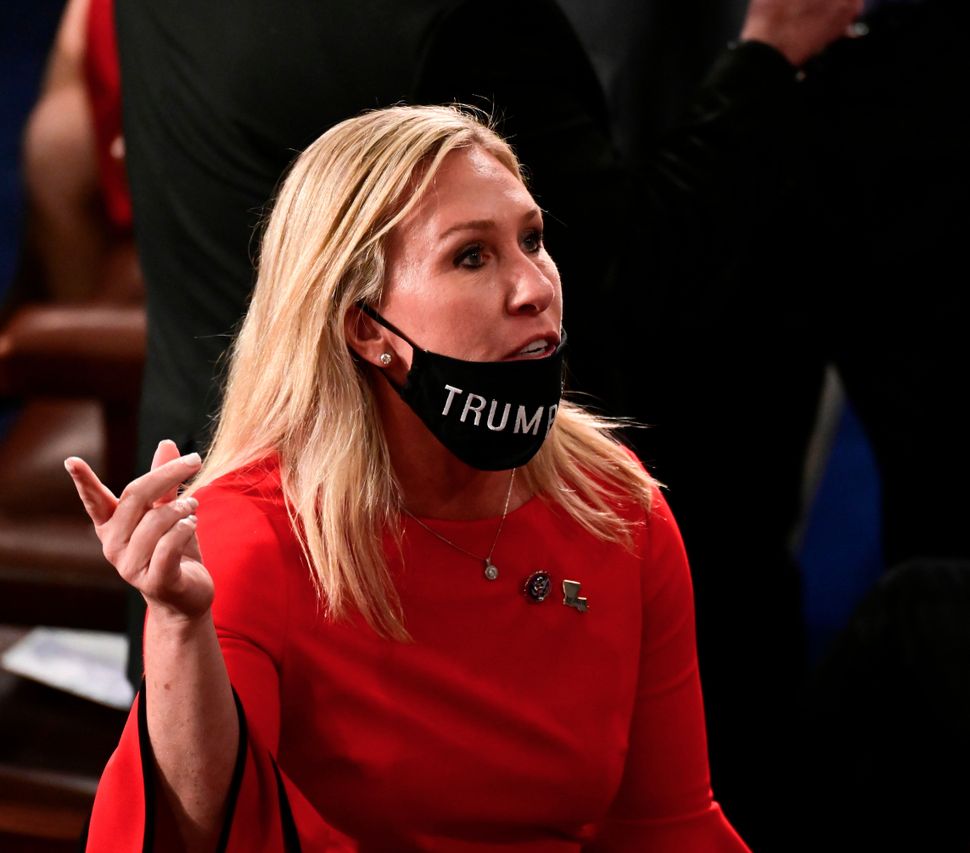 (JTA) — Marjorie Taylor Greene, the Republican congresswoman who has advanced a range of dangerous conspiracy theories, including some that are explicitly antisemitic, is refusing to step down or even apologize, despite increasingly fierce criticism from Jewish groups and others.

Among Greene’s critics are right-wing and centrist Jewish groups that do not frequently criticize Republican lawmakers or elected officials at all.

“I will never back down,” Greene said in a defiant statement Friday afternoon, one day after revelations of one of her conspiracy theory-filled Facebook posts from 2018 thrust the term “Jewish space lasers” into public discourse.

In the post, the freshman congresswoman from Georgia theorized that the Rothschild family was involved in starting California wildfires using lasers from space. Invoking conspiratorial control by the Rothschild baking family over world events is a centuries-old antisemitic stereotype, and it is also a theme in the pro-Trump QAnon conspiracy theory that Greene has promoted.

On Friday, the Republican Jewish Coalition released a statement condemning Greene and saying that it is “working closely with the House Republican leadership regarding next steps” in demonstrating that Greene is “far outside the mainstream of the Republican Party.”

The forceful statement represented an advance over the group’s comments Friday morning, in which it emphasized that it had supported her Republican primary opponent and then not backed her. The group supported a successful primary challenge last year to Steve King, a Republican congressman from Iowa who had a string of associations with white supremacists.

“The RJC has never supported or endorsed Marjorie Taylor Greene,” the statement said. “We are offended and appalled by her comments and her actions. We opposed her as a candidate and we continue to oppose her now.”

Also on Friday afternoon, the Conference of Presidents of Major American Jewish Organizations released a statement condemning Greene. It is rare for the conference, which represents groups with a wide range of ideological orientations, to speak out directly against an elected official.

“We are outraged by the statements, past and present, of Representative Marjorie Taylor Greene. She routinely traffics in unfounded conspiracy theories that are often anti-Semitic [sic] in nature,” the group said in its statement. “There must be a swift and commensurate response from congressional leadership making clear that this conduct cannot and will not be allowed to debase our politics.”

Jewish groups are far from alone in pressing for action to be taken against Greene. Also this week, video emerged of Greene harassing a survivor of a 2018 school shooting with allegations that the shooting did not take place, and several of her colleagues in Congress announced that they do not feel safe working with her. Cori Bush, a freshman congresswoman from Missouri who is Black, said she would move her office away from Greene’s after multiple altercations.

On Friday afternoon, Greene signaled — in a statement titled “A Message to the Mob” — that she felt emboldened by the criticism.

“Every attack, every lie, every smear strengthens my base of support at home and across the country because people know the truth and are fed up with the lies,” the statement said. “For me, it’s people over politicians. It’s people over Big Money PACs. It’s people over powerful elite corporations and the Silicon Valley cartel who are trying to cancel all of us.”

She added, “I will never back down. I will never give up. Because I am one of you. And I will always represent you.”

Some Democratic members of Congress say Greene should be expelled from Congress, a move that would require a two-thirds vote by her colleagues. That has happened only twice since the Civil War. Republican leaders this week appointed her to the House’s education committee.

The post Jewish groups condemn Marjorie Taylor Greene. Her response: ‘I will never back down’ appeared first on Jewish Telegraphic Agency.

Jewish groups condemn Marjorie Taylor Greene. Her response: ‘I will never back down.’