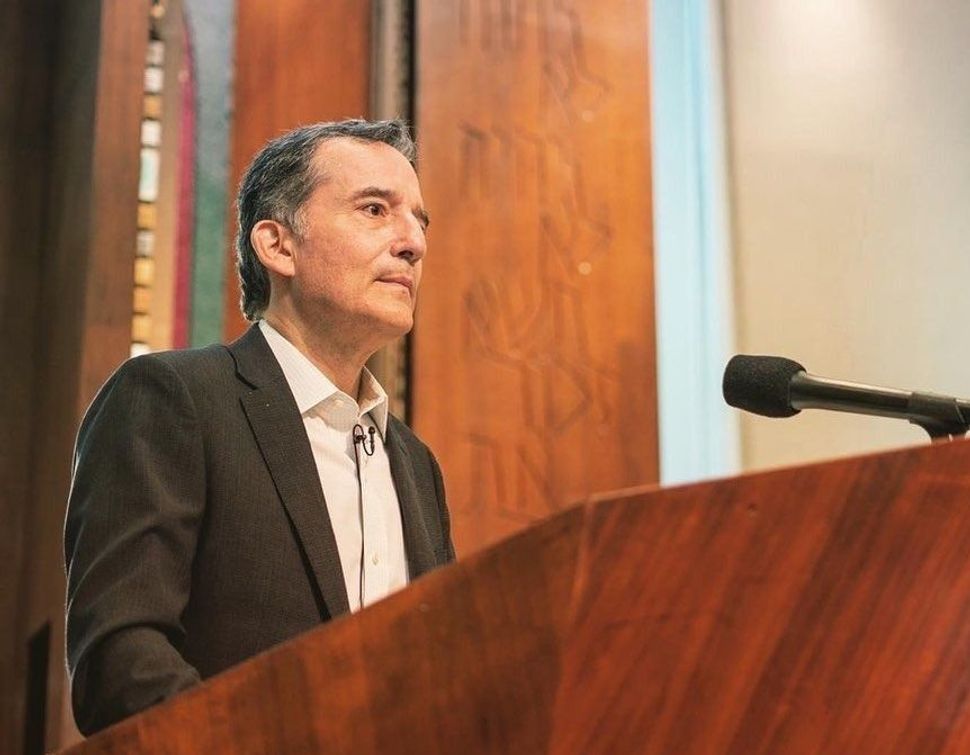 Rabbi David Wolpe once said that “Clubhouse and Judaism go together like peanut butter and chocolate.” Courtesy of Sinai Temple

Rabbi David Wolpe of Sinai Temple, the largest Conservative congregation in Los Angeles, announced Thursday that he will step down from his position in June 2023.

Wolpe has been with the congregation for nearly a quarter century. “They have been wonderful years, filled with joys and sadnesses, with debate and discovery, but mostly with learning and with love,” he wrote in a letter he sent to the congregation Wednesday night. Upon his departure, he will serve as a visiting scholar at Harvard Divinity School in Boston.

Last night I sent this letter out to my congregation: pic.twitter.com/aoTYN9yY6s

In the first year of the COVID-19 pandemic, Wolpe garnered thousands of followers on the audio-only app Clubhouse, which he used to teach Torah. It was only the latest in a series of moves that saw Wolpe become one of the most public-facing rabbis in the country.

Wolpe, who in 2012 topped Newsweek’s list of “America’s Top 50 Rabbis,” is a regular commentator in coverage of Jewish issues and a longtime columnist for The New York Jewish Week.

The prominent Conservative leader made headlines in 2021 for signing a Jewish “Harper’s letter” that condemned the alleged “suppression of dissent” among Jews in the racial justice movement, as well as for his criticism of progressive rabbis and rabbinical students for blaming Israel, in his view unfairly, for crisis in the Middle East.

This February, Wolpe sparked controversy when he posed maskless for a photo at the Super Bowl.

More recently, he has rallied behind Ukrainian President Volodymyr Zelenskyy amid the Russian invasion. “For Jews, to see a Jewish president as not only president of Ukraine but as a symbol of courage and defiance against a tyrant, especially against the tyrant who in many ways represents the Soviet tyranny — which Jews also suffered from — it’s astonishing and remarkable,” Wolpe told the Los Angeles Times.

Before joining Sinai Temple as senior rabbi in 1997, Wolpe taught at the Jewish Theological Seminary of America in New York, the American Jewish University in Los Angeles, Hunter College and UCLA.

In the letter announcing his resignation, Wolpe wrote that Nicole Guzik and Erez Sherman, who are married and currently serve as rabbis at Sinai, will jointly take over his position, pending the confirmation of the board and congregation.

“This shul has been a home, a community, a source of warmth, enlightenment and growth for my entire adult life. I am grateful to each and everyone of you who have given me the enormous zechut, privilege, of being your Rabbi and given me the even greater gift of being my friend,” Wolpe wrote. “May we all know increasing passion for our tradition and kindness in our community in the months and years ahead.”