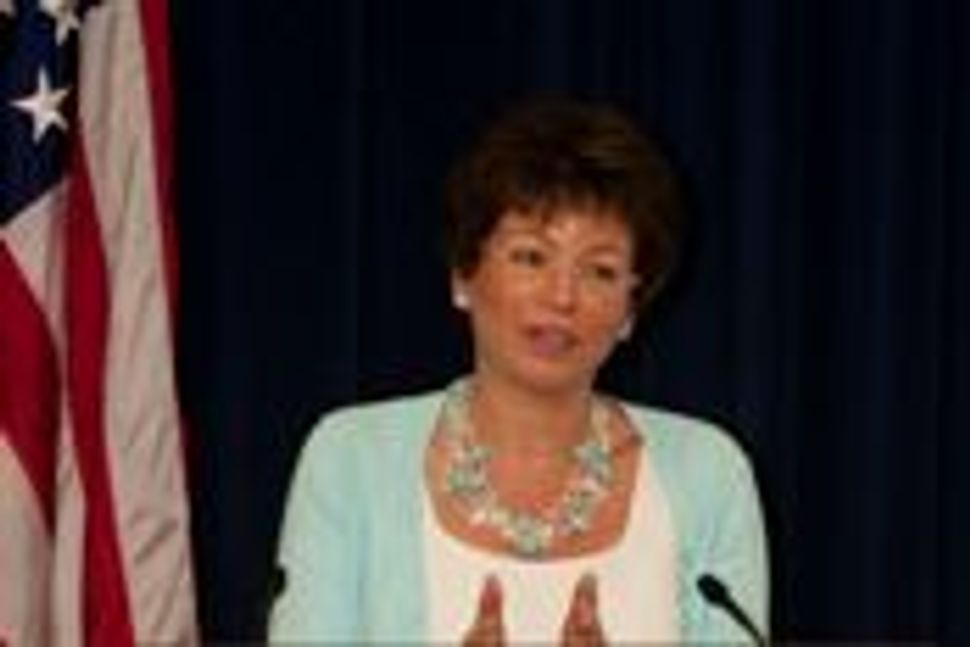 Jon Carson, deputy assistant to the President and director of the White House Office of Public Engagement, succinctly articulated the purpose of the series: “I’m not here to talk,” he said. “I’m here to listen about what you’re seeing across the country.” For many in Hazon’s cohort and millions of American Jews, this issue is food justice.

Early Friday, after a lively opening session at the National Press Club, the large group split four ways for agency briefings about housing, healthcare, education and food justice. I joined the food justice cohort for an overview of food accessibility, policy and budgeting by three key members of the White House staff.

It was a pleasure hearing Curti mention the USDA’s first Food and Justice Passover Seder and stress the importance of nonprofit partnerships in actually executing the communal work. She painted a troubling landscape of hunger and food access in America, revealing that 50.2 million Americans were food insecure at some point in 2009. She said a recent study also found that 23.5 million Americans live in low income areas that are more than 1 mile from a food store, a trouble with food access on the retail side often described as “food deserts” or “food swamps.” The third theme she discussed was obesity, saying it has become clear that simply “too few fruits and vegetables consumed, sometimes by choice, but many times not. “ She then detailed various ways the government is combating these issues; from their 18 different agencies addressing producer and consumer components of accessibility and 15 partnerships around nutrition assistance programs.

The Supplemental Nutrition Assistance Program (SNAP) is the most important with approximately 44 million Americans enrolled, up from 28 million in 2008. This number, Curti added, still only reaches 68% of eligible participants, which she called “an issue of reach, not funding.” She highlighted several programs, such as the Summer Food Service Program (SFSP), which gives food to nonprofits to distribute to kids. Others such as the Community Food Projects Competitive Grants Program relate to urban farms and gardens and address the supply side of food access. There is also the Healthy Food Financing Initiative (HFFI) which helps to increase the availability of nutritious food in grocery stores, small retailers, corner stores, and farmers markets.

Curti finished her presentation by praising who in the bigger picture is the greatest champion of healthy food access: the First Lady, Michelle Obama. Her Let’s Move! initiative to build healthier communities has recently received commitments from private retailers like Wal Mart and Walgreens as well as public support from a variety of individuals and venues. Curti acknowledged the government’s many food justice oriented Jewish nonprofit partners (including Hazon!) and thanked us for our presence and dedication to the cause.

Brandon Willis, Senior Adviser to Agriculture Secretary Tom Vilsack spoke next, and Jennifer Yezak, the Director of Intergovernmental Affairs at the USDA chimed in during the question and answer session. Willis overviewed the Farm Bill and said that while it is difficult to know its timing or breakdown, funding cuts are inevitable. The Farm Bill is incredibly complex, with approximately 70% of its funding going to nutrition programs, followed by conservation and commodity programs. This complexity leads to health, economic, and environmental issues and as with any complex and broad legislation, straightforward answers were difficult to come by.

Yezak shared that recent discussions about regulatory reform provided the Administration with some ideas that need to, and will, get on the table: “there are efforts and discussions about this in the USDA. Rural Development State Directors are looking at ways to make their loans and grant programs more accessible and easier to apply for.” She encouraged us to continue our involvement as these conversations progress and said she will be on hand as a resource and source of support.

Ruth Messinger, president of American Jewish World Service echoed this sentiment: “We must not underestimate the power of letting our government know that global food justice, equitable healthcare, education reform, and affordable housing are authentic expressions of Jewish values. They are issues that Jewish leaders care about deeply and will work on intensively.” This collective commitment to advance social justice in the food realm has the potential to drive change in a big and powerful way. Moments like last week’s symbolize that we are doing so across communities and around the country, in the Jewish community and beyond.

Liz Kohn, originally from Evergreen, Colorado, is a Masters in Social Work 2012 candidate in the University of Michigan’s Jewish Communal Leadership Program and is Hazon’s Social Work Intern. Her professional and volunteer work and travels have deepened her desire to develop skills in meeting both individual needs and communal challenges related to accessibility and affordability of fresh, healthy food.