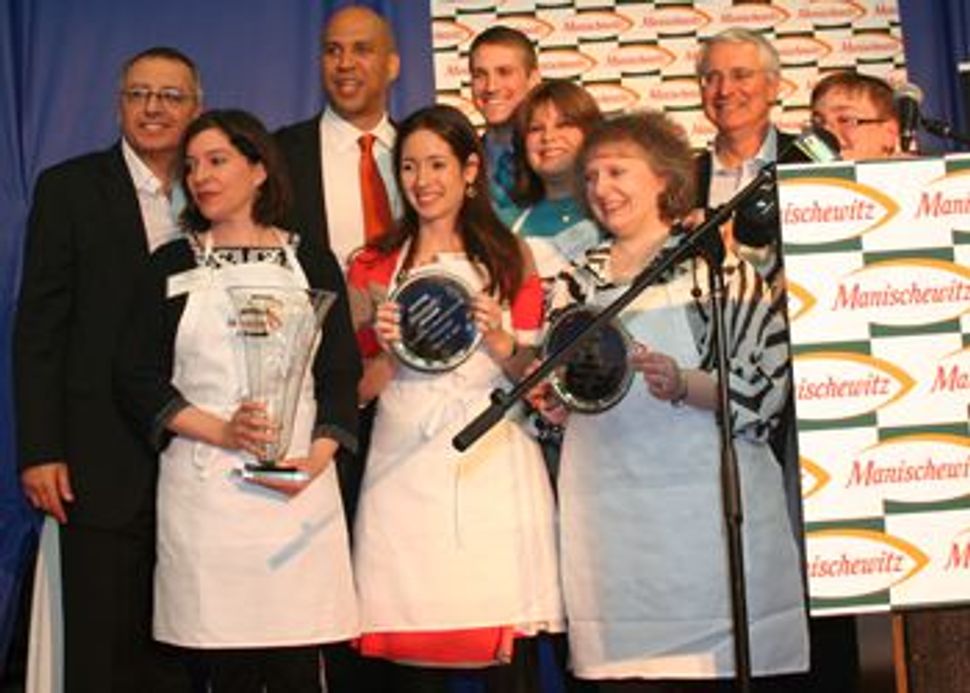 Before we get to the food (and believe us, we’ll get to the food), we’d be remiss if we didn’t point out how much of a rock star Newark mayor Cory Booker was at the seventh annual Man-O-Manischewitz Kosher Cook-Off on Thursday.

After posing with star-struck guests, Booker took the stage to praise Manischewitz for moving its headquarters to Newark, congratulate the finalists and practice his Yiddish. He described his feelings at the event as “nachas” and added that, as mayor, his ribbon cutting skills have gotten so strong he “could be a mohel.”

At the end of his speech, which was peppered with applause, Booker said, “Baruch Hashem for Manischewitz,” and finally, “Yasher Koach.”

Okay, now back to the food competition at hand. The event — held for the first time at the plant, where just next door, the year’s last batch of Passover matzos were being completed — brought together five finalists, whose recipes were chosen from thousands of entries.

Manischewitz’s marketing staff, along with research and development specialists, had the task of culling through the entries. “We’re always looking for something different,” said Alain Bankier, co-CEO of Manischewitz. “We’re not interested in your mom’s brisket.” 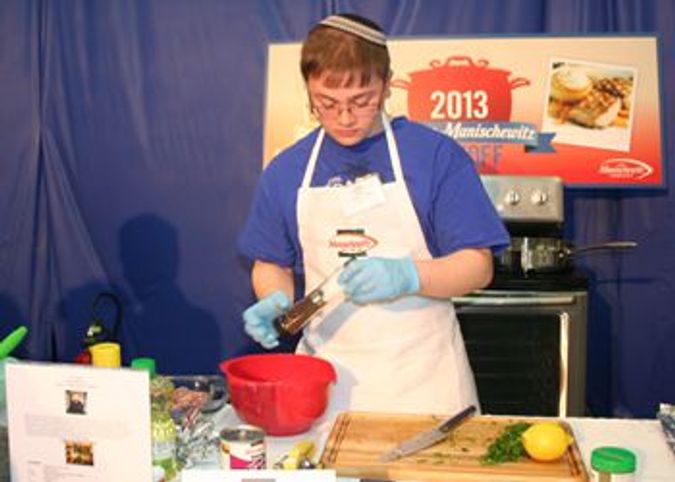 The judges — headed by recent Israeli transplant Jamie Geller — voted the least traditional dish a winner: Faux Pho, created by Josie Shapiro of San Francisco. “I love Vietnamese food,” Shapiro said, “and I like the fact that most of the ingredients are things you’ll have in your pantry — like egg noodles, curry powder, coconut milk and chicken broth. As a mother of two young kids, I often don’t have the energy to shop and cook after work.”

Shapiro beat out fellow finalists Robin Saul of Atlanta, who made a Balsamic Mushroom Matzo Panini with Mango Jam; Allison Hoschander of Woodmere, New York, with a Chicken, Potato and Leek Pie; Michele Kusma of Columbus, Ohio, with a Sweet and Spicy Seared Tuna and Yitzi Taber, a 17-year-old who was cheered on by his classmates from the Torah Academy of Bergen County in New Jersey and made a Garlic Chicken Rollatini with Falafel Balls.

Yitzi, who wore orange Crocs (a la Mario Batali) and a “Chef Y” shirt, told us he hopes to attend the Center for Kosher Culinary Arts in Brooklyn (and Yeshiva University) and eventually open a restaurant called Chef Y’s Place, with separate meat and dairy kitchens.

Each of the finalists had to adhere to contest rules — recipes had to include one of Manischewitz’s all-natural broths, in addition to another Manischewitz product, but they could not have more than nine ingredients total. Chefs each had an hour to prepare their dishes for the judges, and they made them using Maytag ovens (which happen to have sabbath settings).

The grand prize was $25,000, which includes a series of Maytag appliances and cash.

Before she won, Shapiro told us she could certainly use those appliances. “I really need a new kitchen,” she said. “It would be nice if my kids could walk past my dishwasher without getting burned, and I’d really like a stove with more than three working burners,” she said. And that is exactly what she got.

2) Strain, run under cold water to stop cooking process, and set aside.

3) Heat oil in a Dutch oven or large, heavy-bottomed pot over medium heat.

4) Add curry powder, stirring until fragrant, about one minute.

7) Add broth, orange juice and coconut milk and bring to a boil.

8) Turn heat to low and gently simmer until chicken is almost cooked through, about 15 minutes.

9) With a slotted spoon, remove chicken from soup and roughly chop into bite-sized pieces.

13) Remove from heat and season with lime juice, salt and pepper.