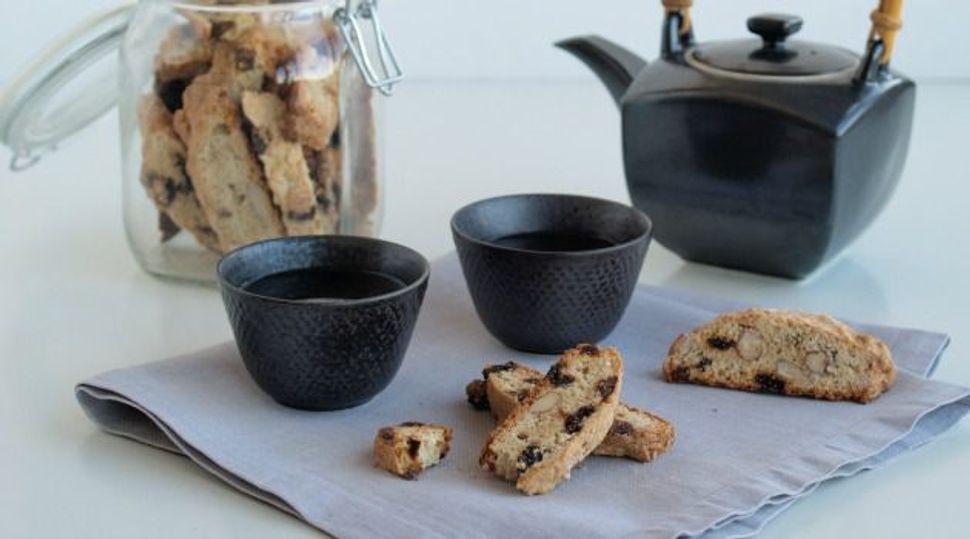 Dorie Greenspan has cracked the code of how the French bake at home for family and close friends.

Forget the fussy confections on display in pastry shop windows in even the smallest Gallic towns. In her latest cookbook, “Baking Chez Moi,” Greenspan shares her French friends’ homespun recipes and gives you the confidence to recreate these largely simple desserts in your own home.

I caught up with the delightfully prolific award-winning author last week at the 92nd Street Y, the first stop on Greenspan’s book tour, where we gabbed like schoolgirls before she sat down before a packed audience for a discussion with New York Times food writer Julia Moskin.

Despite having nearly a dozen cookbooks under her belt — and having successful collaborations with Julia Child and French pâtissier Pierre Hermé, Greenspan wasn’t always at home in the kitchen. She grew up in Brooklyn, where her father owned a supermarket and where her mother made grocery lists organized by aisle — instead of dinner. Her grandmother visited weekly to feed the family, and a housekeeper filled in the rest of the time. 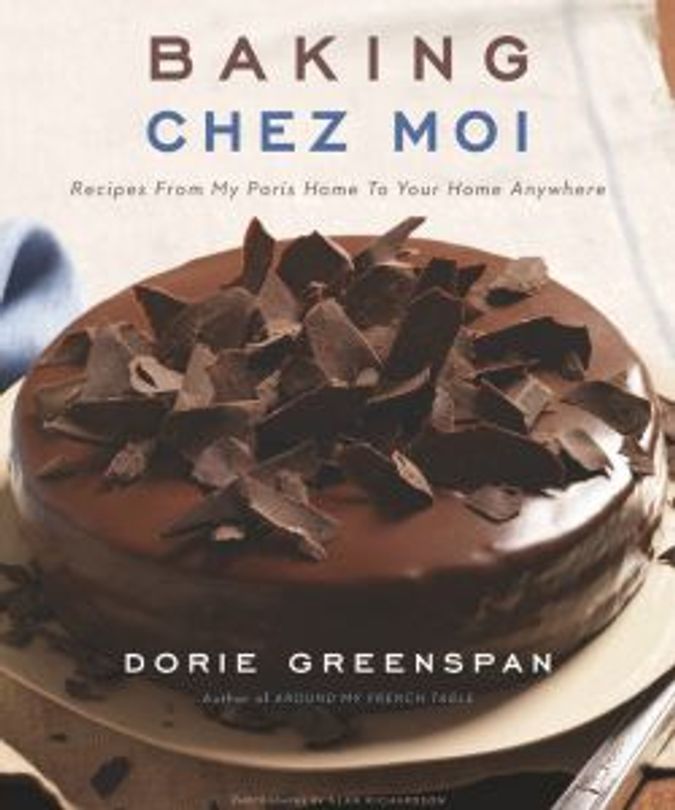 Greenspan nearly burned down her family’s kitchen when she was 13 and didn’t turn the oven back on until she was 19 and newly married. She likens her foray into baking to learning to play the piano: “At first you just make noise, but you work on it every day and you see yourself getting better,” she said. “I taught myself from books and realized that it takes desire to learn to bake.”

This reverence for learning — Greenspan was an academic pursuing a doctorate in gerontology before turning to cookbookery — and an infectious delight in the subject matter may explain why her own books are so approachable. You can almost hear her gentle voice guiding you through the recipes, warning you when a batter might look curdled but is okay, or providing recipe variations in her bonne idée side notes.

This past summer, a few friends and I spent a day baking with Greenspan in her Connecticut home. (She splits her time between Connecticut, New York and Paris.) Her desk sits in a kitchen decorated with iconic French vintage posters, an assemblage of Gallic roosters and an entire batterie de cuisine hanging from the ceiling, lining the windowpanes and organized into canisters.

We started the day at a farm table set with a purple and red jacquard tea towel and spread with rich yogurt, berries and homemade granola, the instructions for which are in “Baking Chez Moi.” Greenspan’s husband, Michael, brewed coffee while we donned aprons and rolled up our sleeves to bake our way through half a dozen recipes. One of my favorite treats was palets de dames, domed cake-like cookies dipped in a confectioners’ sugar icing. Had the palets been brushed with an additional few strokes of chocolate frosting, one might mistake them for the best possible version of the quintessential New York black-and-white cookie.

With Greenspan by your side, either in person or on a sugar-encrusted page, anything seems possible. When the sweet dough that I had carefully and delicately rolled out fell apart as I tried to drape it over a tart pan, Greenspan put me at ease and helped me patch it into a piecemeal press-in crust, of which she said even Martha Stewart would be proud. Once the baked crust was covered with a luscious layer of salted caramel, no one was the wiser as to whose crust was whose. 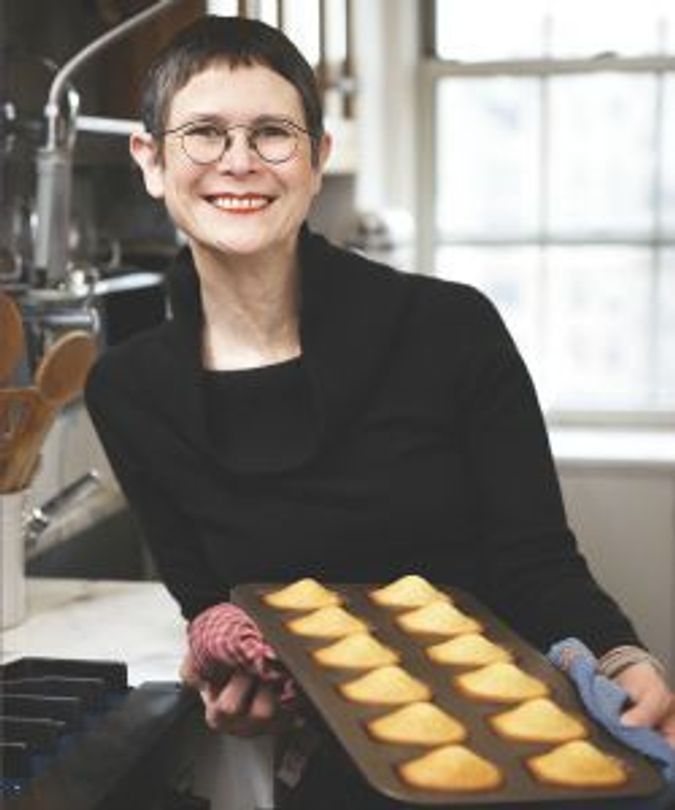 While the caramel tart was cooling, we all gathered on the patio for an alfresco lunch of assorted vegetable salads, a ricotta-herb dip and generous pours of rosé. The main course was a large filet of salmon that Greenspan had smoked and then, fretting that it wasn’t quite right, baked as well. It was, needless to say, delicious.

I was reminded of that lunch when, at the 92nd Street Y, Greenspan joked to the audience, “You’d think that after all these years, cooking would just be effortless, that I could make it look effortless. But no! I make food and then I worry. It doesn’t matter if I’m cooking for neighbors or chefs, I just worry. But that never stops me from inviting people over.”

For “Baking Chez Moi,” Greenspan collected deeply personal recipes inspired by nearly forty years of traveling back and forth to France. The book includes desserts her French friends bake at home and those she developed in her French kitchen to straddle the two cultures she loves. As she told the audience: “You cook for yourself and other people, but when you bake, you don’t bake for yourself, you bake to share. You bake for love and for people you love.”

Greenspan celebrates holidays, Jewish and otherwise, with food. In the kosher home of her youth, her family ate chicken or brisket every Friday night and rounded out the weekend with Sunday morning bagels, bialys and smoked fish. The spiced honey cake in her latest book might be inspired by Alsatian pain d’épices, but Greenspan’s kitchen tinkering turned out a cake that she finds surprisingly reminiscent of her Russian grandmother’s Rosh Hashanah specialty. For Hanukkah, she recommends merveilles — “miracles” traditionally fried for Carnivale — and nun’s beignets (you’ll have to read the book to learn the story behind these). And while she never set out to create parve or pesachdik sweets, there are about twenty recipes that are naturally either dairy- or gluten-free.

The day after I heard Greenspan speak, I baked a batch of her fruit-and-nut croquants, adding a handful of chocolate chips for good measure. Though my Manhattan apartment is small, can feel cramped when my hair frizzes up and never seems tidy enough for company, these parve biscotti-like cookies served as a simple pretext for having people chez moi for an impromptu Shabbat lunch. One friend brought wine and challah. Another made meatballs. I tossed together a few small salads. We whiled away the cold rainy afternoon, catching up, sipping tea and nibbling on croquants. I smiled to myself and sent a silent thank you to Dorie Greenspan for reminding me why I bake.