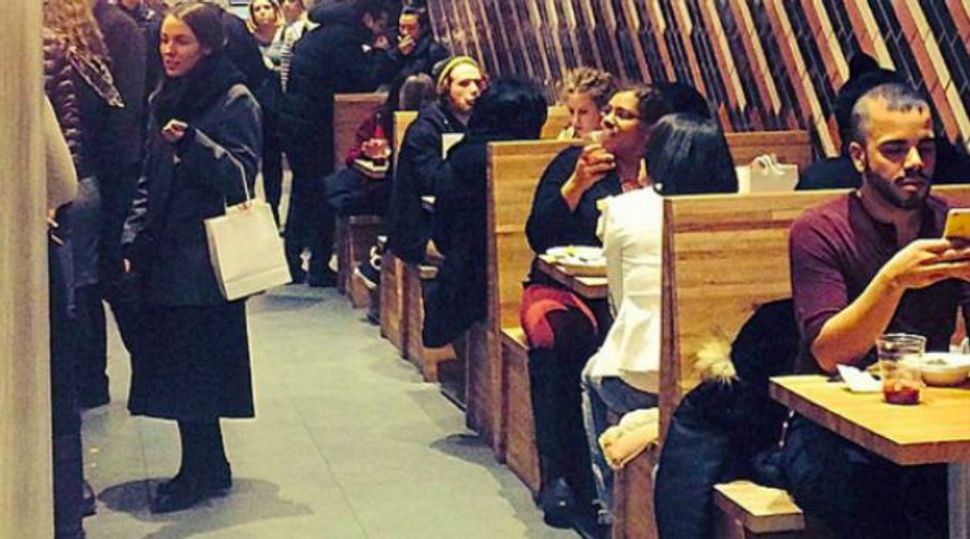 What happens when a Mexican chef, a Korean restaurant franchisee, and a Jewish entrepreneur go out to eat?

No, it’s not a Borscht Belt setup; the answer’s a snazzy “modern Mexican” restaurant that just opened in Manhattan’s Flatiron district.

Perez’s recipes for the fast-casual spot mash up “a wide variety of chili peppers, fresh produce, rich spices [and] beans bold enough to stand on their own,” according to an opening announcement.

…The world’s “coolest kosher restaurant” — at least according to the Daily News — has closed. Mason & Mug billed itself as New York’s first kosher small-plate/craft-beer/wine bar. A note taped to its door, and posted on Facebook, provides no reason for the shuttering, but proclaims that “we hope that our message that kosher restaurants should not be afraid of pushing the envelope will continue.”

…The nouveau-Jewish wave continues to swamp the Big Apple. Sadelle’s, an appetizing store from the crew behind hit restaurants like Carbone, Dirty French and Parm, should open by early summer, Eater reports. Jeff Zalaznick, a partner in holding company Major Food Group, told Eater the spot will be “our version of Barney Greengrass”; a liquor-license application describes the new restaurant as “a full service American restaurant serving Jewish NY Style fare at breakfast, lunch and dinner.”

…And the owners of Crown Heights coffeehouse Little Zelda have rebranded Wedge, their next-door cheese shop, as Nagle’s Bagels, reports Brooklyn blog Brownstoner. Nagle’s bagel varieties include zaatar, according to a Foursquare review.

…Kutsher’s kitschy Tribeca restaurant may be gone, but its spirit will animate a pop-up seder at an Upper West Side seafood joint, of all places.

“The menu’s inspired by traditions both old and new — and having food that is fun, doesn’t take itself too seriously and is great to share. It’s basically what you wished your bubby served at her house,” said Zach Kutsher, scion of the legendary Catskills family and owner of Kutsher’s Tribeca. “The menu also represents some of Kutsher’s greatest hits.”

Since Passover is a family celebration, Kutsher said, “we wanted to add a few ingredients like the caviar with the potato latkes and the foie gras with the roast chicken to make the meal that much more special, kind of like a bar mitzvah without having to closely follow the waiter during the cocktail hour to make sure that you got the good stuff.” The dinners cost $89 per person and $49 for children under 8 — with a seder plate and haggadah thrown in.

…What’s cooking at the JCC? A lot, judging from The Community Table, a handsome new cookbook set for release March 23 from Hachette imprint Grand Central Books. Subtitled “Recipes and Stories from the Jewish Community Center in Manhattan & Beyond,” the cookbook taps JCCs nationwide for anecdotes about food and friendship; it all gets whipped into shape by three chef-authors: Katja Goldman, Lisa Rotmil and Judy Bernstein Bunzl. The Manhattan JCC put together the ambitious project. Watch for more Forward coverage.

…Enlightened Ice Cream has become familiar to regulars at Manhattan congregations like the Murray Hill Jewish Center, where 27-year-old company founder Michael Shoretz has donated frozen treats for special events. Last week, the company snagged a glowing profile in The New York Times. Sales of the bars, which are said to have one-third the calories, 75 percent less sugar and twice the protein of regular ice cream, hit $1 million in 2013, and more than $4 million in 2014, the Times reported.