Sizing Up Sadelle’s With the Great Arthur Schwartz 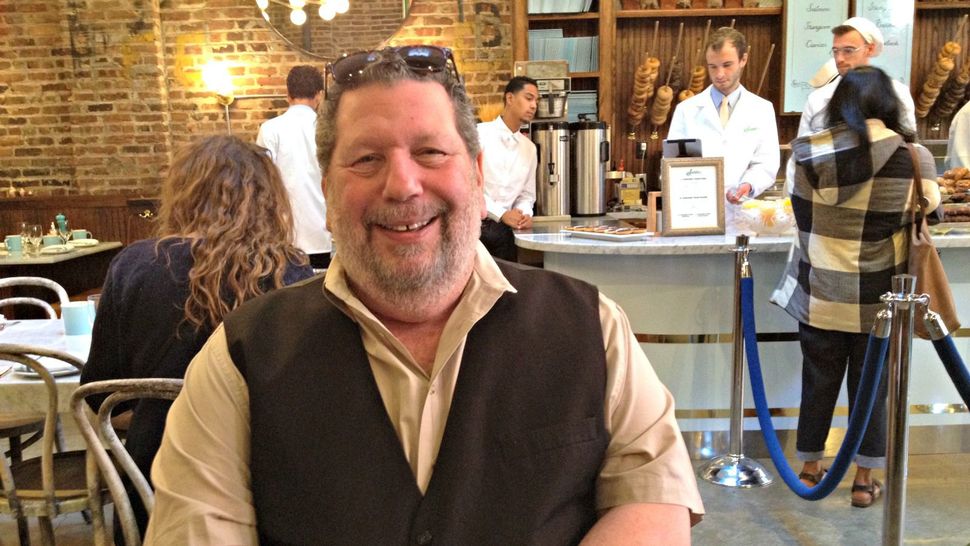 I first met Arthur Schwartz in late 2006. I was 24, still fairly new to Brooklyn, and just beginning to dip a spoon into the field of food writing. Arthur was a lifelong New Yorker and a pioneer food writer with , and a popular radio show under his belt. In my eyes, and in the eyes of many others, he was a legend.

Not knowing what to expect, I emailed him to see if he might be open to an interview for Zeek, the independent magazine where I was interning. To my delight he not only agreed, but offered to take me on an eating tour of Midwood’s kosher butchers, bakeries and restaurants. Naturally, I cleared my schedule.

A week or so later, Arthur, his partner Bob and I piled into their car and took a drive into what felt like the true belly of Brooklyn. Any feelings of intimidation quickly dissolved as they charmingly narrated the neighborhoods whizzing past the car window.

Arthur, I learned that day, is the kind of person who can tell you where to get the best Jewish babka in Brooklyn (Isaac’s Bake Shop) and point out an ornate church building in Crown Heights that, in another lifetime, housed a Loehmann’s department store. I marveled at his lifetime of accumulated New York and Jewish-food memories, his culinary history chops (the New York Times once called him a “walking google of food and restaurant knowledge”), and his knack for storytelling.

Over the better part of the last decade, Arthur and I have kept in touch, meeting once or twice a year — often with Bob and my husband Yoshie — to eat and kibitz. During that time, he has become both a friend and a role model, and someone whose work I turn to frequently (particularly his book “Jewish Home Cooking: Yiddish Recipes Revisited”). So when I heard about Sadelle’s, a new artisanal appetizing restaurant in Soho, I knew I wanted to try it with Arthur. 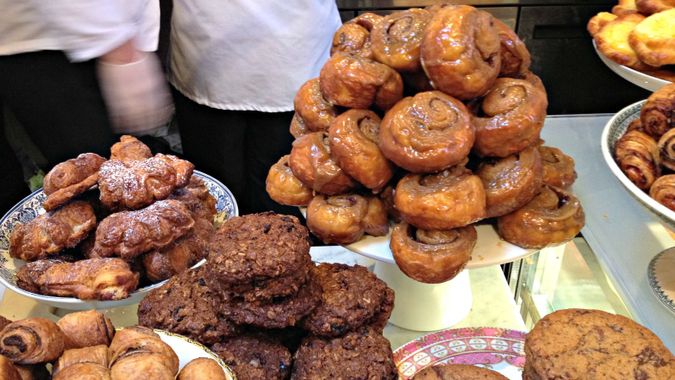 Sadelle’s is essentially an upscale breakfast joint — a place serving beautifully prepared Ashkenazi classics from whitefish salad and sable on house-baked bagels to rugelach and jam-glossed cheese danishes that gleam like coins. The space, with its marble countertops, dazzling flower arrangements and servers in pressed white jackets, felt more like a Parisian bistro than last century’s Jewish dairy restaurants. It seems to thrive in an elusive sweet spot between old world and new.

Arthur walked into Sadelle’s a few minutes after I did. I stood up to greet him, but something caught his eye and he hung a sharp right toward the fish counter. It turns out, he knew one of the slicers — of course he did! Shortly after, two editors (one current, one former) from a food magazine I occasionally write for came up to greet us. One of them recognized Arthur and I felt a little thrill at being spotted in his company, even though I was the one making introductions.

We ordered and then got down to the work of catching up. I shared a photo of Max. He told me about a book he’s working on, which will center around the foods he cooks everyday. We gossiped a little. And he regaled me with his usual stream of memories that seem to rise up to the surface of his brain like seltzer bubbles.

“My father was a hunter-gatherer cook,” he said. “He couldn’t actually cook, but he knew where to go to assemble a great meal.” For the big Sunday breakfasts Arthur ate with his parents and grandparents when he was growing up in Brooklyn, that meant the Jewish bakery around the corner from his house.

“He would take the dog and walk to the bakery with the paper tucked under his arm,” Arthur said, “then stand on line with all of his friends.” The small seeded rolls his father brought home were spread with butter or cream cheese and paired with whatever cured and smoked fish he had picked up earlier in the week. 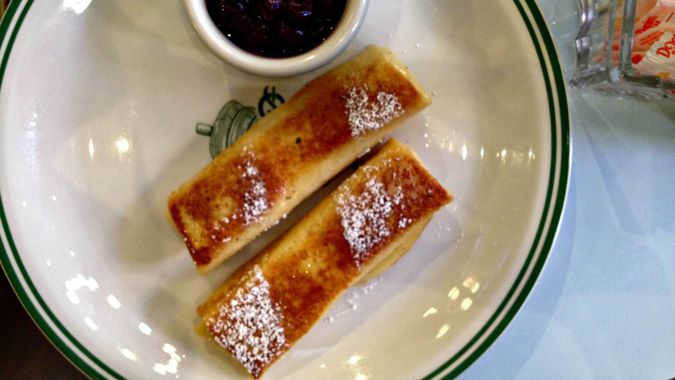 Back at our table, the waiter delivered a plate of blintzes — golden from their sizzle in the pan, flecked with vanilla bean and filled with soft, mild cheese. The house-made preserves that came on the side were a seasonal Concord grape, he informed us. Curiously, the jam was missing the cartoonishly “grape-y” flavor Concords are known for. It was also seedless, leaving us to imagine some poor line cook taking a straightened-out paperclip to each grape to pop out the pips. Could it maybe be late-summer plum jam instead, we wondered? Fortunately, it was too tasty to quibble over for long.

“Growing up, my grandmother made hundreds of blintzes every Shavuot,” Arthur told me. “She had these long, manicured nails that she was very vain about, but she would file them down once a year so they wouldn’t tear the blintz leaves as she rolled them.” 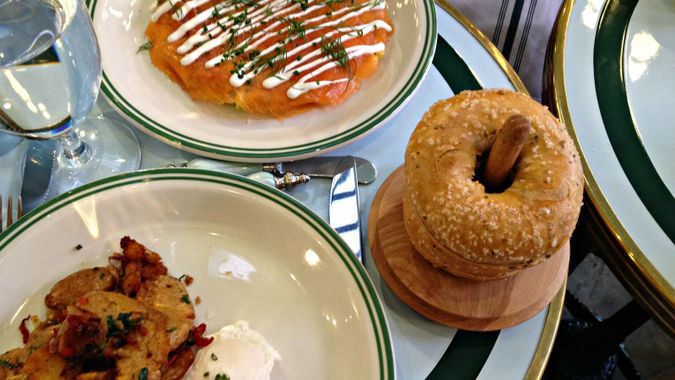 In his book “Jewish Home Cooking,” Schwartz calls lox, eggs and onions “one of the most sublime creations of the Yiddish kitchen.” The Sadelle’s version (top) was decidedly different, but entirely delicious.

Next out of Sadelle’s kitchen came a pair of poached eggs, a pile of distressingly good fried potatoes and an everything pumpernickel bagel with chive cream cheese for me. The bagels at Sadelle’s are small, chewy and dense but not overly bready — closer, Arthur told me, to what bagels in New York used to taste like before they got Americanized and super-sized. Arthur had a plate of lox, eggs and onions with a salt-and-pepper bagel. In “Jewish Home Cooking,” Arthur calls lox, eggs and onions “one of the most sublime creations of the Yiddish kitchen.”

He raised an eyebrow as the waiter set down the restaurant’s version of “LEO,” which was served as a pancake-shaped omelet draped with fish and squiggled with créme fraîche rather than as the messy jumble of scrambled eggs he ate in his youth. But after a few bites, Arthur gave the creative presentation a pass — it was delicious.

Just before leaving, as I ordered two sticky buns to go, Mimi Sheraton — the former dining critic for the New York Times and author of many cookbooks — walked in and took the table next to us. Clearly Sadelle’s opened recently enough that New York’s food luminaries are still making their rounds. We chatted for a few minutes — or rather Mimi and Arthur mostly chatted. For the first time all morning, now sandwiched between two culinary greats (the latter of whom I was meeting for the first time), I felt very aware of my comparative lack of expertise. I was content to simply listen.

With the check paid, as Arthur and I prepared to part ways, the subject of our first full meal together — at an Israeli-style grill in Midwood — came up. “You had a plate of hummus with onions and mushrooms,” he said.

“I think you’re right!” I answered. “But how on earth do you remember that from almost 10 years ago?”

Sizing Up Sadelle’s With the Great Arthur Schwartz