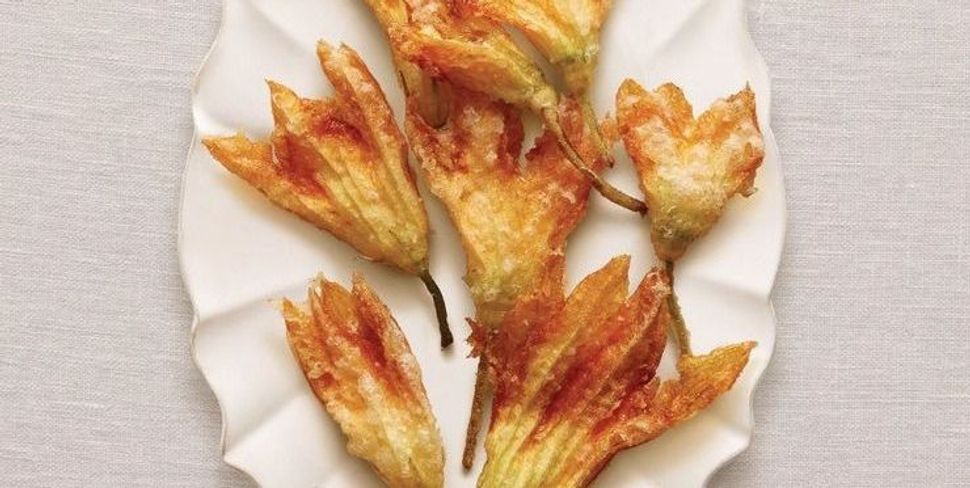 This is an occasional column in which the writer evaluates a new cookbook by making some of its recipes, sharing the dishes with friends and asking her guests what they think of the results. She recently cooked her way through “Tasting Rome: Fresh Flavors & Forgotten Recipes from an Ancient City,” by Katie Parla and Kristina Gill (Clarkson Potter).

Regular readers of this column may wonder why they’re about to read a review of an Italian cookbook rather than a Jewish one. The answer is that somewhere in my web wanderings, I read that this book had a sizable Jewish section, and knowing nothing about Roman Jewish cuisine except for fried artichokes, I immediately sought it out.

As Katie Parla and Kristina Gill write in the book’s introduction, “We pay special attention to two minority cuisines, Roman Jewish and Libyan Jewish, because a discussion of Roman food culture would be incomplete without recognizing the contributions of the cucina ebraica romanesca and the more recent cucina tripolina. Although the Jewish community has just 13,000 members, about .3% of the city’s total population, the flavors and history of its dishes are so profoundly rich, they warrant special attention.”

It’s gratifying to see these cuisines highlighted in this way by the authors, two American expats who live in Rome. Parla is a food and beverage writer and frequent contributor to travel guides, while Gill is a photographer and food editor.

It would be remiss of me not to mention that outside of the Jewish recipes in the collection (less than 15 by my count) there’s a hell of a lot of pork, including a whole section devoted to guanciale (whole cured pork jowl), so just be forewarned about that. But at the same time, there are plenty of Roman dishes that are not specifically Jewish, but don’t include treyf, which would not be out of place on a Shabbat table. So while the Jewish section is of special interest, there are many other tempting recipes for those who keep kosher, like simmered beef with tomato and onion; baked tomatoes stuffed with rice; and a savory rustic pie made of chard, dandelion greens and ricotta, to name just a few.

The good news is that in spite of that, we loved nearly everything we made, and were glad to be introduced to some dishes that would never have crossed our tables otherwise. Having said that, we did have to make some pretty major modifications to two of the recipes.

This book had a cocktail section, and we enlisted my husband Paulie to play bartender. He chose the carbonara sour, a simple recipe (none of these are specifically Jewish, and certainly not this one, which normally includes guanciale-washed vodka, as it’s a play on the popular bacon-and-egg-sauced pasta dish). For the sake of Forward readers, we skipped the guanciale and used vodka straight from the bottle, and though I realize that without the guanciale, the carbonara sour is no longer a carbonara, we still found the drink — which included simple syrup, lemon juice, egg white and freshly ground pepper — a light and refreshing way to start a summery meal. My friend Mica commented that it was like a cocktail version of lemon meringue pie.

With all other dishes I stuck to the Jewish recipes, and found that I had quite an interesting selection to choose from. For an appetizer, I picked concia, fried and marinated zucchini, because it was a way to celebrate the arrival of zucchini in my CSA box. In this recipe, zucchini are sliced and fried, and then marinated in a mixture of white wine vinegar, garlic and mint. The finished dish is drizzled with olive oil and more fresh mint or basil.

The first thing I noticed when Sandy brought over the finished dish was how a hefty bag of zucchini (possibly six or seven) had shrunken to fit into a small container. This is a great way to solve the age-old problem of “what am I going to do with all this zucchini?”

However, we served this dish as an appetizer, and found it much too acidic to be eaten on its own, with Paulie noting it stuck to the roof of his mouth. Only Sandy’s husband Stuart liked it as it was. Mica guessed that this method was a way of preserving it, and Sandy wondered whether sherry vinegar wouldn’t have been a bit less bracing. We all thought it would be much better as a condiment than on its own, and that it could be excellent served with a charcuterie platter or as part of a mezze selection, or served on a crostini with a creamy cheese. The book said it could be served on its own or as a sandwich filling, but we declared it a condiment.

I knew what bottarga was, but had never served it before. According to the headnote, this dish became popular among the Libyan Jewish community in Rome, and a restaurant called Nonna Betta in the Jewish Ghetto still serves a spectacular version of it today.

This is a simple dish to make, starting as so many pasta dishes do with garlic and red pepper flakes sautéed in olive oil. The greens are blanched and then chopped (after squeezing out the water, of course) and then added to a bowl of cooked pasta, with the grated bottarga and optional Pecorino Romano cheese tossed on top.

A note about bottarga: This is delicious — and expensive — stuff. The roe are harvested from red mullet (and sometimes tuna, though that product is inferior, according to some) and cured until it becomes a hard slab.

We found several things problematic about this recipe. One, it called for two teaspoons of red pepper flakes. I knew that would be too much, so I halved the amount, which turned out to be the right decision. Second, we were stymied by the fact that the sautéed greens were just tossed into a bowl with the pasta; the traditional Italian method of using some of the starchy pasta water to help bind the sauce was not mentioned. We did this step anyhow, and still found it needed a bit more olive oil to make a proper sauce. Lastly, this particular complaint may be coming from a group of greens-loving Bay Areans, but we felt the greens-to-pasta ratio was way off. Two bunches of dandelion greens (which was more than the one pound called for) to one pound of pasta was not nearly enough; we all wanted more greens. When I reheated the leftovers later, I added an entire new bunch of kale to what was left, and that ratio suited us much, much better.

But once we were done tinkering with this, we loved the flavor combination, and how hearty it was, and how foreign it was to our palates as a Jewish dish. While the pasta just with the greens and pecorino would have been delicious, the bottarga took it to another level, making a simple dish a splurge.

For our main, we served polpette di pollo in bianco, or chicken meatballs in white wine sauce, from the Tripoli section, and this dish was a stunner. Ground chicken is mixed with ingredients including bread softened in chicken stock, pistachios, parsley, cinnamon and nutmeg, and then simmered in a chicken stock and white wine sauce flavored with shallots.

Our only issue with this dish came again with the cooking, as the shallots were minced and then sautéed in the pan and when the meatballs were put in later, the shallots started to brown too much before the liquid was added and the meatballs were fully cooked. We ended up taking the meatballs out and cooking them in a different pan so as not to burn the shallots. Sandy griped that she hates cookbooks that say “salt to taste,” feeling that cookbook authors should have their own palate and point of view and express it to their readers with specifics. We cooked a small meatball by itself to make sure we had salted correctly.

These things aside, we all thought this dish was a major winner, with it eliciting such reactions such as “fabulous” from Sandy and “oh, wow” from Mica. Stuart used his leftover zucchini as a condiment for the meatballs. (When we heard an “oh yeah!” from him, and we all did the same.) Paulie said the texture of the meatballs was perhaps the best he had ever experienced.

You get the picture. Make this dish. Given that we had a pasta course, we served the meatballs on their own, but rice or another grain would be advised to soak up that wonderful sauce.

When I first glanced at the dessert section, I thought I might have to make some kind of sweet matzo fritter for dessert, so I was thrilled to stumble upon the torta di ricotta, or sheep’s-milk ricotta cheesecake, which is considered a classic in the Roman Jewish tradition. Made with sour cherry preserves and a sponge-cake bottom, this is like no other cheesecake I’ve had.

First you make a sponge cake and cut it into two rounds when it cools. You can freeze the second half for making another cake later. The sponge serves as the bottom instead of a crust. The cheese layer is made with whipped sheep’s milk ricotta (this is essential; don’t buy the regular grocery store version) and cream cheese with some heavy cream and sugar, and the sour cherry preserves. The sponge is brushed with a layer of preserves before putting the cheese layer on. This is a “no bake” cheesecake, meaning it just goes in the fridge for four hours or overnight to set. Before serving, more cherry preserves are poured over the top.

Paulie said this was so much better than your garden-variety cheesecake, and we all agreed. Mica loved that it wasn’t the baked kind, and added that the sponge could have been doused with some kirsch brandy as well. While we loved the sour cherry version, I may use the second half to try another jam like plum or apricot. I also loved that this dessert wasn’t overly sweet.

In summary, this is not a book for beginners. Stuart noticed that the book had an introduction that deals with essential equipment and ingredients one should have in the Roman kitchen, but we all wondered about the pasta recipe missing that essential step of reserving some of the cooking liquid to use in making the sauce. Was it assumed that we just knew to do that? (We did, but others might not.) The other pasta dishes do have that step. Was it just missing from this recipe? We’ll never know.

What we do know is that with some modifications, we had an absolutely fabulous meal as well as a small window into how the Jews of Rome eat. And that made us want to make these recipes again, soon. Either that, or book an airline ticket.