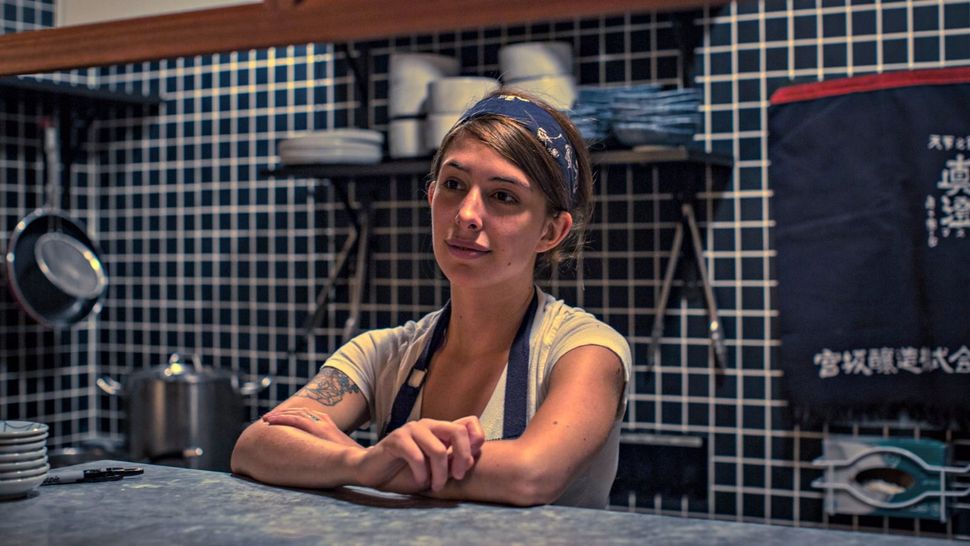 Not bad for a Jewish kid from New Jersey whose first cooking experiment was matzo ball soup.

“I still serve that soup at holiday meals in my restaurants,” laughed Peet, who earned her stripes at venerated Big Apple hipster kitchens like Shuko and Frankie’s. “On holidays, I volunteer for brisket-and-matzo-ball duty.”

“Washoku means a diverse meal, with at least five colors and five preparations of food,” Peet explains. “You wouldn’t have meatloaf and mashed potatoes in that kind of meal. And yashoku refers to Western food Japanese people adapted after World War II. My potato salad isn’t fusion, for example — it’s something you’d see at a Japanese bar. And the Japanese have this amazing fascination with pastas. If you’re Jewish, I think that kind of adaptation is especially interesting, that culinary relationship with countries after the war.”

A typical Karasu menu — emblazoned with the restaurant’s namesake, a stylized black bird — might also include scallop sashimi or sunumono squid salad next to duck wings with spicy sesame sauce and pasta with cod roe.

“When I was a kid, my uncle and grandfather always took take me into the city, and we’d eat at Peter Luger at Christmas,” she recalls. “It was us, the other Jews, and a lot of Chinese families. We’d all line up at the same time every year — we’d recognize each other. Then we’d go to Kossar’s for bialys. Even though we were stuffed, we’d eat them in the car. You have to eat them hot.”

Peet grew up in a Reform household as a “tri-State Jew — bagels and lox, a total stereotype,” she said, laughing. Her first culinary memory was her grandmother’s notorious brisket. “It was so bad,” Peet said. “She cut it the wrong way — with the grain instead of against it. She was famous for it.”

At culinary school, Peet studied classical French techniques. “But I always loved everything Japanese. Even as a kid, I was a total nerd about things like instant ramen. I thought it was totally cool,” she said.

Though she’s modest about her qualifications, Peet pursued the study of sushi-making with typical zeal. “The only way you can get true certification as a sushi chef is from this school in Japan, and that’s only if you’re Japanese and a man,” she said. “But masters who studied there came to the U.S. and set up their own places. The real way to learn is apprenticeship, and Shuko was mine. I’d say I’m the grandchild of a certified master — I learned under the people who learned under him. But I’m in no way a master — not even close.”

While working at Shuko, Peet got another education. A New Yorker named Margery Cohen — better known as the samurai in Samurai Sharpening Service — taught her the rarefied craft of knife-sharpening. “Margery is a Jewish woman who spent time in Japan, so we connected,” Peet said. “And once I became avid as a knife-sharpener, it changed me as a chef.” Until she opened Karasu, Peet was still sharpening knives weekly for customers of Manhattan kitchenware emporium Whisk. “At this point, I’ve got no time, and I’m exhausted,” she said.

Shalom Japan, Mu Ramen, — why the affinity between Jews and Japan? “I have to be honest: I don’t know, but it’s definitely there,” Peet said. “A lot of my friends who work in Asian food are Jewish. Maybe it’s because the cuisines are so different. And most of the Jewish people I know have affinity for travel. [Ivan Ramen founder] is a big hero to me. He paved the way. He moved to Japan 20 years ago, and was a total outsider. But I ask myself why I fell in love with it. And I don’t know.”

“I didn’t want to smash the system,” she said. “I had an opportunity. The people at Shuko were forward-thinking enough to have me there and not care about my gender. Not everyone will do that.”