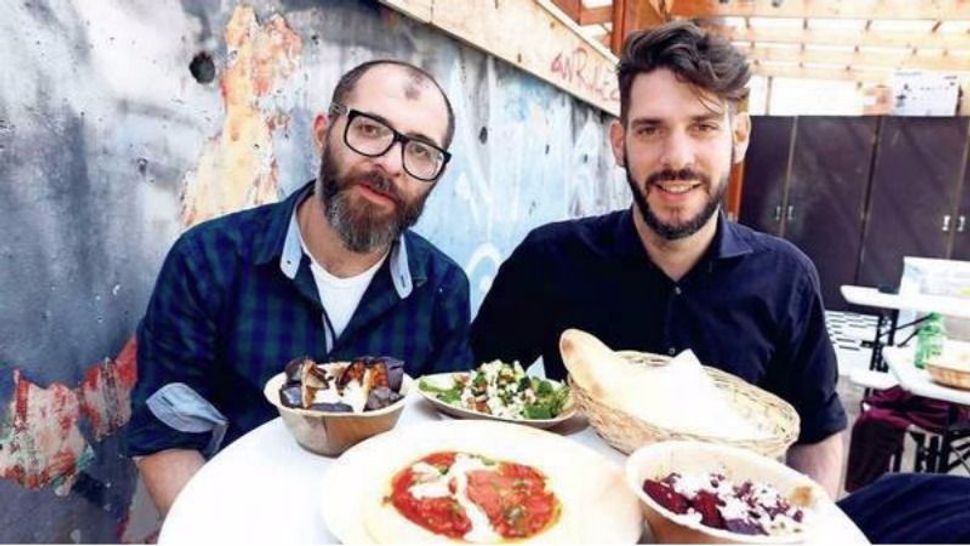 Kanaan — a casual, vegetarian Middle Eastern restaurant named for the biblical lands before they were conquered by the Israelites — is something of a dream come true. And that’s not just because its hummus is “oh yes,” as one German blogger recently described it.

Rather it’s the result of a unique partnership between its 30-something owners, Oz Ben David, who grew up Jewish in Beersheba, and Jalil Dabit, an Arab Christian from Ramallah. 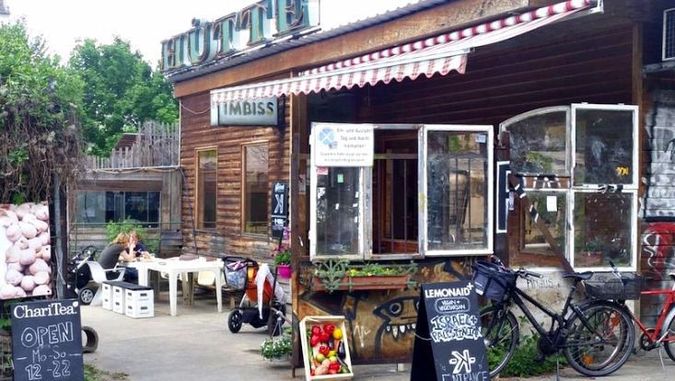 Kanaan is run by Oz Ben David and Jalil Dabit, who met through mutual friends in Berlin. Image by Facebook

The duo met in the German capital, where they are trying to turn a culinary dream into reality. Before the men ever met, they had separately nursed the same idea: to draw upon their heritage to create a delicious, modern cuisine. And, of course, to earn their living by it.

Kanaan, which opened a year ago, is a unique hybrid, where the Arab cuisine of Dabit’s grandfather meets the recipes of Ben David’s Moroccan and Romanian grandmothers. In some ways it’s an “only in Berlin” phenomenon, thanks in part to the city’s relatively open attitude toward foreigners. Berlin boasts a small but lively Israeli population (estimated at some 10,000) and a significant number of Arabs of Palestinian origin, which some estimate at about 35,000.

These facts, along with Berlin’s famously low cost of living, made it an ideal spot for two non-Germans to test the waters of an unusual restaurant concept.

On a typically cloudy August evening in Prenzlauer Berg — a hip district that’s akin to Brooklyn’s Williamsburg both in terms of its uber-hip character as well as its more recent evolution into a family-friendly spot — children are playing in Kanaan’s outdoor garden while adults sit under large café umbrellas, dipping soft, fresh pita into silky smooth hummus and munching on roasted cauliflower glazed with a date honey sauce. The restaurant, tucked in a corner overlooking the commuter railway tracks, is a bit of an oasis: lush vines have grown around the outdoor dining area, and small flowers trail from a makeshift arbor.

In other words, it was a perfect, peaceful spot for an Israeli and a Palestinian to set up shop.

“It’s so crazy how we met,” said Dabit, 34, who shuttles back and forth from Ramallah to run Samir, the famed restaurant of his late grandfather and father. Two years ago Dabit’s Israeli girlfriend, who was studying at the University of Potsdam, urged him to settle down in Berlin.

He agreed but told her, “I need to do something.” For a year he absorbed the scene, “to understand people and see how it works. And food, food, food was always the thing.”

Separately, Ben David, 36, a marketing expert, was itching to try gastronomy. It seemed fated that the two should meet.

“It was like a road we almost couldn’t resist,” Ben David said.

Before meeting Dabit, Ben David watched Oren Rosenfeld’s 2015 film “Hummus! The Movie,” which featured Dabit and his family’s Ramallah restaurant. In the film, Dabit muses about opening a place of his own in Berlin.

But when mutual friends suggested they meet, Ben David hesitated — he said his father was worried about him working with an Arab from the West Bank. And, as it happens, Dabit’s father had his own doubts about his son setting up shop in Germany, as he didn’t want to lose him as a business partner.

But Dabit finally appeared in Ben David’s office and said, “‘Listen, I need to bring a good excuse to my father to leave the business in Israel,’” Ben David recalled.

“I told him about my story and what I wanted to do,” Dabit said about his plan to open an eatery featuring his family’s best recipes from the Ramallah restaurant. “And he liked the idea.”

“From the moment we decided to work together, I can’t say it was easy,” Ben David said. “We did not have money, we had no place, no EU passports, and there was a lot of competition for space.”

Last summer, after stalking various short-order joints around town, they approached the owner of a restaurant, a German of Lebanese background, who also owned the shack across the street. At the time, the underutilized space operated as a pizzeria in the evenings.

“I came to this German man with my Israeli temperament,” recalls Ben David, whose dark hair is pulled into a bun. He proposed to work lunchtime only; a test to see if people liked their food. They scheduled a trial run and organized an event, the “Hummus, Fashion and Peace Connection,” a tasting-slash-dance party, to show off their talents.

The event drew many hundreds of guests over two days, Dabit and Ben David said, and Kanaan eventually opened as a full-fledged restaurant — and both fathers came around.

Back in Ramallah, Dabit told his father, “Baba, we opened a restaurant.” He promised to bring him to Berlin to see the place, but Dabit’s father died before the plan came to fruition. Still, Dabit said his father had understood and approved of his plan.

“My father knew all my life that I am doing a lot of things,” Dabit said. “I am a strange bird.”

Ben David’s parents had a harder time with his decision to live in Berlin.

“They would prefer me being close to them,” he said. “But they are happy to see me successful and making my dreams come true. And they come to visit me a lot.”

Kanaan’s cooks use the former pizzeria’s kitchens across the street, as well as the second one in the shack. Among the employees are recent refugees from Eritrea and Syria, who are permitted to earn money while studying the German language. More than a million refugees, mostly from Muslim and African countries, have poured into Germany over the past year.

“We have had an English and Russian teacher from Syria; we have had many young people age 18, 19, with no profession,” Ben David said. “We teach them how to cook.”

In the kitchen on this night, standing at a pot filled with chickpeas, is Tamir, a 34-year-old Druze refugee who ran a clothing store in Syria. His wife, expecting their first child, is an agricultural engineer. They feared for their lives in Syria, Tamir said.

“Germany is afraid of refugees, but demographic change is something that every society has to face,” said Dabit, whose family restaurant has employed Arabs, Christians and even Jewish immigrants from the United States. “Are we going to miss the opportunity and see a crisis, or use the opportunity to make us stronger?”

Ben David and Dabit are seeking out other opportunities, too. They want to become a household name — through Kanaan for now, but eventually through cookbooks, television and a showroom for their food products. They recently opened a smaller venue in the Kreuzberg section of Berlin, an area that has become home to much of the city’s new Israeli population.

“In five years we are planning to be the biggest food company producing Middle Eastern food in Germany,” Ben David said.

They are also planning a “Spice Dreams” program – a spice packaging enterprise that would train refugees and teens from disadvantaged socioeconomic backgrounds to help them “learn about business and have goals,” he said.

For now, however, Dabit and Ben David are working to win over locals who are not necessarily familiar with Middle Eastern foods. The trick?

“Put something they are familiar with inside,” Ben David said.

For example, the partners mixed the familiar favorite hummus with either shakshuka (eggs poached in a spicy tomato sauce) or crisp Moroccan potato pancakes — prepared with tahini instead of egg as a binder. Just like that, two of Kanaan’s signature dishes were born.

“It was obvious,” said Dabit, his eyes twinkling from behind black-and-white-rimmed glasses. “We need to touch people in a different way. Our message is that when we combine things together, it’s always better.”

Toby Axelrod is JTA’s correspondent for Germany, Switzerland and Austria.